Grower and livestock producer Jordan Reimnitz has seen the benefits of going completely no-till on his family farm.

“Since everything starts at the soil level, building a resilient soil is a big goal of mine,” Jordan says. “Whether through wet or dry or cold or hot conditions, I want a soil that can protect me in those situations and be resilient without costing me a crop.”

Jordan jointly farms with his brother,Seth, and their father, Sam, no-tilling corn, soybeans, wheat, hay and alfalfa and raising cattle.

Jordan’s father started no-tilling in the mid 1990s on land that had previously been tilled. Jordan came back to the family farm in 2004 and worked for his father for a few years before buying his own land, which he no-tilled in part to avoid the extra expense of tillage equipment and extra labor. “Most of the land that I’ve acquired has only been no-tilled since I got it, so I’ve had to start at ground zero with improving the ground,” he says.

But as Reimnitz got into it he looked at the soil in his fields and thought they needed something else. At first, he couldn’t pinpoint what it was.

In 2008, he started seeding cover crops, ramping up coverage each year to include 100% of his acres in 2014. He says keeping plants growing throughout the year is decreasing erosion and improving water infiltration. “With our rolling ground, if the water runs off, usually the low areas will be the trouble spot. The cover crop allows the water to infiltrate up in the hills and not run down into the bottom, which has also helped me get into the fields quicker.”

He says cover crops are also preserving his soil structure. “I like to see roots in the soil. I want to see a plant covering and protecting the soil, and I want to see worms. Having that living root out there as long as possible feeds the microbial activity in the soil,” Jordan says. “You can’t ignore the fact that there’s a lot of living organisms in there.” 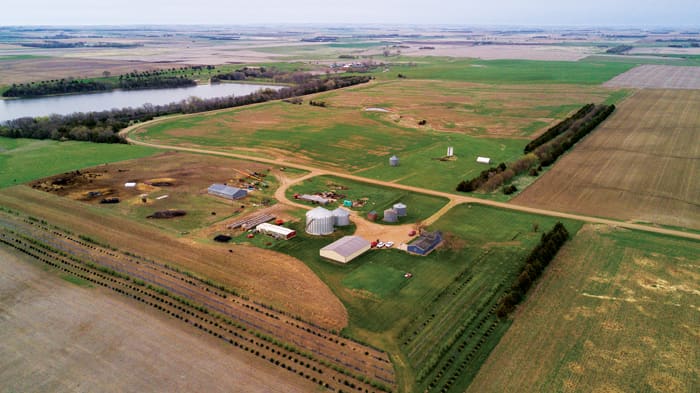 GATHERING DATA. Farmer and livestock producer Jordan Reimnitz uses variable rate seeding using his Precision Planting 20/20 system. Reviewing his data shows him areas he can improve his operations, like how it showed him he often had too much downpressure, which he is working on correcting.

For the past several years, Jordan has also been planting cash crops into living cover crops. He says the method is adding diversity and creating balance, especially with insects. “Instead of having a problem with a certain pest, you have other bugs that manage that,” he says.

Jordan uses a John Deere 1890/1910 air seeder drill to plant cereal rye at a rate of ½ to 1 bushel per acre after his corn and soybean harvest is over, eliminating the need for hiring extra help.

“When I put the combine away for the season, I get out the drill that will plant cover crop for a week instead of doing tillage,” he says. He adds phosphorus (P) and potassium (K) in-furrow when seeding his cereal rye to get it into the ground instead of on top and so he doesn’t have to worry about it in the spring.

Waiting until after harvest does have its drawbacks, as it usually means he doesn’t get the cover crop planted until November. That’s not ideal for South Dakota with its northern climate, and it was a problem with the wet weather in the fall of 2018, when soaking rains and an early freeze prevented him from getting his cereal rye seeded.

In past years, even though the cereal rye wouldn’t grow much, if at all, before winter, it normally takes off quickly in the spring and will be 2-6 feet tall by the time he plants his corn or soybeans.

Jordan uses glyphosate to terminate the cereal rye and has varied the timing, doing it either a few days before or a few days after no-tilling his corn or beans. But for the last couple of years, he has tried a new strategy: waiting until after emergence to terminate, which could be a couple of weeks after seeding. “After you kill the cereal rye, especially if it has any growth to it, it really dries out the ground and I feel that it slows emergence and maybe even hurts germination because it dries out the ground so much,” he says, adding that he knows this isn’t the conventional way of approaching it. “It’s kind of bucking the way guys usually do it but it’s my opinion,” he says. 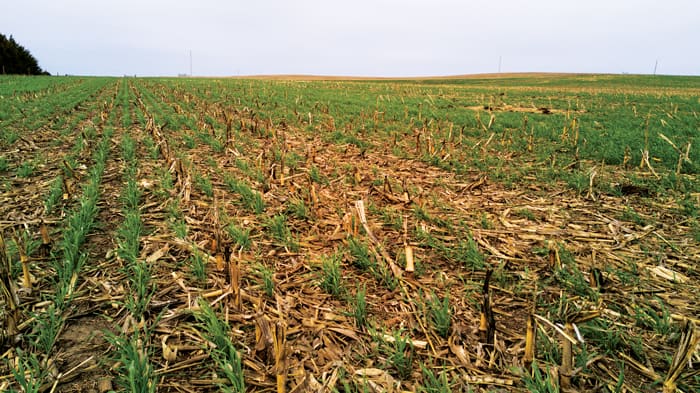 FEEDING THE SOIL. Cereal rye grows in corn stubble on the Reimnitz farm, providing a living root to feed the soil biology. When the weather cooperates and the crop rotation makes sense, Jordan is sometimes able to grow the rye to maturity and sell his excess seed.

He no-tills his corn in 30-inch rows with a John Deere DB60 24-row planter, running a 6-24-6 starter in-furrow and dribbles 28% UAN out of dual tubes from the back at a rate of 10 gallons per acre. Later in the season, when the corn is about 2 feet high, he uses a Willmar 600 dry spreader to topdresses with ammonium sulfate (AMS) and urea.

Currently, his planter is fitted with Yetter SharkTooth row cleaners and Dawn Curvetine closing wheels. This year he’s adding an Ag Leader hydraulic down-pressure system, which he hopes will help with seed placement on his rolling ground. He has struggled with getting proper seed depth, something he learned from feedback provided by his Precision Planting 20/20 monitor.

Jordan usually no-tills his soybeans with the same air seeder he uses for cover crops. It is set up for 10-inch rows but he likes to put seed in every other row and fertilizer in the others, giving him 20-inch rows.

Jordan’s family has also begun focusing on integrating livestock grazing on cover crops to improve soil health. In spring of 2016, he turned his 40 cows out to graze for the first time.

“I grazed my cows on the field for a month because we had record rainfall that May, and I still raised one heck of a corn crop off there,” he says.

“This cover allowed me to get them out of the lot early, get them grazing and let the grass get going a little better in the spring,” he said.

When planning to graze the cover crop, Jordan plants a diverse mix that could include radish, common vetch, hairy vetch, clover, millet, sorghum-sudangrass, turnip, lentil, oats and buckwheat. He’ll also uses this mix after wheat, which he hasn’t planted much of in recent years, but still keeps in his rotation when it makes sense for diversity.

Jordan says going to no-till has been pretty easy financially, especially for someone just starting out. He says there have been no added costs in his case, although going into cover crops was a harder decision because it takes money and time up front. His cover crop seed alone generally runs about $2-$4 per acre, plus there is additional fuel, wear and tear on the drill, and his time to consider.

“But long-term, I’m looking to see the benefits of covers. If I can put it in at a reasonable price, hopefully over the years it’ll start paying me back, even though it’d be hard to put an actual number on it,” he says. In addition, growing covers for grazing has helped him cut winter feed costs for his cows. "If I get good growth in the spring, I can get a month or more of grazing before planting. I can also graze after wheat for a month or two until they can be turned out on corn stalks," he says. He can keep costs even lower by growing his own rye seed and even selling seed if he has more than he needs.

Jordan thinks of the next generation when he weighs the economics of it all. “I have to think about what I want my land to be like for my kids; I want to leave my farm the best way I can leave it.”