Kansas no-tiller John Stigge believes cover crops can deliver in year one if growers utilize the ‘power of 3’ that includes legumes, brassicas and grasses.

Pictured Above: TAKING OFF. No-tiller John Stigge likes using mustard as a cover crop because the brassica put roots down deep, and laterally, which helps free up phosphorus for soybeans, he says. But he tends to use them in a blend because their rapid growth can overpower other species.

One thing that discourages some no-tillers from adopting cover crops is a concern they won’t bring an immediate payoff.

But if growers think about their goals, do some careful planning and commit to regular soil testing, John Stigge believes cover crops can pay off the first year.

Stigge has been seeding cover crops for 27 years but can still remember working through mistakes and hard lessons in choosing which varieties and mixes work best for his operation.

“Cover crops have opened up doors that I never knew existed and helped me develop a whole new way of looking at agriculture,” says Stigge, who no-tills corn, soybeans, wheat, oats, milo and raises livestock on 2,000 acres near Washington, Kan.

“It’s brought us positive incomes in these years when grain cannot, and I’ve found grazing covers accelerates soil microbiology big time. Soil-organic matter levels are doubling and tripling on our farm. And most of that’s come with just in the last few years since we’ve kind of figured things out.”

Brassica roots exude an acid that splits the calcium away from phosphorus, sulfur and other minerals to make them available — possibly even in the first year’s spring in some states if they’re seeded early enough, Stigge says. Soil tests may show reduced or even no need for additional P application.

“Because of all these nutrients around the plant, brassicas also attract and support the microbial community that works for you,” he says.

Stigge has used mustard in his cover-crop mixes and notes their power to put roots down deep, “and it puts them laterally, too,” he says. “Most of your mustards root down pretty well. It’s great for freeing up P for the soybeans.”

He mentioned a grower in Kansas who last spring drilled in cover crops ahead of soybeans during a very cool spring, which retarded their growth. He terminated the mix except for one strip where he and his partner planted soybeans and terminated it with the first post spray of Liberty.

“Where the mustard was, the soybeans were two to three inches taller and greener. Now, is that just one year? I don’t know.”

Stigge suggests using brassicas in a blend because they may overpower other species. He goes down to 2 pounds an acre for radishes and 1½ pounds an acre of mustard, knowing they’re smaller seeds and grow very well.

“Soil test every year,” he says. “It’s the cheapest thing you can do. And recognize brassicas are exceptional scavengers and we’ve got to keep the nutrients in the soil.”

Stigge’s favorite brassica is a bayou kale-rapeseed cross that he says has exceptional root structure.

“The first year we tested it against radish and its roots were deeper than the radish. And they’re great for grazing. I like to pull the leaves and chew on them when I’m going through a field. They’re sweet.”

He also found the kale-rapeseed cover attracts aphids and other leaf-eaters. “When I first saw that, I go, ‘Oh my God. We’re going to scratch this.’ And then 3 days later there are these yellow and black bugs in there, and I say, ‘What have I done?’ And, I wasn’t going to spray.

“Those were predators. The leaf-eaters and aphids were gone. Underneath the leaf veins finally appeared a bunch of eggs.”

Stigge finds Daikon radish is great for loosening the top soil and has a good taproot, but he can’t afford to lose nutrients to them. “It’s difficult to do in the grazing programs because cattle will not eat it until after the first freeze because the leaves are bitter,” he notes.

Purple-top turnips are often put into standing corn, especially where seed corn is grown, and they make tremendous cow grazing during winter, he says. “They’re cheap and they’re very reliable.”

Stigge has done some work with sunflower in mixes, noting the broadleaf annual’s big taproot seems to alleviate stratification issues.

“This is one of those species I found needed to have another plant root going down with it besides the sunflower to get maximum benefit. I don’t know why. And I judge that by the next crop and then by digging around in the soil,” he says.

Legumes are the expensive part of any cover crop seed mix. In fact, normally legumes should cost at least half of any good mix, but they are vital, Stigge says.

Legumes are notorious scavengers of nitrogen (N) but they will try to use all the free N in the soil. “Then they offer free room and board to the rhizobia bacterium, which fixes the needed nitrogen in its roots,” he says.

Clover, pea, vetch, lupin and beans not only fix nitrogen (N) but also feed mycorrhizal fungi that serve as the transportation network bringing nutrients from plant to plant, he says. And they aid in the formation of glomalin, a chemical that aggregates soil particles together.

Stigge says he tried to get by without having legumes in his mix for several years.

“I wanted to cheap my way out. I didn’t get the results I wanted. It’s the power of the three working together. Most of our increase in our water-infiltration rates and soil organic matter has come within the last 5 years.

“I try to always use coated, inoculated legume seed because I get more consistent, reliable stands,” he says. 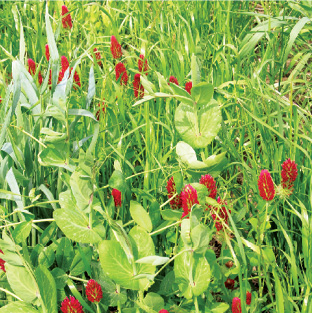 USEFUL TOOL. No-tiller John Stigge likes to use crimson clover as a legume in his cover-crop mixes, flying it on along with annual ryegrass. He works with Berseem clover, a warm-season variety that isn’t as slow-growing as crimson. He also seeds Persian clover and has found it to be excellent for haying and grazing.

Vetch cover is good for grazing and fixes a lot of N in the spring, but it must be terminated later in its life cycle and that can understandably cause issues for those no-tilling corn early, he admits.

Stigge is using a Naomi Wooly Pod vetch variety from Australia that nodulates after only 7 days and a Cahaba vetch in summer.

Stigge also seeds a lot of cowpeas. They’re one of the most expensive options for fixing N but he uses peas for grazing. “Recognize that at 37 F in spring or fall, cowpeas die. And I mean, not just in one field — they all die,” he says. “They’re very reliable, but you can only grow them in the summer. If you’re in a corn-and-soybean-only rotation, forget it.”

Stigge says he had problems getting spring peas to work but tried a TS7 variety from Australia and it performed well being mixed with oats. He plants a lot of Austrian winter peas in the spring because they don’t overwinter well.

“We came across Wyndham forage winter peas that overwinter and have used them for 3 years,” he says. “We like to use peas for 2 years before making a solid judgment on them.”

Stigge also makes use of crimson clover, flying it on with annual ryegrass. Berseem clover is more of a warm-season variety Stigge has worked with that isn’t as slow-growing as crimson, and he seeds Persian clover and found it excellent for haying and grazing.

Sunn hemp is another legume that can fix large amounts of N and has a large taproot to help build organic matter several feet down in the soil profile, Stigge says, adding that seed is more available now and the inoculants are better.

“The deeper we can get our soil organic matter, the more nutrients we can get into the plants,” he says. “I do not plant it thick. If you use wheat, it would go in after wheat because it needs heat.”

Stigge says grasses are an essential foundation to cover-crop mixes. He personally uses a lot of annual ryegrass because it’s relatively inexpensive and he considers it the “deep-root king.”

“Not only that, as soon as we started using it, our soil-organic matter started to jump,” he says. “It’s highly nutritious to graze and easy to kill.”

Cereal rye is a popular choice with many no-tillers for its late planting date, winter hardiness and other benefits.

“If you’re late with seeding you have to use cereal rye or triticale and it may damage the following corn crop” due to allelopathic effects as the vegetation is dying, he says. Seeds will stay dormant for 5-10 years.

Stigge says he “divorced” cereal rye because he couldn’t effectively manage it at times.

“There are huge varietal differences, which means there’s huge differences in the growing pattern,” he says. “I thought I had it down and then one year we had multiple fields with train wrecks.

“One year on our farm it was a good year for corn, and where we ran out of cereal rye our corn went to 170 bushels an acre, and the rest of the field was 75 bushels. That was a big hit, and it was difficult to explain to my landlord who lives in Scottsdale.”

Those grazing cereal rye need to pay attention to the growth stage. “Jim Gerrish says, to put it about as well as anybody I’ve ever heard, ‘When rye enters the boot stage, the food value is compost.’”

Oats are a great soil conditioner and hold their grazing value all through their life stage. He likes to also use oats with vetch, peas and a brassica for weed control in his organic program.

“After it dies, we graze calves out there through the winter, and they’ve never wanted anything else. We rolled a bale of alfalfa out after it snowed once and they used it for bedding.”

[Podcast] Strategies for Getting Off the Starting Block with Cover Crops: Part 2

[Podcast] Strategies for Getting Off the Starting Block with Cover Crops: Part 1

What is the best idea, information or advice you received from attending a previous National No-Tillage Conference, and how did it pay off on your farm?