One-Third of Growers Use Cover Crops for Grazing, According to Annual Study

Feed is the largest expense when it comes to raising livestock, so raising your own cover crops can provide a built-in feed source during winter months when other feed sources may be more costly.

In the 2021 Cover Crop Strategies Cover Crop Benchmark Study, only one-third of survey respondents stated that they grazed cover crops or rented covers for grazing last year. Out of those growers who did graze covers, 57% of them grazed less than 300 acres. These figures did not change much from the 2020 Benchmark Study results. 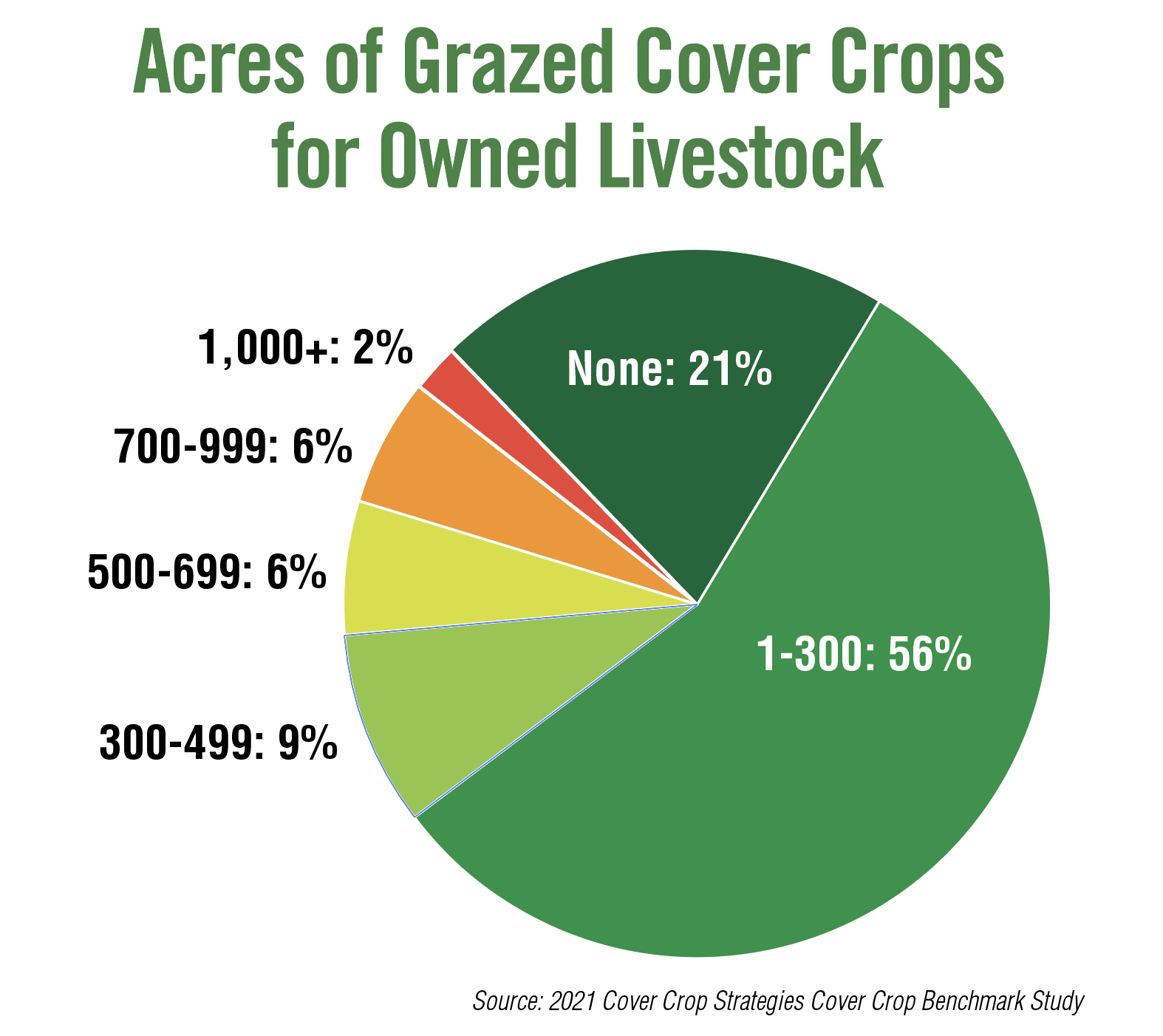 The study found the vast majority of growers don’t rent out cover crop acres for grazing, coming in at 71%. However, this majority owns livestock, so those growers are most likely grazing their own animals on any cover crop acres.

Sixteen percent of survey respondents rent out less than 300 acres of covers. For those 11% of growers who do not own livestock, yet are not renting out their cover crop ground for grazing, they may be missing out on an additional income stream.

This year’s top cover crop species for grazing was cereal rye, coming in at 59%, edging out last year’s winner, radish, by 5 percentage points. Rounding out the top 10 species were turnips (50%); oats (49%); sorghum-sudangrass (33%); crimson clover (29%); annual ryegrass (29%); sunflower (27%); triticale (26%); and red clover (24%). When compared to the top 10 grazed cover crop species from the 2020 Cover Crop Benchmark Study, hairy vetch fell out of the lineup, while triticale surged higher in popularity.

Beef cattle seem to be the most popular choice of livestock for grazing cover crops, with 87% of survey responses stating such. Dairy cattle came in second at 10%, with last year’s second most popular species, sheep, coming in at 6%.

Survey respondents were equally split when it comes to choosing which type of grazing system to utilize. Rotational grazing and open/unrestricted grazing tied at 49%, with open/restricted grazing bumping up 9% over the 2020 Benchmark Study results. It is important to note that an additional 22% of growers use mob/high density grazing, although the practice was down 6 percentage points from 2020.

When it comes to the feeding window for grazing covers, more than half of growers do so for more than 90. A respectable one-third chose 45-90 days, which is up 4% from 2020. Only 17% of growers indicated that they graze covers for less than 45 days.

About 60% of growers don’t bale cover crops for livestock feed, while 40% do bale them for feed. Using cover crops as silage is not very popular, as evidenced by only 17% of respondents doing so.

Although grazing livestock on covers provides soil health benefits, there are also benefits to be gained when it comes to animal performance and health.

Grazing livestock on cover crops can be a highly economical way to put weight on, according to the survey results. Seventy-five percent of livestock producers paid $80 and/or $100 per pound of gain for their livestock, compared to 25% who paid the same price to get the same pound of gain using pasture and/or regular feed.