The majority of growers grazed livestock on less than 300 cover crop acres and most do not rent out their acreage for grazing in spite of the income potential.

For growers who use cover crops, grazing is the next level of utilization if the proper opportunity presents itself.

A 2017 study by South Dakota State University found several measurable benefits of cover crops when integrated with livestock. However, the study stipulated that growers should consider other variable expenses when deciding whether or not to graze covers, such as costs to prepare the ground and plant, fencing costs and labor.

In the 2020 Cover Crop Strategies Cover Crop Benchmark Study, 70% of growers who indicated they grazed cover crops in 2019 grazed less than 300 acres with animals they owned. Another 9% grazed 300-499 acres of covers and 14% did not graze cover crops at all.

Those percentages look nearly the same when growers were asked how many acres of cover crops they plan to graze during the current growing season. Sixty-four percent of growers grazing covers expect to graze less than 300 acres, 15% will not graze any cover crops, and 10% will graze between 300-499 acres.

The study found the vast majority of growers don’t rent out cover crop acres for grazing, coming in at 83%. Twelve percent of survey respondents rent out less than 300 acres of covers, while a mere 3% rent out 300-499 acres. If cover crop acreage is not being used as feed for a farmer’s own livestock, then another income stream opportunity is being missed by not renting out those acres for grazing.

Similarly, growers did not anticipate renting out cover crop ground for grazing this year, at 83% of the responses. Another 14% of growers were going to rent out less than 300 acres, while 2% planned to rent 300-499 acres. 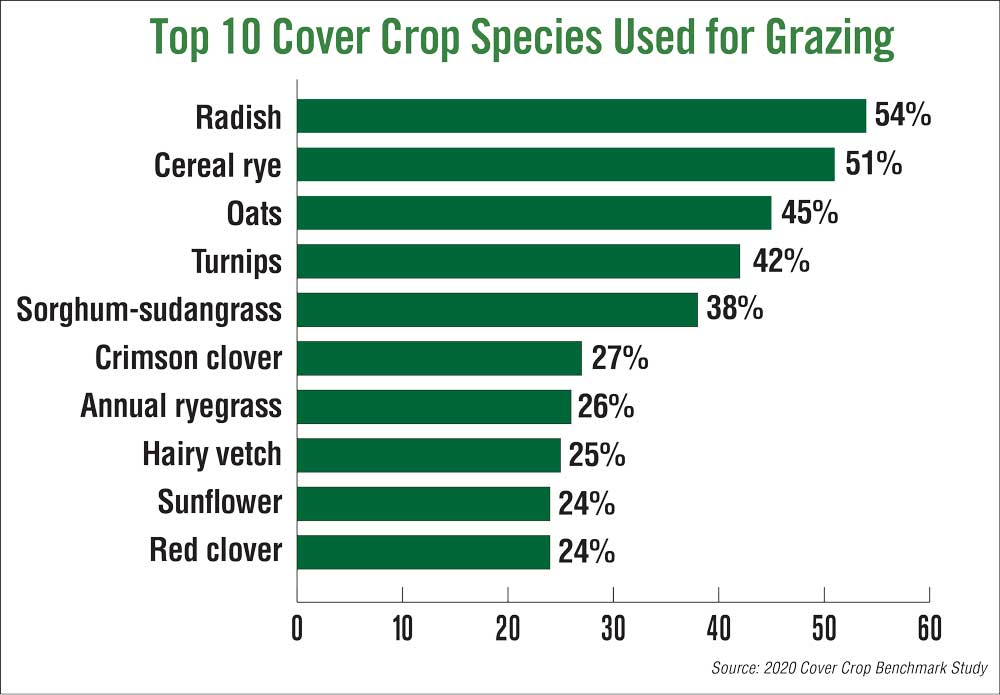 By far, beef cattle were the livestock of choice for grazing, with 87% of survey respondents saying that was the type of livestock they graze on their cover crops. Sheep were the next most popular choice, at 15%, and 8% of growers graze other livestock species, such as horses, pigs, chickens, wildlife and bison.

Rotational grazing is the most common type of grazing system used. Half of growers indicated they used rotational grazing, followed by open and/or unrestricted grazing at 40%. Another 28% of survey participants utilize mob/high density grazing on their cover crop acres.

Grant and Dawn Breitkreutz have utilized their cover crop acres for year-round grazing on their farm near Redwood Falls, Minn., for the past two decades. The Breitkreutzes graze 180 Red Angus cross cow/calf pairs and operate a 750-head custom cattle feeding operation, so they need a lot of feed. The couple has 27 paddocks of 4-5 acres and split their cattle herd into groups of 50 head per paddock. Nineteen watering stations provide hydration for the cattle.

“We’ve learned that when we bring our calves home from where they’re out grazing all summer long, we try to keep our calves still grazing something that’s very high in nutrition with the same water supply,” says Grant Breitkreutz. “We move the cows, instead of moving the manure with a manure spreader. When we first brought 58 cows home, we burned 400 gallons of diesel fuel hauling out manure. Now, we still may use diesel to haul feed to the cows, but we’re not hauling manure and we’re handling 4 times as many cows.”

Grazing cover crops is a long-term commitment for most growers, with 54% stating that they graze livestock for more than 90 days. Only 29% of survey participants chose 45-90 days, with 17% of growers indicating less than 45 days.

Since covers are typically grazed as a supplemental feed source, it makes sense that the top two seasons for grazing cover crops were fall, at 64%, and winter, at 54%. Forty-six percent of growers graze cover crops in the spring, compared with 38% who graze covers in the summer.

One-Third of Growers Use Cover Crops for Grazing, According to Annual Study

Growers Using Cover Crops Are Mostly New to the Practice