By mixing and matching cover crop varieties, Grant and Dawn Breitkreutz have boosted soil health and improved organic matter by up to 3 points in 10 years.

Pictured Above: BIG CHANGES. The Breitkreutzes configured their no-till drill to interseed cover crops into standing corn rows. Switching to a no-till system with 3 or 4 crops and incorporating intercropping was the biggest change they’ve made to their operation over the years.

Change is never easy. Sometimes, it can be just flat-out painful. Third-generation farmers Grant and Dawn Breitkreutz have been implementing big changes on their farm near Redwood Falls, Minn., for the past 2 decades.

During that time, the Breitkreutz family has converted a conventional corn and soybean and a cow/calf operation into a regenerative, multi-enterprise family business.

Change of this magnitude requires farmers to have a willingness to admit their way of farming might not have been the best way. It’s also challenging to embrace different farming methods after growing comfortable with conventional approaches for a long time.

Grant credits Dawn with being the driving force behind changing the way Stoney Creek Farm runs. “She’s always been the one questioning why we’re doing things a certain way,” he says, noting their daughter, Karlie, and son-in-law, Cody, also help with the farm. “Then I sit back and start to think about it. Let’s try 30 acres and see how it works.”

Grant admits they’ve made mistakes throughout the transition but been able to learn from many of them to improve the efficiency of their diverse operation.

“If you take the full synthetic production system and switch to a regenerative system all at once, it will be a complete failure for at least 4 years,” Grant says. “It was 5 years before we saw the soil start responding to what we were doing.”

Switching to a no-till system with 3 or 4 crops and incorporating intercropping was the biggest change they’ve made over the years, Grant says.

“People told us there’s no way you can plant green like that and get a successful corn crop,” says Grant. “We figured out how to do it, and it works great. Our biggest indicator of success is earthworms.

“We try to have at least 9 species in every mix. A lot are in there for a specific reason, such as breaking up compaction or gathering and holding nutrients for next year’s corn crop…”

Rather than planting by date, the Breitkreutz family waits until soil temperatures reach 55 F or warmer at a 2-inch depth. That’s usually May 5-10, which is still within their crop insurance parameters and lets them get maximum potential out of the crop.

“We’re not going to out-yield our neighbors, but we’re still above the county average,” Grant says.

The Breitkreutzes save their own non-patented soybean seed for the next year’s crop. The non-GMO crop is sold at a premium. “There are local processors consistently paying $1.20-a-bushel more for non-GMO over conventional soybeans,” Grant says.

“Fifteen years ago, our neighbors would stop and ask what we were doing,” Grant says. “We’d explain it to them and watch them keep doing what they’re doing. We do have many more neighbors who are experimenting with parts of what we’re doing.

In addition to changes with their tillage system, cover crops also play an important role at the farm. The Breitkreutz family seeds cereal rye, hairy vetch and clover to sequester nitrogen (N) and hold it in the soil for the corn until releasing it late in the season. 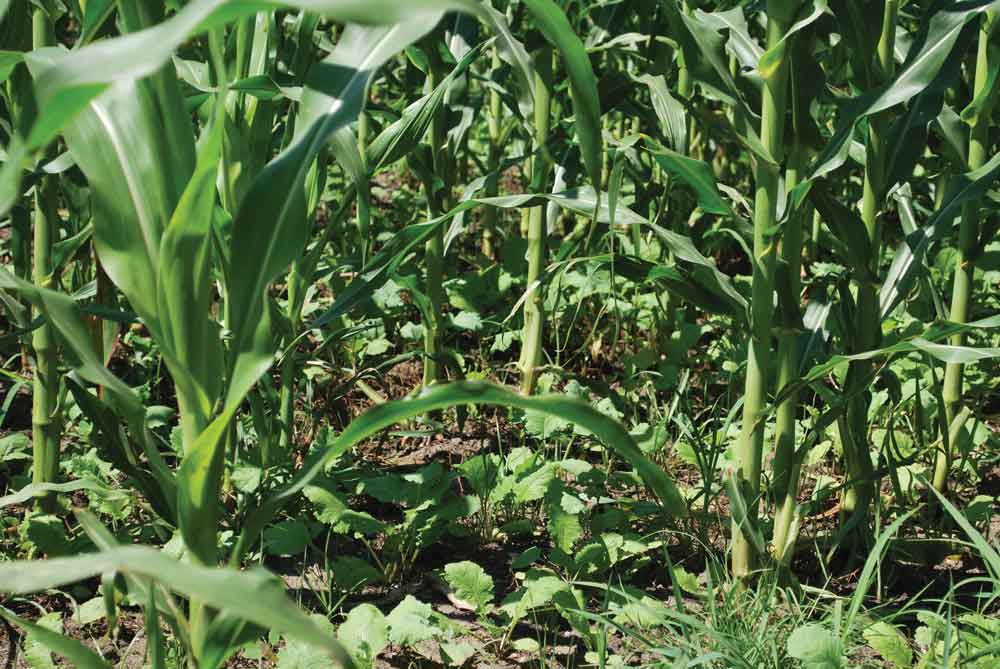 MIX IT UP. The Breitkreutz family prefers to use a cover crop mix of 3 grasses, 3 legumes and 3 forbs, such as annual ryegrass, cereal rye, triticale, oats, winter wheat, winter barley, turnips, radishes, kale, millet, clover, alfalfa, timothy, rape, Berseem clover and buckwheat. For fields where weaned calves will be turned out, they up the cover crop mix to 14-18 different species.

They mix their own cover crop seeds using their old feed mixer before putting it into a grain drill to seed. The family prefers to use a cover crop mix of 3 grasses, 3 legumes and 3 forbs.

“We try to have at least 9 species in every mix,” Grant adds. “A lot of the species we use are in there for a specific reason, such as breaking up compaction or gathering and holding nutrients for next year’s corn crop.”

Cover crops are terminated with herbicide. Having covers in the system has helped the family reduce herbicide application costs by half. But Dawn hopes to ultimately eliminate that application with another termination method.

“With our diverse cover crop mixes we plan to use a roller-crimper to create a mat on the soil surface so we don’t have to use herbicides.”

They harvest cereal rye grain as feed, bale the straw to use as bedding in the feedlot and plant that field with another cover crop that can be used for grazing later in the fall.

“We have some fields where we’ve documented a 1-point increase in organic matter in only 2 years,” he adds. “So we’re sequestering carbon and holding it in the soil. We’ve shown that we can increase organic matter in a short amount of time, but we’ve transformed the way we farm,” Grant says.

The Breitkreutzes also measure their success by the amount of water that can be infiltrated. Grant says that some of their fields can currently infiltrate between 8-12 inches of water per hour.

“Right across the fence on our neighbor’s land they’re at less than 1 inch of water per hour,” he adds. “That’s how we’ve changed the biology in the soil and what it’s doing. We’ve been dealing with massive amounts of water. We don’t count on snow for moisture.

“What we’ve learned is we can infiltrate that snow because our soils don’t freeze if we keep them covered with a successful cover crop.” 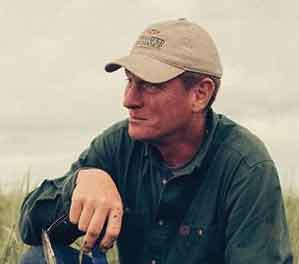 On our cropland, we’re at 1 million-plus earthworms per acre. In a cubic foot of soil we have 47 or more earthworms – Grant Breitkreutz

Wildlife also seem to be drawn to the Breitkreutz family’s covers. Grant shared a story about a field with 14 different cover crop species that was overtaken by birds for 3 weeks.

“We’d planted that cover crop after a forage crop, with the intention to use it for our weaned calves,” he says. “We think the birds were there for the insects. On a calm day, you could literally hear the buzzing from all the pollinators that were out there.”

Deer also seem to like   grazing on cover crops, too.

“The Minnesota River is a mile north of our farm,” says Grant. “We used to have 50-60 deer here in the winters. Twenty years ago, we’d be lucky if we saw three or four deer here. In 2019, we stockpiled a bunch of pastures on the north end of the farm to start calving our cows out on.

“We had 72 inches of snow in two months, and the deer were stuck and basically starving. When the snow finally started to melt and the deer could move, we had 280 head of deer show up and ate everything we’d stockpiled for our cows.”

In 2019, the Breitkreutzes harvested their cover crops as grain for feeding their livestock instead of terminating them and planting corn.

“It’s actually opened up the diversity of things we can do on our farm,” Grant says. “Our goal is to push until we can drill corn with no synthetic fertilizer, and we’re very close right now.”

A year-long intensive-grazing system keeps the cattle fed even during Minnesota’s tough winters. Grazing paddocks are 4-5 acres, and the herd is split into groups of about 50 per paddock. The farm has 19 watering stations spread across 27 paddocks.

“We’ve learned that when we bring our calves home from where they’re out grazing all summer long, we try to keep our calves still grazing something that’s very high in nutrition with the same water supply,” he says.

During winter grazing, the Breitkreutzes prefer to turn cows out on a former row crop field, which is usually corn stalk stubble.

“We move the cows, instead of moving the manure with a manure spreader,” Grant observes. “When we first brought 58 cows home, we burned 400 gallons of diesel fuel hauling out manure. Now, we still may use diesel to haul feed to the cows, but we’re not hauling manure and we’re handling 4 times as many cows.”

The family does not buy any extra feed for their cattle. If feed stocks begin to run low, they select animals from their herd to sell instead. Some calves are sold to other feedlots, as the Breitkreutz family does not have the facilities or time to finish them out.

Dawn notes that when fields lack diversity, the cattle require a larger number of acres to graze in order to meet their nutritional needs. Grant says that they utilize brix soil testing to help determine how many acres to provide for grazing.

“We know if we’re at an 8 or higher, we’re at a pretty high nutrition level,” he says. “It’s something I never thought I would use in school, and now we use it every day.”

Investing in an Organic No-Till Evolution to Increase Profitability

Canadian Growers Can Do Better with Cover Cropping