Adopting no-till, along with a diverse crop rotation and varied mix of covers, has allowed Chad and Danny Simmelink to grow their bred-heifer program.

Cows and cover crops are a winning combination for Kansas no-tillers Chad and Danny Simmelink.

No-tillers since 2003, the father-and-son team added cover crops to their rotation 3 years later and found covers not only build soil organic matter and reduce erosion, but make an excellent feed source for their bred-heifer program.

Danny Simmelink was a believer in minimum tillage well before the family started no-tilling. He and his father used a “v-blade” for several years, leaving crop residue on the soil surface while killing weeds below the surface. The Simmelinks moved further into no-till when better equipment became available.

“Originally, we wanted to save labor,” Chad recalls. “But we found that with no-till, we had potential for much better crop yields, too.”

Saving Residue. The Simmelinks farm about 2,500 acres in Jewell County, near the Nebraska border in north central Kansas. They receive about 25 inches of annual precipitation and their crop rotation includes wheat, cover crops and corn, or grain sorghum, soybeans and winter wheat.

In the 11 years they’ve no-tilled the farm has evolved from a rotation dominated by wheat to a system in which fall crops have become more lucrative.

The Simmelinks began using soybeans in the rotation in place of sunflowers in 2003. They had used stalks to support their bred-heifer program early in their no-till adoption, but cattle would eat too much residue.

“In 2005 we didn’t have enough crop residue on the soil surface, and it hurt our soybean yields,” Chad recalls.

They pull an air cart behind the planter to blow on 60 pounds of dry urea beside the row. About 1 gallon of 10-34-0 and a small amount of chelated zinc is applied into the row to give corn a pre-emergence boost. They aim for a population of 22,000 seeds per acre.

All winter wheat is planted to soybeans immediately after harvest, where nitrogen, phosphorous and zinc are applied in-row at planting.

After the crop emerges and is well established, the Simmelinks apply 80 pounds of 11-52-0, 65 pounds of AMS, 60 pounds of urea and 10 pounds of zinc sulfate with a dry-fertilizer floater truck.

When the wheat greens up in the spring, they apply about 150 pounds of urea. Chloride may be added, depending upon cost and the crop’s needs. Wheat may not need all these nutrients, but Chad believes they are feeding the next season’s crops with this treatment, too.

There are two cover-crop components to the Simmelink farm, both of which are planted into standing wheat stubble after wheat is harvested with a Shelbourne Reynolds stripper header.

The other mix, which features pearl millet, sorghum-sudangrass, oats, sunflowers, piper sudangrass and radishes, is planted after a flush of volunteer wheat comes on and is sprayed. The Simmelinks apply 11-52-0, sulfur and zinc sulfate for next year’s milo or corn crops with the floater, on top of the cover crop.

Chad aims for 40 bushels per acre with soybeans, 50 bushels for wheat and 125 for both grain sorghum and corn.

“We actually fertilize a little heavier than those yield goals on corn and sorghum,” Chad says. “But I don’t think we’ll lose any fertilizer in our system. And typically, our corn will yield a little better than that.”

The Simmelinks’ herbicide program is evolving to take a proactive approach against glyphosate-resistant weeds.

“We now use different modes of action. I don’t know that we have any herbicide-resistant weeds yet, but I’m worried about it,” Chad says.

Soybean ground receives a residual pre-plant application of Sonic, 2,4-D and glyphosate, and in-crop applications of glyphosate if necessary. On corn and grain sorghum, the burndown treatment is similar: atrazine, glyphosate and 2,4-D.

In corn, the post-emerge application includes Laudis, atrazine and glyphosate. They use Lumax as a pre-emerge herbicide in the grain sorghum.

A herbicide application in wheat usually isn’t necessary because crop rotation keeps most weeds at bay, Chad says. If needed, Harmony and LV6 are used for weed control.

The cover-crop portion of the Simmelinks’ operation has multiple purposes. 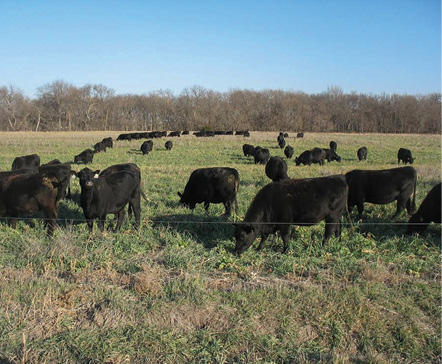 Foremost, it’s a source of feed for the bred-heifer program, and it also serves to keep cover on the soil surface and improve soil health by keeping soil biology active.

Bred heifers graze on a cover-crop mix of pearl millet, sorghum-sudangrass, oats, sunflowers, piper sudangrass and radishes. The covers were planted into wheat stubble in August, late enough after wheat harvest that the first flush of volunteer wheat could be killed.

About 90% of the cover crops are grazed each year, and the Simmelinks aim to leave about 50% residue cover on the ground. The cover-crop mix is constantly evaluated, and its performance depends on Mother Nature.

“In 2012, the mix included 3 pounds of sunflowers, which was about right,” Chad says. “Last year, 3 pounds was thick enough that it looked like we could harvest them. Everything we could control was the same, but weather was completely different.”

That the cover-crops are unpredictable represents a management challenge.

“We do have to graze them differently,” he admits. “Cattle performed differently last year than this year. But that unpredictability is only a problem in the human mind. The soil doesn’t care.”

For years, they have bought heifers from the same area of northwest Nebraska. The cattle are generally 8 to 12 months old when they receive them in the spring.

Upon receipt, they’re kept in drylots for a while, then turned out in cover-crop pasture if there’s enough residue — or held in drylot until May, when they move to native pasture.

In August or September, the heifers begin grazing on early-planted cover crops if available; the bulk of cover crop grazing occurs in November and December. The pregnant heifers are sold in December.

Each field of cover crops is strip-grazed, with paddocks ranging in size based on the amount of forage tonnage they will support.

The perimeter has an electric fence and each paddock within is separated by electric poly wire. The goal is to graze 35,000 pounds of beef per acre per day. Each day, cattle are rotated from one paddock to the next.

“It takes about 15 or 20 minutes to get the cattle to move. When the old fence comes down, the cattle are ready to move,” Chad says.

“Cover crops really put a shine on our bred heifers,” Danny adds. “You cannot drylot them year-round. They need exercise to get in good condition, and our buyers like them in good condition.”

Chad estimates the cover-crop grazing program is worth $2.50 per head per day, as opposed to feeding in the drylot.

There can be some health challenges from going from dry native grass to lush cover cops, however.

“It can be nerve-wracking,” Chad admits. “We feed the cows small square bales of alfalfa the last 2 weeks on native grass to get their rumens ready for covers.”

The heifers are also given minerals with an anti-bloat additive as an extra precaution while grazing the covers.

Adoption of no-till has saved labor and time, allowing the Simmelinks to devote more time to the bred heifer program.

Chad says they continue to explore new ways to push the system, such as planting perennial mixes on which the cattle can graze.

“If we want to conserve soil and take care of the land, I believe a perennial mix would be ideal. We’re looking at that more and more,” he explains.