Randy McElroy sees the tough soils sometimes from behind sunglasses, because when the ground dries out completely it can be a white as a sand beach in Florida.

These are the types of soils that McElroy, a technology development representative with Monsanto, has to contend with while conducting his cover crop research in southern Illinois.

Knowing these tougher soils are what cause no-tillers to lose the most sleep, McElroy shares some tips on using cover crops and other practices to improve those areas and increase crop yields.

McElroy’s research has focused on two farm sites — one located near Farina, Ill., and the Henry White Research Farm outside of Millstadt. The Farina farm involves 35 acres of plots, while the Henry White Farm offers 20 acres of land devoted to a variety of projects.

The Farina site features a Cisne/Hoyleton silt loam soil, while the Henry White Farm is predominantly Herrick silt loam. What they have in common is they’re poorly drained or surface-drained soils, McElroy notes.

McElroy characterizes his soils as tough for many reasons, such as containing less than 2% organic matter, having excessive surface drainage, inadequate internal drainage and lower cation exchange capacities (CECs).

The fields may have some varying slopes or may be flat. They may have a claypan or a fragipan, but their similarities include poor drainage and poor root establishment. They’re also drought prone, often starting wet in the spring and drying late, which means the soil can easily go directly into drought conditions.

“In southern Illinois we talk about always being one week away from a drought,” McElroy says. “We have a great deal of variability in our growing conditions, and I’m probably too comfortable with variability because we live with this all the time when we work our tough acres.”

In conversations with farmers about their challenging fields, McElroy says, they’re typically not talking about the whole farm, but rather 10-15%. Whether it’s highly erodible land (HEL), poor soil composition or some other reason, farmers are less concerned about their good ground.

The Henry White Farm was conventionally tilled until 2015, when it was converted to no-till. In its first year of no-till, McElroy seeded cereal rye, compared it to a check plot without rye and saw an 8-bushel advantage from soybeans following rye.

“So we picked up 4-5 bushels per acre and that’s the data from just 2 years of cover cropping,” McElroy explains.

When it comes to terminating annual ryegrass, McElroy says we kill it early and “graveyard dead,” using a high rate of Roundup WeatherMAX at 44 ounces per acre plus AMS.

“We also drive about 8 mph with the sprayer,” he says. “That’s one of the reasons I think, at times, our farm friends struggle to control annual ryegrass. When you drive 15-20 mph, it’s hard to get the coverage you need. So we spray it early, spray slow and use full-labeled rates of herbicides.”

Due to its long-term disposition as a no-till site since 1996, portions of the Farina farm have been used by McElroy to compare production from three different tillage systems.

He leaves one plot in its traditional no-till state, the second represents what he calls a “fast start” or minimum-tillage system and the third is conventional tillage.

The conventional tillage is actually shallow tillage, according to McElroy, since it is performed by making multiple passes with an older, lightweight Oliver disc. The fast-start tillage is a one-time pass with the disc either in the fall, if there’s time after harvest, or in the spring before planting.

In identical trials running from 2011 to 2016, McElroy’s averages have shown that no-till field’s yields outperform the fast-start system, which also surpasses the conventional tillage. His 6-year assessments reveal conventional-tillage per-bushel yields in the low 40s, while no-till averages nearly 50 bushels. His fast-start tillage typically falls in between.

“This is very consistent data. In the tough acres with flatter soils, no-till wins,” he says. “Perhaps seedbed preparation is overrated.”

Because of the potential cover crops have to help improve the performance of tough soils, McElroy says no-tillers should consider trying corn and soybeans with earlier maturities.

By experimenting with earlier corn and beans, McElroy tries to combine a higher-yield-producing seed with the tougher soil and climate conditions present in southern Illinois. A harvest date of early to mid-September then translates into more choices in drilling and establishing cover crops.

If he aims for the week of Sept. 16, to seed cover crops ahead of spring corn, he has a choice of using annual ryegrass, hairy vetch, oats, radish and crimson clover. But if he waits to plant covers until the first week of November, his choice is essentially narrowed down to cereal rye.

“It is more important to figure out an early soybean to plant, get harvested and then plant a suitable cover crop mix for my spring corn,” he says. “Corn is the crop I need to work on the most on my tougher acres.”

McElroy’s relative maturity (RM) for soybeans in his area is 3.7 to 4.4. He’s used soybeans with RMs as early as a 2.0 to 2.9 in order to identify genetics that work for early soybeans in southern Illinois.

“We were breaking 45 bushels on early soybeans planted in June at Farina, but when I did a two-site average, I got a really interesting result. There was a very clean break between RM 2.5 and 2.6 soybeans — just like that, a 10-bushel push at 2.6,” McElroy explains.

On the Henry White Farm, for example, McElroy had a 23-bushel variance in yields between RM 2.6 to 3.9 soybeans. He says the higher-yielding, later RM soybeans is a notable difference in plant genetics.

“When you think about selecting early genetics, we simply just can’t pick up a seed resource guide, study the characteristics we want, pick that bean and life is good. And we can’t call our friends in Wisconsin and say, ‘Hey, what should I plant in southern Illinois?’ It’s not quite that simple,” he says.

Even after identifying early corn and soybean maturities that can work, expect year-to-year variations in yields, McElroy says as those fluctuations can increase as growers move toward earlier genetics.

“If you’re going to use early soybeans to try to open up the window for cover crops, plant early for the geography that you’re in and select superior genetics, McElroy says. “Move your relative maturity a half RM to ¾ of an RM earlier, which should be enough of a shift to get you to harvesting soybeans somewhere between September 4 and Sept. 10.” 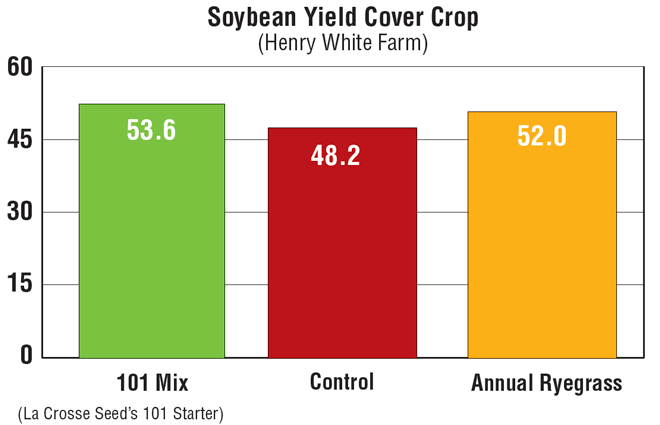 COVERS WORK PART 1. Data from the 2016 harvest at Henry White Farm demonstrates the use of cover crops improves soybean yields by over 5 bushels per acre in tougher soils. 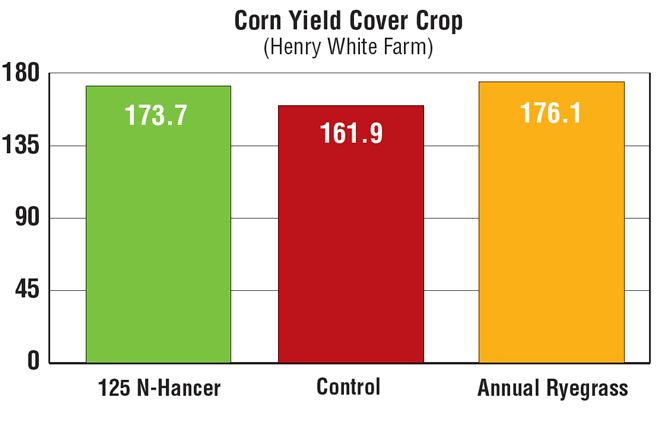 Again, using southern Illinois as an example, he says that range is about RM 2.7 to 3.5, noting the large range is due to Illinois being a long state north to south. “If I’m in Metropolis, near Kentucky, I can use a 3.3 or a 3.5 planted in April, harvest those soybeans in early September and get my cover crop mix in for my next season corn.

“But if I’m up near Effingham, I’m probably going to need to be earlier than that to get the job done,” he says.

At the Henry White Farm, he has the ability to gather results from plots that have only recently gone no-till. His control is straight no-till, one plot features a La Crosse Seed 125 N-Hancer five-way mix and the third section uses just annual ryegrass.

When it comes to conversations about early RM corn hybrids for fields going into soybeans, McElroy is less enthusiastic about bringing early corn into the system in order to get early cover crop mixes started for soybeans.

“But if you do move 5-7 days earlier in RM — again we’re only going after 10-15% of the acres that are the toughest — that can be early enough planting to get the corn harvesting done for next year’s cover crops to get established,” he says.

The no-till operation at Farina had to be discontinued early this year due to changes in Monsanto’s research work, so McElroy began establishing new research work in the Waltonville, Ill., area.

“We’ve decided to go with geospatial harvesting and the Farina site was not large enough for that type of harvesting,” he says. “We will be using cover crop mixes, as well as individual species on Henry White farm and our new acres in Waltonville.”

At the Henry White Farm, McElroy has been researching a cereal rye and radish mix, but for the most part he’s been looking at individual cover crop species and their potential to impact soil structure over time. These include cereal rye, annual rye, crimson clover and hairy vetch.

“As I look at my data across many years, we have demonstrated that no-till can out-yield conventional tillage over the long term. More than likely my research going forward is going to focus on yield results for early-genetic seeds,” he says.

The other research component will compare straight no-till vs. no-till plus cover crops. That will also open the door to examining the differences in planting cover-crop mixes versus single species. He’s starting with both corn and soybeans at the same time.

“The field we’re entering has always had some form of conservation tillage, but with no-till we’ll be starting from square one,” he says.

For the fall of 2017 going into the spring of 2018, his Waltonville research efforts for cover crops will be conducted on 15 of the 50 acres available that are subdivided equally between corn and soybeans.

“We’ve actually prepared these plots earlier in this spring by no-tilling different sets of early genetics corn and soybeans. This was to help facilitate an earlier harvest,” McElroy says.

“We’re coming through a very significant dry period so we’ll also learn how these early genetics handle what’s been to a certain extent a cool drought.”

Mark McNeely is the former managing editor of No-Till Farmer and Conservation Tillage Guide magazines. His previous experience includes 25 years in industrial engine journalism and marketing. Mark holds an M.A. in journalism from the University of Wisconsin.