Cover crops can have several potential benefits for soil quality in a no-till rotation.

But there is surprisingly little scientific documentation of these effects. Because changes in soil properties tend to happen very gradually, data from long-term cover crop experiments can provide insights into the potential of cover crops for improving soil functions.

The experiment was initially established in 1995 with hairy vetch as a winter cover crop following winter wheat in a wheat/grain sorghum rotation compared to the same rotation without a cover crop. Management involved reduced-tillage and four levels of N fertilizer at 0, 30, 60, and 90 lb/acre. This system was tested through 2000.

Starting in 2002, sunn hemp and late-maturing soybean as summer cover crops replaced hairy vetch, with all phases of the experiment managed exclusively under no-till. Other treatments (N rates and the no-cover-crop check) were kept the same. Sunn hemp and late-maturing soybean were planted after wheat in early summer, terminated in September or October, and grain sorghum was planted in June of the following year.

In 6 site-years during the period 2002 through 2008, soybean and sunn hemp produced dry matter yields of 2.42 and 3.43 ton/acre with total N contents of 111 and 134 lb/acre, respectively. Overall, both cover crops had a positive impact on grain sorghum yield, particularly at N rates of 60 lb/acre or less.

Positive residual effects of soybean and sunn hemp cover crops on the yield of wheat after sorghum were small and mostly observed at N rates of 60 lb/acre or less. Five-year mean wheat yields combined from the two sites and averaged over N rate indicated increases of 2.2 and 2.9 bu/acre in rotations with soybean and sunn hemp vs. no cover crop.

Figure 2. Effects of cover crops on soil organic C concentration at two soil depths. Bars with the same letter within the same depth are not significantly different. 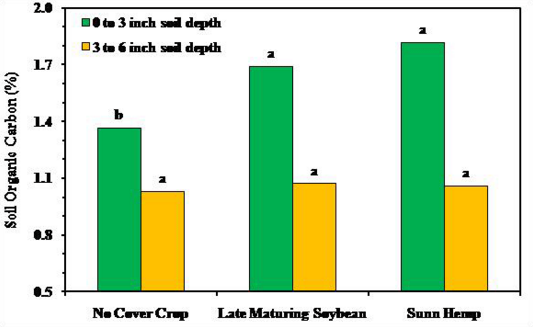 Figure 3. Wet aggregate stability expressed as mean weight diameter of aggregates (A) and relationship between aggregate stability and cover crop-induced increase in soil organic C concentration (B). Bars with the same letter within the same depth are not significantly different. 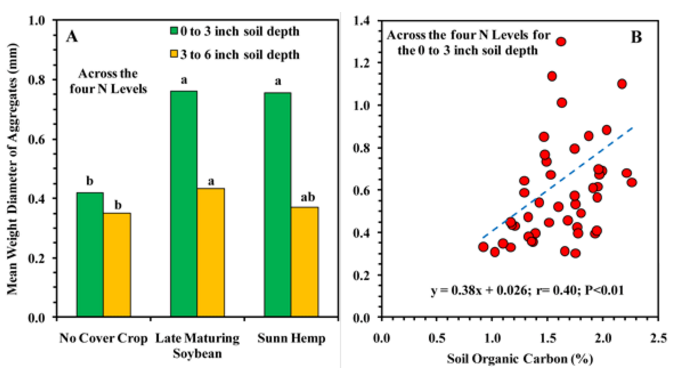 Figure 4. Cumulative water infiltration for the three cover crop treatments. Means with the same letter are not significantly different. 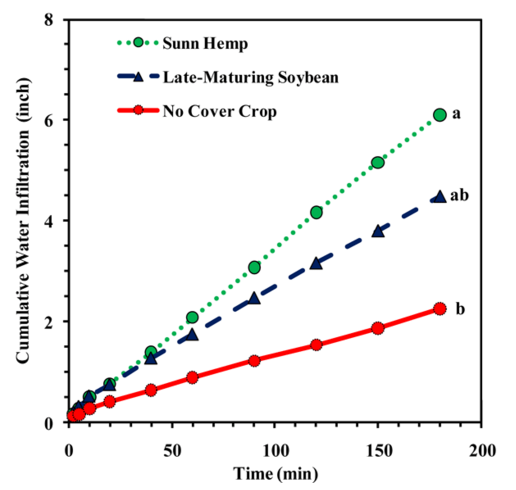 Averaged across all N rates, sunn hemp led to higher total earthworm numbers, followed by soybeans and no cover. A separate article in this issue of the Agronomy eUpdate (No. 542) addresses this in detail. The eUpdates are available at: https://webapp.agron.ksu.edu/agr_social/eu.throck

Thus, the greater benefits of sunn hemp than late-maturing soybean for increasing water infiltration may be due to the greater residue input with sunn hemp. Both cover crops, however, had significant benefits on reducing soil compactability, improving aggregate stability, and increasing soil organic C concentration.

Nitrogen application did not affect aggregate stability, but it did help reduce soil compactability and increase organic C concentration in the 0 to 3 inch depth.

At 30, 60, and 90 lb/acre of N, however, aggregate stability was not significantly correlated with organic C concentration. This suggests that the increase in organic C concentration from the use of cover crops possibly diminished, to some degree, with N fertilization. The same is true for cash crop yields; the benefits of cover crops decrease as N fertilization rate decreased.

Transitioning to No-Till, Cover Crops in the ‘Dust Bowl’
Learn how Nick Vos pushes to overcome moisture challenges on his farm in southwestern Kansas by no-tilling and using covers to recycle available nutrients and keep his sandy soils protected.