Ronnie and Dwight Forrester are improving nutrient efficiency and soil health on their Virginia farm with variable-rate fertilizer applications and diverse cover-crop mixes.

Pictured Above: BUILDING UP. Dwight Forrester (front) and his father, Ronnie, no-till 1,200 acres of corn, soybeans and wheat in eastern Virginia and are building up their operation with precision fertilizer applications and multispecies cover-crop mixes that include cereal rye, radish, rapeseed, Austrian winter peas and crimson clover.

Cover crops aren’t exactly a new thing at Holyoke Farms, but they’ve taken on a renewed importance for long-time no-tiller Ronnie Forrester and his son, Dwight.

With the threat of environmental regulation seemingly always looming in the Chesapeake Bay watershed, the Forresters are taking care of business on their operation by seeding cover crops behind corn and soybeans to improve soil health and reduce erosion.

Dwight — a soil conservationist for the NRCS office in Tappahannock, Va. — and his father raise about 60 head of Angus cattle and no-till approximately 1,200 acres of corn, full-season soybeans and double-cropped soybeans and spring wheat near Kilmarnock in eastern Virginia.

Due to weather issues and prices, they’ve been scaling back on small grains and shifting to full-season soybeans in the spring behind cover crops.

“I want to try to improve my soils and saw it as a perfect opportunity to put more money into the crops and go to corn and soybeans and do multispecies cover crops,” Dwight says, also noting that eliminating erosion is an important goal in regards to farming in the Chesapeake Bay area.

This year, the Forresters raised 650 acres of corn, 300 acres of full-season soybeans and 250 acres of spring wheat that was double-cropped with soybeans.

Farming in fine sandy loam soils, they plant corn the first week of April, soybeans in early to mid-May, and wheat in mid-October, seeking to double-crop soybeans into wheat or barley by July 4.

Currently, management at Holyoke Farm is a partnership, as Dwight works to gain experience farming 250 acres on his own, while he and Ronnie co-manage the remaining acres and share equipment.

Ronnie started no-tilling soybeans in the 1960s and added corn about a decade later. He says no-till adoption has been a farmer-led movement in the Northern Neck region of Virginia, but growers are still learning more about soil health.

“We would still disc up a field way back then, but we didn’t understand a lot about no-till,” Ronnie recalls. “We never heard anyone talk about biomass or organic matter until 5 years ago. Nobody taught us that. Now I’m kind of interested in it.”

Ronnie has been seeding cover crops in some form for about 40 years, but he and Dwight have branched out to seeding multispecies covers the last 5 years.

They seeded covers on 650 acres last fall and believe the additional biomass has already improved corn stands and increased the presence of earthworms.

Their main goals for covers are to improve water-holding capacity and take up excess nutrients to help their sandy Sassafras soils cycle them better. 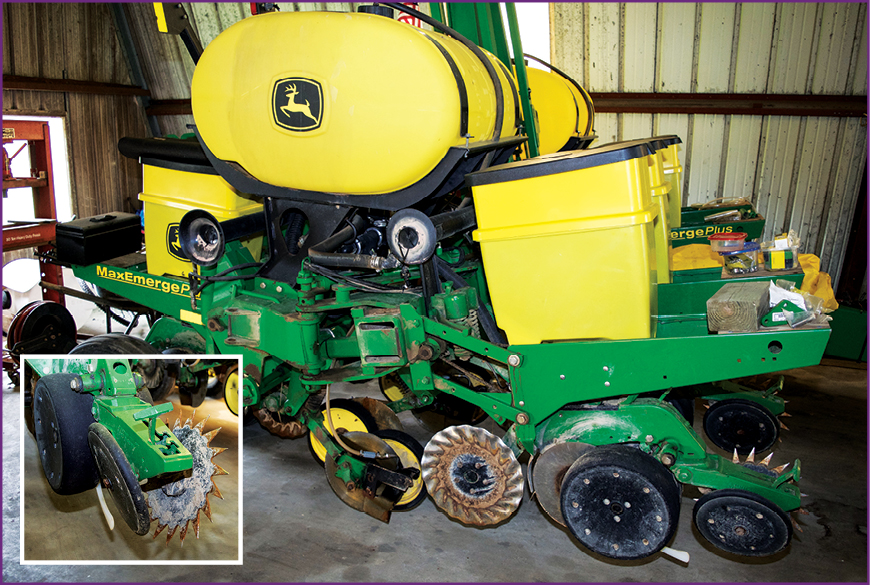 GOOD RESULTS. The Forresters use a John Deere 1790 planter, outfitted with one Shoup Mfg. spiked and one rubber closing wheel and Keeton seed firmers, to no-till corn into their fine sandy loam soils. They find this setup has done the best job so far in reducing sidewall compaction.

Getting cover crops seeded behind corn and soybeans is a challenge, as they aren’t always sure if they will get a mild or colder winter. The majority of soybeans planted in their region are 4.6, with a few 3.8 or 3.2. They typically plant 102-day to 112-day corn hybrids.

In harvested soybean fields going to corn, they broadcast cereal rye, Austrian winter peas and rape, and lightly incorporate the seed with a 30-foot Phillips rotary harrow, which fluffs up the soil to improve seed-to-soil contact.

“We’ve had excellent cover crop stands using that,” Dwight says. “In the fall we’re rushed trying to get our crops harvested and plant small grains, so by broadcasting and running the Turbo-Chopper, or harrow, we can get the cover-crop seeding done pretty quickly.”

While no-till is a foundation for their farm, cover crops are giving soils a healthy boost. In the last 3-5 years, they’ve seen organic matter levels in most fields increase from 0.5-1% to 2-2.5%.

Dwight mentions one 15-acre field along the Rappahannock River where he avoids seeding soybeans or wheat due to goose and deer predation, but has been planting continuous corn and seeding cover crops to break up pest cycles. He’s seen organic matter increase to 3.2% on that farm in the last several years.

“A 3- to 4-inch rain isn’t going to hurt us as much,” with no-till and covers, Ronnie says, and improved soil tilth has helped them plant sooner in wet conditions.

“There have been days where other farmers are calling me while I was planting soybeans and they were asking how I’m getting them in, and I tell them I’m not having any problem getting them in,” Dwight adds.

For many years the Forresters have been grazing their Angus cows on rye cover crops in a field where they’re raising continuous silage corn.

The Forresters used to rip and either chisel plow or disc that field twice every year due to compaction issues caused by heavy harvesting equipment, but now they only occasionally rip or do vertical tillage in the field and let a mix of cereal rye, radish and clover break up compaction.

Calves graze the cover-crop mix through most of the winter and are taken off in early spring ahead of corn planting.

Residue issues are causing a few problems for the Forresters, mostly corn stalks beating up their drill.

They’ve started using the Turbo-Chopper in the fall to break down stalks, keeping the machine level and running it shallow to avoid disturbing too much soil.

“We like it just riding on top of the soil with enough pressure to chop the stalks up,” Dwight says. 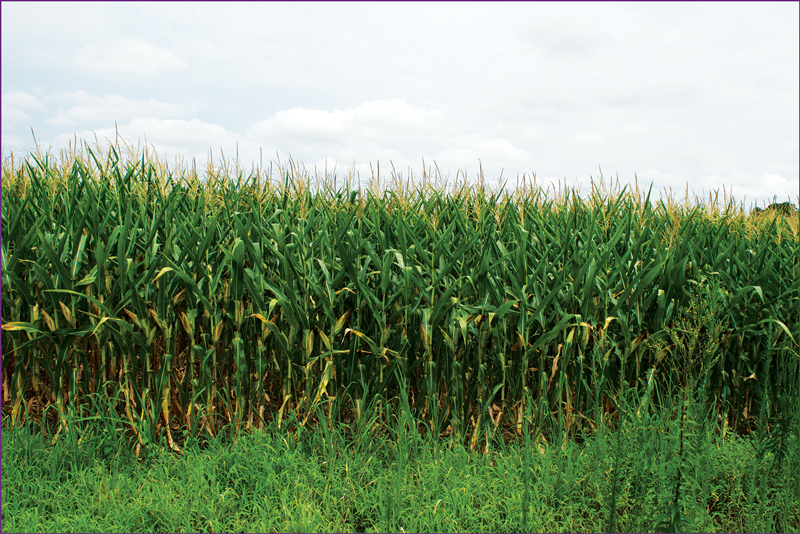 SPLITTING UP. Nitrogen applications for corn at Holyoke Farms are split into a starter of either 24-0-0-3 or 11-37-0, depending on the field, along with chelated zinc, and one or two sidedressing passes with 28-0-0-5 at 18 inches and dry urea over the top before tassel.

The machine has no row cleaners, but includes one Shoup Mfg. spiked and one cast-iron closing wheel, along with Keeton seed firmers. Dwight says this setup ensures good seed-to-soil contact and helps avoid sidewall compaction when closing the seed trench.

They also have Precision Planting meters on all rows, a John Deere 2630 monitor and IntelligAg controller chosen because it interfaces with the Deere monitor. “The IntelliAg monitoring system helps me ensure each row was at the target population,” Dwight says.

Their goal is to move to variable-rate seeding of corn in the next 2 years, but the Forresters are already using variable-rate prescriptions to apply dry fertilizers like ammonium sulfate and potash, as well as lime, based off of yield and soil-type maps.

This year they’ve relied more heavily on tissue samples to determine nutrient needs for in-season corn, sidedressing 50 pounds of 28-0-0-5 when corn reached about 18 inches tall, followed with another sidedress application of 60 pounds of dry urea over the top before tassel.

They were experimenting with the treatment last summer but left check strips this year to calculate any difference in yield at harvest.

“Last year, even though we didn’t have a check strip, it looked to me like the vigor of the plants was healthier,” with the additional sidedressing, Dwight says.

“We were getting a lot of rainfall at that time last year — the storms seem like they’re becoming more and more intense — and I wanted to limit my risk of N loss and give the plant an opportunity to take up N over a long period of time.”

The Forresters’ 5-year yield average for corn is 149 bushels per acre, which includes data from the 2012 drought year.

But Ronnie and Dwight have seen corn yields improve overall with 130 bushels an acre harvested in 2008 and 179 bushels last year.

Dwight attributes this increased production to reducing tillage and adding cover crops to the rotation — which is increasing water infiltration rates and organic matter — as well as improved fertility and pest management programs and adding precision equipment to the planter.

“This spring I planted through some of the heaviest cover crops I have ever planted through and, to be honest, I was a little worried about the stand,” Dwight says. “But it worked out well.”

Protecting Soils with No-Till in a Colder Northern Climate

A Win-Win for Cover Crops in the Chesapeake Bay