Protecting Soils with No-Till in a Colder Northern Climate

Jerry Morical is showing no-till practices can work in a frigid region of the U.S. as he interseeds cover crops into corn and reaps the benefits of mellower soils.

For decades, Jerry Morical has made a living raising crops in the hilly, sandy loam soils near Garfield in western Minnesota. But his small farm also lies within a recreational haven, surrounded by the Chippewa River watershed and dozens of small lakes.

Five years ago, he decided it was time to do more to protect his farm’s soils and the local watershed and made a rapid conversion to no-till.

“You’ve got tile lines or you have runoff and it’s going to get into the lakes and go to the watershed. That’s probably one of the biggest reasons we went to no-till,” Jerry says. “It has virtually eliminated the washing. You hate to see soil go down the hill because it never gets back up there again.”

Jerry raises corn, soybeans, wheat and some alfalfa for hay on his 850-acre farm between Fargo, N.D., and Minneapolis, and he raised a small number of hogs until the mid-1990s.

The farm started out as a conventionally tilled operation with chisel plowing and field cultivating. But when Jerry’s grandson, Taylor, returned to the farm 5 years ago he suggested looking at no-till practices.

Although some farmers in their area are very skeptical of no-till, Jerry didn’t feel that way after doing some reading about the potential for reduced fuel use, improved soil health and more stable yields.

“I guess I’m always eager to try something new, so it didn’t bother me to try going into it. And it gives the neighbors something to talk about,” he says. 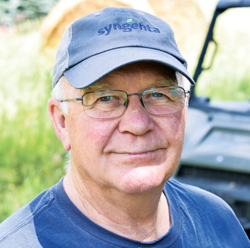 Shortly after deciding to no-till, Jerry scouted a field just east of his house that didn’t have much residue left after he raised navy beans. He chose not to till it after harvest and was surprised at what he saw the following spring.

“There were so many earthworm mounds out there that I figured I’m not going to disturb all those earthworm houses,” he says. “That was probably a couple years before we went into full-time no-till.”

One of their first tasks was buying equipment that would help them no-till successfully. They bought a 12-row John Deere 1770 MaxEmerge planter and added components so they could apply both dry and liquid fertilizer, as well as row cleaners, closing wheels and airbag down pressure. They also bought a 15-foot Deere 750 no-till drill for planting wheat and cover crops, replacing the solid steel closing wheels with Exapta’s Thompson closing wheels.

The planter is currently outfitted with Yetter SharkTooth row cleaners. Farming in soils that aren’t particularly heavy or light, Jerry tried a mix of Yetter’s spading and spike closing wheels to see which worked best closing the seed trench and decided on the spike wheels.

For corn, the Moricals typically apply both dry and liquid nitrogen (N), phosphorus (P) and potassium (K) in-furrow and in a 2-by-2-inch application, then follow that with broadcast urea around V6 and sidedress 28% N when plants are about 20 inches tall.

The Moricals are also adding cover crops to their system, drilling in different combinations of radish, turnip, cereal rye and annual ryegrass behind wheat or using a homemade machine to interseed covers into corn in mid-June.

To build the interseeder, Jerry used insecticide boxes off a White corn planter and fluted cups from a John Deere drill, and mounted the equipment to the back of his sidedressing machine. He then added fertilizer tubes and drop tubes so he could sidedress 28% N and interseed covers into corn in one trip.

Drag chains are also part of the setup, and seed is deposited into a trench about 6-8 inches wide.

“It’s not the world’s best, but it works,” Jerry says. “Originally, when we had it as a 3-point machine, the seed just dropped onto the soil. With the sidedress machine and the wavy coulters, the seed drops down and gets in where the coulter is and the coulter mixes it into the soil.

NO WASHING. Farming hilly terrain in western Minnesota, Jerry Morical switched to no-till practices 5 years ago to eliminate soils from washing and improve the health of his sandy loam soils. He’s already seen soil organic matter levels increase as much as half a percentage point to 4.2% in one field.

“The seed hoppers are a little small, so you must fill relatively often. And it’s a little hard to meter the proper amount of cover crop seed because you have a sliding feeding mechanism and it’s driven hydraulically. It’s not an exact science on how fast meters are turning and each cover crop has different seed sizes.”

After watching the results Taylor was getting by mixing cover crops with dry fertilizer and broadcasting them with a spinner spreader into corn about 18 inches tall, Jerry is going to try that on some of his corn this year. The mix of fertilizer and cover crop seed will require some adjustments.

“We usually use annual ryegrass as the main component on our cover crop for corn, and it’s a light seed and doesn’t fly out as far as the fertilizer,” Jerry notes. “If we cut the 50-foot pattern down to every 25 feet, and cut the rate from 200 pounds an acre to 100 pounds, the ryegrass should cover pretty evenly. I think Taylor did go for 50 feet and the stand was pretty thick in some spots and nothing in some spots.”

Jerry typically has seen annual ryegrass winterkill in his area in spring, but last year there was enough snow cover to protect it and it overwintered. He terminated it with glyphosate and didn’t have any issues with killing it that other no-tillers have sometimes reported.

After 5 years of no-tilling, Jerry says he’s seeing changes in his farm’s soils, as they’re getting more mellow. Some soils tests last summer showed organic matter levels in the field improved to 4.2%, up half a percentage point from the last test, and water-holding capacity is getting better.

“You can dig up a plant and the dirt will just fall off the roots rather than being cakey on there. I’ve really noticed that this year,” he said last July. “I’m sure this will come with time, but as far as that mellow soil releasing more nutrients, I don’t know if that’s happening yet.

Jerry says he hasn’t witnessed any yield drag in adopting no-till and he’s been on par with neighbors, which conflicted with what he’s read.

“The first year we no-tilled it was a wetter spring and that was more of a hassle because we try to plant when everybody else does. But this year was really good, because it was a little drier.”

He estimates he’s getting pretty close to the county yield average for corn, but yields averaged 185 bushels on his farm last year and one field didn’t fall below 220 bushels.

Although no-till has been a success so far on Jerry’s farm, he’s still working through challenges with changes to his soils, increased residue that he must plant through and fickle weather.

HANDLING RESIDUE. Jerry Morical turned to a John Deere 1770 MaxEmerge planter as he adopted no-till practices on his 850-acre farm 5 years ago. Yetter SharkTooth row cleaners and Yetter spiked closing wheels help him no-till corn and soybeans through residue from his cash crops and cover crops.

He says the Yetter row cleaners on his planter are handling residue challenges well overall, but planter attachments are something he continually evaluates with wheat, corn stubble and cover-crop residue in his fields.

In a cooler northern climate with a shorter growing season, he’s concerned about getting seedlings off to a good start and wants to find the right balance between safeguarding residue and soils and creating a proper environment for seedling emergence.

“In one field this year we had a lot of wheat stubble and also cereal rye and radishes, just a lot of stuff on top of the soil — so much so that the sun couldn’t get down to the seed trench and warm it up to get going,” he says. “I think we had more trouble this year with the soybeans not taking off without having black soil opened up for that seed.”

Last spring, on farm ground that was tiled and happened to have more black soil, Jerry found soybeans were 1 foot taller than plants planted in heavy residue that were lacking sunlight.

“It was the same thing where I made one pass with a vertical-tillage machine. It made enough of an improvement that you could stand back and see soybean plants in that area were taller and greener,” he says. “And we had soil and tissue tests taken in those areas and they’re virtually the same, so it’s just that the other plants didn’t get rolling.”

Morical wants to address this emergence issue. He isn’t planning to pursue vertical tillage any more, as he feels it disturbs the earthworms’ habitat. But he had a neighbor build strips on a few acres on his farm last fall so he can try strip-tilled soybeans, “and see if there’s a yield advantage for strip-till vs. no-till.”