The Environmental Working Group used satellite imagery to compare cover crop acreage and found an increase in Iowa, Indiana and Illinois from 2015-2017.

The sustainable farming practice of cover cropping grew in Iowa in 2018, but is still far below the goal called for in Iowa's Nutrient Reduction Strategy.

Cover crops are planted in the off-season to help protect soil from water and wind erosion and reduce nutrient runoff into waterways.

Using satellite imagery, the Environmental Working Group compared cover-crop acreage in Iowa, Indiana and Illinois from 2015-2017, and found a net increase in all three states. Iowa's acreage grew about 16% last year. Report author Soren Rundquist said it's a step in the right direction, but far from what is needed. 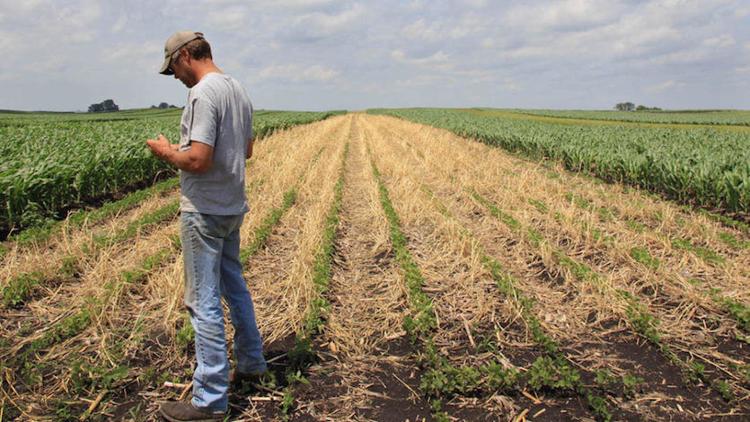 "We welcome this growth of this practice, intended to reduce agricultural runoff polluting surface waters," Rundquist said. "But the scale to which this practice needs to exist to make substantial change is still kind of a drop in the bucket, more or less."

Iowa has seen a 19% cumulative decline in new cover-crop acres since 2015.

For farmers, cover crops have their challenges, including costs to implement the practice and the possibility of lost yields. Rundquist said cost sharing and crop incentives can help offset those costs. And, he added, farmers already using cover crops understand they're a long-term investment.

"The adoption of this practice is kind of contingent on farmers talking to each other, and more or less hearing it from other producers, seeing the gains and benefits of utilizing this practice on their own," he said.

Since 2015, satellite photos showed cover crops in Iowa increased from 592,000 acres to 907,000 acres. But that's well below the goal of 12.5 million acres called for in the Nutrient Reduction Strategy.

Can I Plant a Cover Crop if I Used a Pre-Emergence Herbicide?