The moment that convinced Max Martin to park his plow and switch to no-till came as he witnessed the fate of precious May rainfall on his farm after enduring years of drought.

“I stood in my rubber boots in one of our standing dirty ditches on the ranch, watching all that water leave the ranch and going to the next ranch. And at that point in time I said, ‘You know, this isn’t fun,’” Martin told attendees at the Southern Soil Health Conference in January.

“We had to change the way we think about water. We had to sell cattle during the drought because, quite frankly, we got tired of taking the tractor out and pulling dead cattle out of mud holes.” 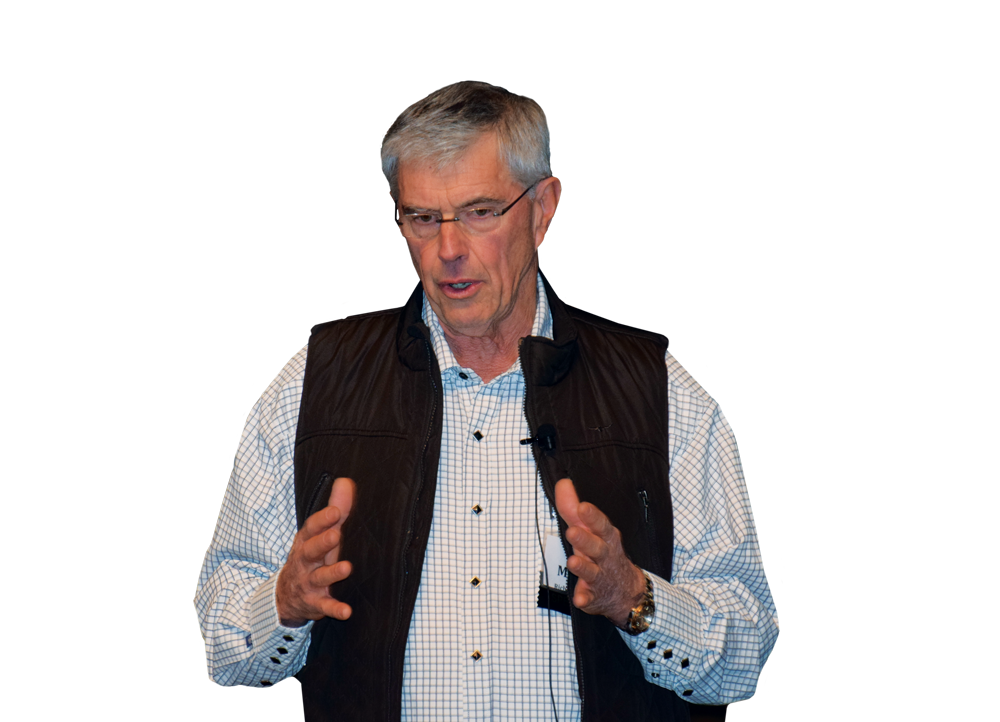 The CEO of a major computer programming company, Martin runs a 500-acre calf-stocker-feeder operation and raises 550 acres of wheat and cover crops, 100 acres of Bermuda and 12,000 acres of additional pasture near Loving in northern Texas.

While he’s mostly rotated wheat for the last 20 years, Martin has added radish and rape to the wheat, and he planned this fall to seed a rye/triticale mix and possibly some oats.

Martin has no-tilled and utilized cover crops for 3 years, which caused him to shift to fall and spring calving for the herd. He wants to improve forage optimization with cover crops while staying within the boundaries of his cost-of-gain guidelines for calves. He’s also worked closely with Green Cover Seeds and soils and crops consultant Jim Johnson at the Noble Foundation to choose appropriate species and integrate cover crops on the ranch.

The mixes he’s used have included legumes (cowpeas, soybeans, sunnhemp and mung beans), grasses (BMR grazing corn and pearl, proso and brown-top millet), broadleaves (sunflower and buckwheat) and rape, radish and forage collards for brassicas. Martin applies about 4 pounds an acre of phosphorus (P) in furrow through his John Deere drill for wheat in the fall, and also uses it as a liquid inoculant for cover crops after wheat harvest.

“I like to keep the carbon-to-nitrogen ratio at 20:1 or 25:1 so I can determine what that composition rate is on the biomass,” he says.

Although Martin says he’s still working on understanding what species of cover crops work best for what tasks, cover crops have, so far, exceeded his expectations because he never thought they would be a major forage contributor. Martin has a love-hate relationship with sunn hemp — as he likes to decide in August or September on terminating it, depending on available soil moisture, but hasn’t had good luck terminating it with glyphosate.

Martin doesn’t believe he has a major weed problem, but he doesn’t like seeing them either and he wants cover crops to help his weed control program. He does worry about compaction issues in some fields, especially a few dozen acres where he didn’t get very good cover-crop germination in 2015.

“When you’re using GPS auto-steer and you’re out there sowing, it gets pretty boring because there’s nothing to do. So one of the things that I did is I start observing my weeds and where my weeds were located,” Martin says. “Guess what? I never saw a weed within 10-12 inches of a sunnhemp plant.

“And yet the weeds are growing right up in the middle of my millets. I had three kinds of millets and there were weeds all over the place in some of those millet plants. There’s something about that chemical microbial resistance factor on weeds with cover crops and I want to understand that better. I’ve got a couple of fields that were more weedy than others and I’m trying to research that and study on how to achieve a better solution.” 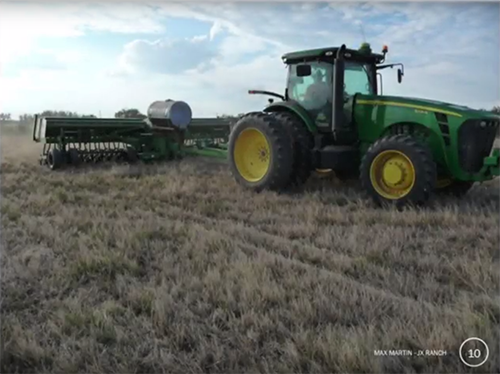 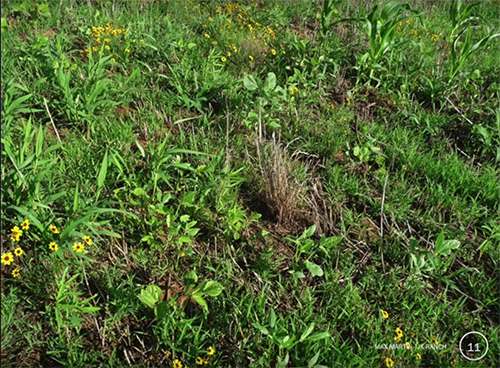 Loving, Texas, no-tiller and rancher Max Martin uses a John Deere drill to seed winter wheat in fall and multi-species cover crop mixes in May. He applies phosphorous in furrow both with wheat and with his cover crops as an inoculant. He’s not seen many problems with germination other than in one field.

What Business Are You In?

Martin says he and his farm managers operated in a false comfort zone for a long time and didn’t know much about soil biology.

“I really didn’t know what business I was in. Ten years ago, if you had said ‘What’s your business?’ I would have said we were in the cattle business and left it at that. Today, I’d say we’re an animal reproduction business, the range management business and the carcass creation and marketing business.

“What business are we in with no-till? I submit that we’re in the microbiology manufacturing business. And once I understood the science behind that, I felt like I began to know what business I was in — because if you don’t understand it, you can’t manage it. And we didn’t manage it back then because we didn’t know enough.

“I did understand the effect on soil disturbance on beneficial fungi in soils. My disc is now collecting rust in the shed.

“I’d like to find my first worm on the farm. I’ve owned it over 20 years and have never dug up one worm with a shovel. That shows you how good I was at destroying that soil.”

So far, Martin says he likes the returns he’s getting from his no-till/cover cropping system.

Martin has been measuring soil organic matter (SOM) levels in four fields on his ranch since 1999 and his data shows a decline of about 0.40% in SOM in the 14 years he was tilling, and 0.10% to 0.20% improvement in between 2014 and 2015 — although in one heavily grazed field he’s seeing organic matter dropping, soil pH increasing and poor cover crop germination.

For 2015, Martin estimated his seed, inoculant and diesel cost for seeding covers at $31 an acre for grazing cover crops on 550 acres.

Being a Market Maker

Martin is still figuring out how the biological manufacturing plant in the top few inches of soil affects metrics for his cattle such as body condition scores, as his goal is to have cows average a 5.5 and bulls a little higher than 6 on a 1-9 scale.

Martin says the primary objective of his ranch is producing a quality-yielding carcass that can sell on a “value-add, grid marketing-based price program,” which is done primarily through bull genetics. He’s completely restructured his calving program around forage and believes it’s had a positive impact.

“Our bulls are in the top 30% of the ICI database. We do have a small group of bulls that are in the top 4% that we’re studying to see if that makes sense to pay that much money for a bull,” he says.

He focuses on two key performance indicators in the livestock program: Cost of gain, which is analyzed across all weight sectors, and the expected return on carry to move a calf to the next weight class.

Martin likes to have a lot of options on where he can unload animals, whether it’s early in the season, post weaning, or taking them to a finish line. He likes to achieve 25% return on carry for calves but notes today’s market doesn’t let him do that.

Ideally, Martin moves calves to a finish pen and markets them through the U.S. Premium Beef Program out of Kansas City.

“If we have to sell that calf before its time because we can’t project our ROI on carrying that calf, we try to build enough carcass data so we can go to quality feedlots and still sell that calf as a premium,” he says. “Sometimes we’re doing that and sometimes we’re not doing it. Primarily, we still need more data.” 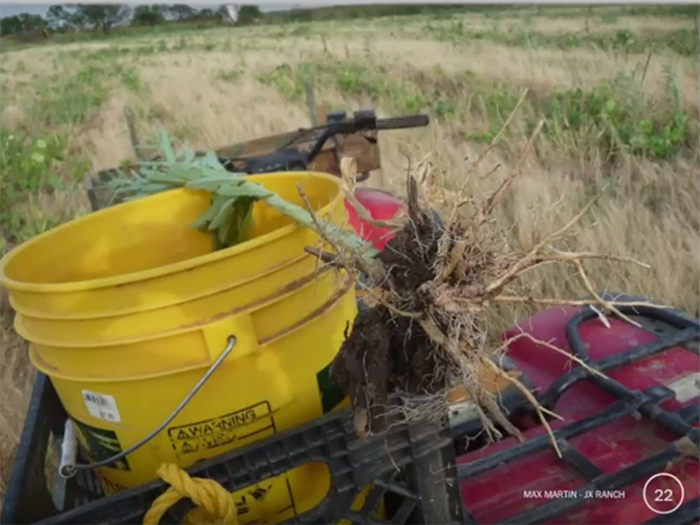 Max Martin says he likes the healthy root systems that sunnhemp provides and he’s seen examples of excellent weed control from the cover crop, but he’s had a hard time terminating it with glyphosate.

In the fall, Martin typically seeds wheat in October and places calves in pre-con pens for 30-45 days in the fall to see if the animals are “all straightened up from the medical point of view” and how the wheat crop is doing. “We’ll vary a little bit on maybe when we turn them out on wheat depending on moisture and the health of the calves,” he says. “Otherwise, we’ll start that wheat operation. And we’ll again watch the market, depending on what we want to do with those calves.

“We raise our own hay, so when Feb. 15 comes we’ve got to save off a little bit of that forage for our hay and take those cattle off. Otherwise, we’ll determine whether we want to put weight on them there.”

Martin says his cost of grain for forage is 0.40 cents per pound, and he comes out of the pre-con pen at a cost of 0.50 cents.

“I got to forage with a cost of gain of 0.40 cents. I go to Guymon, Okla., with a cost of 0.76 cents. So you can see how I can begin to play off various factors of where I want that calf to be from a weight point of view, whether I want to get off early on the train in this market.”

Martin will pick up the next bunch of calves in spring and place them in the pre-con pen, and seed multi-species cover crops in May if the weather permits it. “And of course, we’ll either follow the baler, or if we graze those cattle out, we’ll go in there right after graze-out and get that cover crop in,” he says. “That gives us 8 months of good forage there. If I can put weight on at 0.40 cents I’ll do that all day long.”

Additionally, Martin’s ranch measures every calf that comes out of the feedlot and uses DNA to tie it back to a bull to decide whether or not the bulls are paying for themselves. “What I’ve basically done is doubled my bull costs but I’ve gone to using them twice a year. Is that going to work for that better carcass? So far, it has.”

Earlier this year he noted 89% of one group of heifers rated Yield Grade 1 or 2. “So we’re succeeding and making the progress towards that quality goal, where we can try to become a little bit more of a market maker versus a market taker,” he says.