Some no-tillers say they don’t plant cover crops because there isn’t enough time, or they don’t want to add extra equipment passes in their fields.

But last fall, Vincennes, Ind., no-tiller Ray McCormick came up with a newfangled solution. He mounted a Gandy Orbit-Air applicator onto his combine and seeded annual ryegrass into freshly harvested cornfields.

For a project that was done on the fly, there were surprisingly few problems, says McCormick, whose experiment has sparked a new wave of interest. The setup shows high potential in some regions of Illinois, Indiana, Ohio and Missouri, where there’s a longer period of time after harvest for cover-crop stand establishment.

“When we pulled out of those fields, the cover crop was done,” McCormick says. “People say they don’t have time to put on cover crops, but if you do it with your combine, you don’t have to run your drill through those fields and chop up your tractor or gauge-wheel tires. It’s a one-pass operation.”

McCormick, who no-tills corn and soybeans in southwestern Indiana, says he’s heard other no-tillers toss around the idea of seeding covers during harvest. Last fall, he decided to actually do it.

He called up one company to get an air seeder to mount to his combine, but was told it would take 8 months to take delivery. He then called Gandy, which eventually sold him a used 6-bushel applicator that he could put together and use.

McCormick spent $80 to buy metal that he welded to the top rail of the corn head to support the applicator. After drilling two holes for bolts, he fastened the Gandy unit onto the rail and ran the air hoses underneath the corn head’s snapping rollers.

“We didn’t want the seed to go out the back of the combine. We wanted it blowing out under the rollers so the plant material comes out on top of the ryegrass,” he says.

McCormick hooked up the unit’s electrical drive so it turns on and off as the corn head is raised or lowered, and he configured the hydraulics so no hoses need to be plugged in when the header is attached or removed.

“It’s ready to go when you put the corn head on. I could have picked the unit up and moved to another head or grain platform if I needed to,” he says.

At a cost of $11.25 an acre, McCormick seeded hundreds of acres of Bounty annual ryegrass at a rate of 15 pounds per acre while picking corn, and a good stand of ryegrass emerged between the harvested rows.

Among the many problems he expected was the Gandy’s air intake getting clogged with debris, but it wasn’t an issue.

This fall, McCormick plans to use a prototype Gandy unit with a lower, wider profile, and he wants to branch out from seeding a monoculture cover. 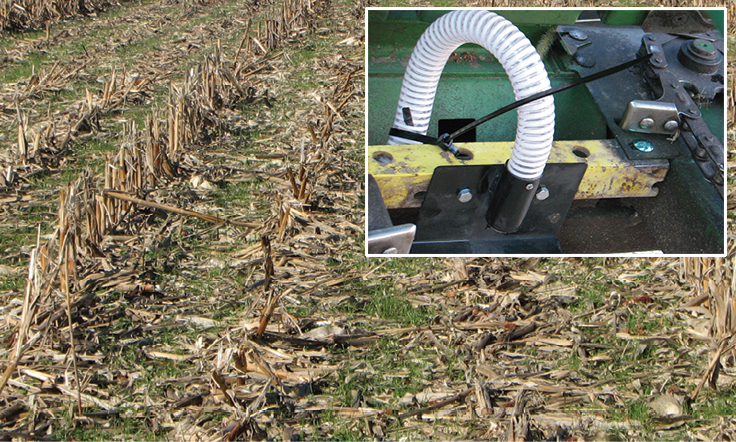 He’s found radishes do the best job grabbing existing nitrogen in the fall and sequestering it, while cereal rye and annual ryegrass are best for long-term nitrogen sequestration. Crimson clover wins out for its ability to produce nitrogen.

McCormick sees the ability of covers to hold or produce nitrogen critical as fertilizer prices continue to skyrocket. During last January’s National No-Tillage Conference, he told attendees that it would cost him $165,000 just to fertilize some of his fields with his standard fertilizer program, with no sidedress application factored in.

He remembers similar operations years ago costing him $50,000 to $80,000 — for the entire farm. His goal now is to use cover crops to generate about 100 pounds per acre of nitrogen each year.

Seeding covers with the combine will reduce field passes, fuel use and equipment wear and tear, possibly saving even more money.

“I want to go from 100% pulling a John Deere 1890 CCS air drill to nearly 100% putting covers on with the Gandy,” he says. “I’m saving all that effort of coming back over the field with the drill and tractor, and it also frees up my son during harvest.”

The company sells many custom-built units for no-tillers wanting to seed cover crops, but there’s never been demand for a seeder to work in tandem with a combine until McCormick called, says Gary Wolff, Gandy’s research and development manager.

Not long after McCormick showed pictures of his experiment at the National No-Tillage Conference and on the Internet, Gandy started getting phone calls from no-tillers interested in their technology, Wolff says.

The unit McCormick used last year is a small version of equipment Gandy has been selling for more than 20 years for applying granular chemicals, fertilizers or for seeding alfalfa, clover and soybeans.

“It’s a standard model, but a prototype in the manner he was using it,” he says.

Wolff says it’s a challenge to meet the needs of cutting-edge no-tillers looking to add cover crops to their rotations. A slow speed for a highboy rigged to seed covers might be 10 to 12 mph, and booms now reaching 120 feet wide have the company looking closely at the capacity of their larger applicators.

“The cover-crop thing is just such a hot item right now, everybody has their own ideas and ways of doing it,” he says. “I think this is just the tip of the iceberg.”