More Ideas for Seeding Covers, Harvesting Crops in One Pass

An idea hatched several years ago — to harvest cash crops and seed cover crops in a single pass — is spreading through the Corn Belt with new, innovative setups.

Pictured Above: RISING UP. Cereal rye emerges in a corn field harvested last fall by Rossville, Ind., no-tillers Hal and Ty Brown and seeded to cover crops with a Horsch Partner air seeder attached to the back of their Claas Lexion combine.

Ray McCormick’s idea to fasten a small air seeder on his combine to seed cover crops while harvesting cash crops is picking up steam across the Corn Belt.

Two no-tillers who adapted a similar one-pass system on their farms share how they did it.

The air seeder is fastened to the soybean header. The seeder was originally calibrated to run at 3 mph but Schirding says he never really just drove 3 mph. “We were trying to get 15 pounds of seed an acre on, but got more than that because we didn’t cover all the acreage,” says Schirding, who no-tills 1,350 acres of corn and soybeans.

Last year, Schirding installed a variable-speed drive on the seeder that lets him control the air seeder’s speed with a tablet. Plastic tubing routed under the combine transports ryegrass seed from the seeder to nine flutes that deposit the seed onto the soil behind the soybean header, where it’s subsequently covered up by soybean straw and chaff.

To learn more about the cover crop seeder Ray McCormick attached to his combine, and how he did it, see the article “No-Tiller Seeds Cover Crops While Harvesting,” originally published in April 2012.

Farming 20 miles north of Springfield, Ill., Schirding usually harvests soybeans in late September or October. He plants 3.2-3.4 soybean varieties and has found seeding ryegrass after Oct. 5 doesn’t produce good results. But he doesn’t want to go with earlier soybean maturities and give up yield.

Last year the ryegrass seeded toward the end of harvest had half the emergence of the earlier seeding, Schirding notes. He applies about half of his nitrogen (N) on in the fall with anhydrous and emergence was also weaker where those bands were located.

But he still seeded covers on 400 of his soybean acres last year. The 6-bushel Gandy seeder carries about 350 pounds of seed. Schirding keeps the seeding rate lower so he isn’t stopping every 20 acres to fill up.

Two years ago, Schirding seeded 10 pounds of annual ryegrass, 3 pounds of rape and 2 pounds of clover per acre on soybean acres going to corn, although he subbed in rape for radishes last year. He wasn’t thrilled with the results from radishes, so he plans to go back to rape and clover this year.

Schirding’s goal with cover crops is to increase soil health, noting that soil in his area once had 6-8% organic matter before it was cultivated, but it’s down to around 3.5% now.

“Just getting another 1% organic matter will release 20-30 pounds of N and hold a half inch of moisture,” Schirding says. “The more organic matter we put back in the soil, the healthier it is and the less damage we will do to it.”

The two-for-one harvesting-and-seeding operation isn’t just good for his soils, but also favorable for his pocketbook. Schirding only has $15,000 invested in the air seeder and he’s spending $10 an acre for seed, rather than the $20-$40 an acre or more that some no-tillers may spend.

Part of using this one-pass system is terminating cover crops properly in the spring ahead of planting, and Schirding admits he’s working on a learning curve with terminating ryegrass. Last year, he notes, wet weather kept many no-tillers out of the fields when they should have been terminating the cover.

Ahead of planting corn last year, Schirding has tried using 8 gallons of water and 40 ounces of Roundup to terminate ryegrass, but the poor kill and subsequent competition from the covers caused a 10% yield hit. “We’re using more water this year, 12 gallons, and the same amount of Roundup and we’re getting a better kill,” he says.

Bringing Up the Rear

Another variation of the combine-to-covers solution has emerged on the farm of Hal and Ty Brown, who no-till about 7,000 acres of corn and soybeans and operate a farm equipment dealership in Rossville, Ind., 20 miles east of Lafayette.

In discussing getting some cover crops into harvested corn fields, they decided to pursue a system of seeding it during harvest. They ordered a Horsch Partner HT air seeder and fastened it to the rear of their Claas Lexion 760 combine. Tubing running under the combine carries seed to the front end of the stalk roller, where it’s deposited under their folding 40-foot Drago corn head.

The Horsch seeder was designed to fasten to a 3-point hitch on a tractor, so the Browns used that design to build a mounting apparatus on the combine.

“What we spent the most time on was finding a hydraulic line with the right pressure to run the seeder, as there’s no manual to explain that,” Hal says. “Sometimes the lines didn’t turn the fan fast enough. Then the mechanics looked at it and found the right one.”

The 80-bushel seeder is programmed with section control and automatically adjusts volume based on the speed the combine is going. No-tillers could use the machine to mix cover-crop seed on the go, as the Browns mix their own seed.

At harvest, a seed tender is used to fill the seeder up every 110 acres, which takes about 7 minutes each time. They seeded about 2,500 acres last fall with this setup and Hal estimates they spend only 20 minutes a day filling the seeder.

They usually seed 40 pounds an acre of cereal rye, but may need to cut that back to thin out stands a bit, Hal says. He estimates they’re only spending $8 an acre on seed, with no extra tractor, driver or fuel required, although someone must man the seed tender.

“This setup took me out of the equation and I’m able to help with corn harvest,” Hal says. “There’s no tractor involved and we’re getting the covers on. It’s hard to beat doing two things at once.”

At the National No-Tillage Conference earlier this year, McCormick told attendees that several years ago he realized his son was spending too much time drilling cover crops during harvest. 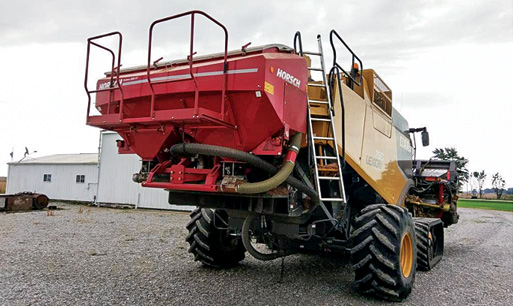 BACK TO FRONT. Tubes running under Hal and Ty Brown’s Claas Lexion 760 combine carry cover crop seed to the front end of the stalk roller, where it’s deposited under a folding 40-foot Drago corn head. The Horsch seeder was designed to attach to a 3-point hitch on a tractor, so the Browns used that design to build a mounting apparatus on the combine.

Freshly picked corn and soybeans were also damaging tires on the drill and tractor.

After coming up with an idea to place an air seeder on the corn head, McCormick obtained a used Gandy air seeder that was just sitting in the parts area of the Gandy factory shop.

“The installation was quick and easy. We built brackets and mounted them on the crossbeam of the corn head. The blower is driven by hydraulics and the seed is electrically driven, and we ran distribution hoses under the head between the snapping rollers on the corn head and, later, off the back of the grain platform,” says McCormick, who no-tills 2,400 acres of corn and soybeans near Vincennes, Ind. “We put it on the corn head in less than one day.”

For no-tillers looking at a system like this, it might take some experimentation to discern where air seeders fit best on individual headers, and how it can be connected to a combine. For example, McCormick noted his new MacDon draper header runs off of spring pressure and added weight on the crossbeam throws it out of balance. So he spent the winter building some supports so he could place the air seeder on the center crossbeam, slightly over the reel.

McCormick says he’s switched from applying cereal rye and Austrian winter peas to smaller-seeded covers like annual ryegrass, crimson clover and turnips — which has helped reduce his seeding rate and costs — and he’s seeding different cover crop combinations, depending on whether fields are going to corn or soybeans or are typically flooded. He’s spending a maximum of $13.50 an acre for his blends, but has still managed to cut his seeding rate in half and removed the cost for a separate application.

“The profound thing to me is the time savings, labor savings, and not having an airplane do it or having an extra trip,” McCormick says.

Additionally, McCormick has calculated, that the benefits of no-till and cover crops providing biomass and fixing nitrogen (N) are saving him $25.43 an acre in N application where covers are seeded on his farm. This is based on 50 pounds of N credits from cover crop biomass in the field and 30 pounds of N from 70-bushel soybeans, which he says is a conservative estimate.

McCormick typically aims to apply 0.90 pounds per acre of N for each bushel of corn, but when he sidedresses corn he’s entering in those credits, taking into account how much N was applied with the planter, and when DAP (diammonium phosphate) was spread.

“I like to get my cover crop money back with N credits when we sidedress,” he says.