One More Way to Seed Cover Crops During Harvest

A No-Tiller from the eastern Corn Belt found a way to turn mere conversations about seeding cover crops during harvest into a reality.

Kevin Staats, who no-tills 1,200 acres of corn and soybeans near Danville, Ohio, with his father Tom, just finished his first year of seeding cereal rye with a boom and small air seeder fastened to the back of his combine.

After seeding rye in mid-October across one third of his acres, it was greening up well a few weeks later.

Staats says he gave this approach a try after hearing his neighbor, Bob Heffelfinger, talk about seeding cover crops during harvest, and reading accounts of small air seeders being fastened to the front of combines to seed covers like annual ryegrass.

“I wanted to use a bigger hopper, so I mounted it on the back instead,” Staats says. “So far this year it’s working pretty well. I think we will do it again next year.”

In the Staatses’ project, Kevin started by purchasing a 28-bushel Valmar 2055 granular applicator, an old hydraulic tank off another combine and a second hydraulic motor, and rigged them up so one motor runs the fans on the seeder and the other runs the metering system. 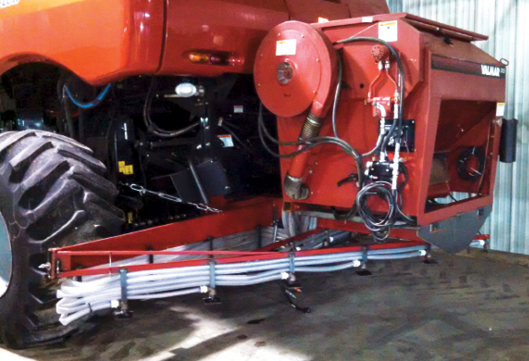 Multitasker. Danville, Ohio, no-tillers Kevin and Tom Staats attached a Valmar 2055 granular applicator to the rear of their Case IH 7120 combine to seed cereal rye into corn or soybean stubble.

He also found a shaft that turns at the right speed and mounted a sprocket to it, so the application system is chain driven.

“It was very easy to put on,” Staats says. “It’s a completely self-contained hydraulic system, so if something went wrong with the combine we know it’s not because of something we did.”

The Staatses then fastened a 34-foot-wide folding boom to the rear of their Case IH 7120 combine, which has a 35-foot header, “so when we’re taking a 35-foot pass we’re spreading seed across the whole width,” Staats says.

“The seeder applies the rye seed, and then the chaff coming out of the combine covers the seed to help it germinate. You take the unit off the combine by pulling one pin and uncoupling two hydraulic hoses and a wiring harness.” 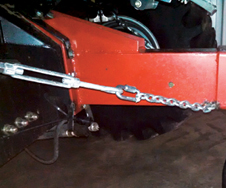 Easy Fit. Kevin and Tom Staats can remove the Gandy applicator from their combine by pulling one pin and uncoupling two hydraulic hoses and a wiring harness.

Additionally, the Staatses are running the air seeder through their Ag Leader Integra monitor so they can put down a rate of 1-2 bushels per acre of seed, depending on individual field conditions.

“If we’re going across a hillside or field where we have a low spot that is susceptible to washouts, we hit the second rate for 1½ bushels. We can do everything from the cab,” Kevin says. “Once we got it going it was so easy, and the worst part was filling it up.”

The terrain on his farm is fairly hilly and that’s the main reason Staats is seeding cover crops. The Staatses plan to harvest 20 acres of cereal rye in July or August for their own seed, and will terminate the rest ahead of corn planting in late April.

They may also mix in some radishes with the cereal rye, on advice from their seed consultant, Lance Weaver of Howard, Ohio-based Seed Consultants.

“Whatever cover crop grows fast and has good root structure is what we’re after,” Staats says.

More Ideas for Seeding Covers, Harvesting Crops in One Pass

[Video] Getting Your Drill Ready to Seed Cover Crops