By Laura Barrera posted on June 15, 2022 | Posted in Seeding Practices

From airplanes and helicopters to highboy seeders, spreaders and planters, there are plenty of options for seeding cover crops. But many no-tillers prefer to use the tried-and-true no-till drills to seed covers.

No two no-till systems are exactly alike, especially when it comes to seeding cover crops with drills. Crop rotation, cover crop species, geographic location, soil type and the drill itself all factor into how cover crops can be effectively seeded.

But there are a few common challenges each no-tiller may face, and different solutions they can try on their own farms. 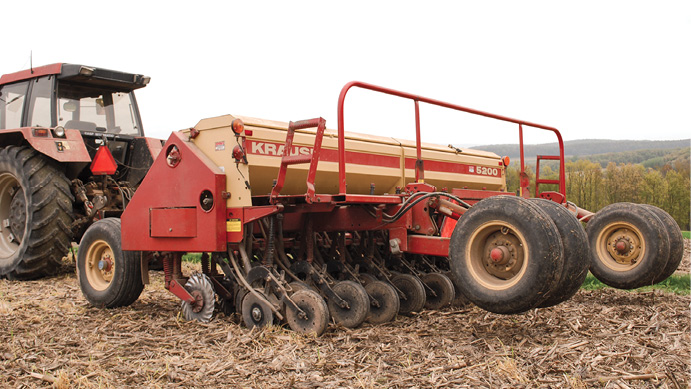 No-tillers should treat cover crops like cash crops, which means maintaining the drills in top-notch condition, rather than putting maintenance issues off until later, says Ron Hoover, a coordinator of onfarm research at Penn State University.

Among the priorities should be replacing worn parts, especially coulters, discs and opener-unit pivot bushings that ensure drill openers are tracking correctly.

“If the cover crop is as important as we think it is, then let’s treat it as an important crop,” he says.

He’s seen seed get wet in the delivery system during rain and begin to grow in the seed tubes, so he checks the tubes regularly during the cover-crop planting season.

Sometimes other adjustments and updates need to occur to improve seeding even more. For South African no-tiller Egon Zunckel, that means occasionally removing seed-firming wheels from his Pierobon drill because reduced residue flow can cause plugging between the seed discs.

He also removes the cutting discs, which he says are similar to the Great Plains vertical tillage coulters, in wet conditions when they bring up too much soil and cause the seed unit to plug.

One thing Hoover thinks no-tillers should look into is using twin closing wheels, arranged similar to those on corn planter units. This would pinch the furrow closed, instead of attempting to collapse the furrow wall with the single vertical closing wheel. He says a few drill manufacturers are starting to offer this option.

“I think that in many situations, especially damp or compact soils, the success of the cover crop would improve if the farmer looked into changing from a single-wide closing wheel that travels directly over top of the furrow, to the twins that have the v-type configuration,” he says.

Some no-tillers might even consider using spiked closing wheels, depending on moisture levels and compaction in soils, he adds. The ability to adjust twin closing wheels to close the furrow above the often shallow-placed smaller cover-crop seeds ­— and not “pinch” them out of the furrow — is an important consideration when shopping for this attachment.

Seeding cover crops through heavy residue, such as corn stalks, or hard soils can be challenging.

Adding weight to the drill is an option, but Hoover says no-tillers should make sure the weight is actually transferred from the frame to the openers, where it’s needed. Sometimes that requires adjusting the down-force springs, or it may even require heavier springs.

“Just about every drill has the ability to have the springs tightened in such a way they’re able to transfer more weight from the frame onto the drilling apparatus,” he says. “But there are situations where the springs just may not be heavy enough, and the farmer may have to see about acquiring heavier springs.”

University of Nebraska Extension ag engineer Paul Jasa adds weight to his drill to help the machine cut through freshly harvested residue and penetrate soils that can be dry in the fall. He says drilled Austrian winter peas need to be at least 3 inches deep to overwinter in Nebraska, so he sets his drill deeper as well.

Using down pressure is another way of working through heavy residue and hard soils.

Soil tilth and moisture conditions influence Troop’s down-pressure settings in maintaining a uniform stand, but he says he doesn’t want cover-crop seed pressed into the soil too hard. He monitors down pressure closely and also sets his drill deeper if he’s running on a deep layer of residue.

No-tillers must also be cautious of setting the drill too deep, specifically when the units are outfitted with a fluted coulter, says Carroll, Ohio, no-tiller and cover-crop expert David Brandt. It’s a common mistake that he sees.

“If we want to have a good stand, we need to have good soil-to-seed contact, where seeds are placed at the appropriate depth. Sometimes that’s only going to be provided by making modifications to the drill,” adds Hoover.

Maintaining no-till drills to the proper standards may only be the first step to drilling covers.

Another wrinkle is thrown in when drilling cover-crop mixes that are becoming more and more popular, especially when it comes to getting the planting depth correct.

Brandt — who is also the technical adviser for his family’s cover-crop seed company, Walnut Creek Seeds — says no-tillers should pick just one species from a mix of eight to 10 to do well.

“We always pick the species with the largest seed in the mix and try to plant it the best, because the largest species will help pull up the smaller seeds we’re using,” he says.

“Any time you’re going to put a combination in, we’ll typically run it through one box,” he says. “What happens when they’re seeding all at the same depth together is the small seeds typically follow the large seeds to the surface.”

Fuhrer says most no-tillers in North Dakota are seeding multiple species from the same bin and have had success with this setup. Jasa has had success with his CrustBuster drill’s adjustable-slot seed meters, which he says can handle different seed sizes.

He drills a 50:50 mix of cereal rye and Austrian winter peas after corn and soybean harvest. Jasa either plants or drills bin-run or leftover soybeans, or grain sorghum, following wheat harvest, setting the meters to the largest seed in the mix.

Determining where to set the seed-cup levers can be tricky when drilling cover crop mixes. Brandt says that for blends with larger seeds, the lever should be in the middle notch so it has space to run between the rotor and the bottom of the cup without cracking the grain.

In general, if a no-tiller is using a 2,800 or larger count, they should use the second or third notch, and use the first notch for smaller seeds.

To calibrate the drill, Brandt suggests collecting and weighing the material from one of the seed meters for the distance equal to 1,000th of an acre, which will give a no-tiller an idea on how to set it.

“We always suggest you set it two or three notches big for the largest seed that you’re trying to seed and go from there,” he says.

Brandt adds that no-tillers also need to consider their seeding rate, and recommends keeping it on the lower end to prevent cover crops from becoming too thick and creating problems when it’s time to plant the primary crop.

Cameron Mills, a no-tiller in Walton, Ind., watches his seeding rate with his grasses — especially annual ryegrass — because it can be overwhelming and choke other crops. 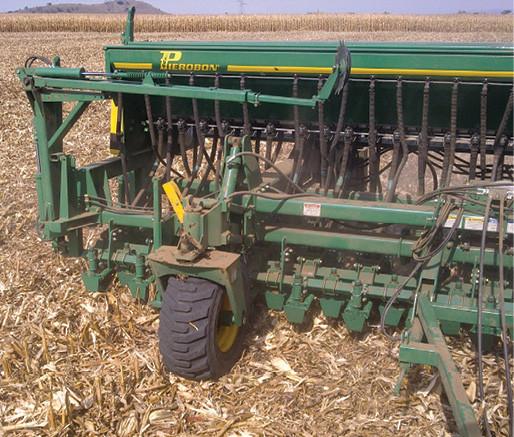 Fuhrer says some no-tillers separate different seed sizes, although the practice isn’t very common in his area. Such a setup has its benefits and challenges.

Using an 1890 John Deere disc drill with a 1910 air cart, no-tiller Scott Inbody of Choteau, Mont., prefers to separate the large and small seeds into different tanks. He says he gets a better flow than if he put all the seeds in the same tank and ran them with only one meter roll.

Inbody seeds a mix of radishes, turnips and hairy vetch, but plans on replacing the vetch with sunnhemp and possibly add sorghum-sudangrass.

Zunckel also separates his seed. His canola seed goes into his Pierobon drill’s fine seed bin, while his oats and radishes go in the same bin. He does this because otherwise the canola will settle out or separate in the mix, resulting in erratic stands. He’s also drilled oats in their own bin, and mixed radish with MAP as a carrier in the fertilizer bin.

If settlement is a problem and a no-tiller faces having to mix seeds in the same bin, Fuhrer suggests filling the tank only a third to half full to help avoid it.

One benefit of separating seeds is being able to plant them at their preferred depth. 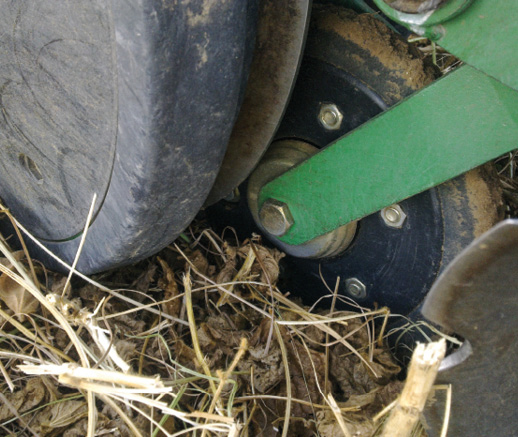 Larger seeds can be metered from the large box and dropped into the furrow through the opener boot.

Hoover says smaller species, like red clover and annual ryegrass, should not be placed deeper than ¼ to 3/8 inch in medium or heavy Mid-Atlantic soils. They can be slightly deeper in sandier soils where there’s less resistance for the seed to push through.

Shallower seeding of these smaller seeds is often accomplished by metering them through a second “legume” seed box where seed exits the seed tube behind the furrow openers and in front of the furrow closing wheel(s).

If a seed is going in the ground later in the season and a no-tiller is confident moisture will be fairly regular, they shouldn’t have to worry about seeding it as deep, he says.

One way to tell if a smaller seed is too deep is based on whether there are any seeds found on top of the soil after drilling.

“When I’m planting clovers or annual ryegrass, if I don’t see any — or if I see very few — seeds uncovered after I’ve begun drilling a field, then I’m probably planting too deep,” he says. “On those smaller species, I like to see as much as 5% to 10% of those on the surface.

Double Up No-Till Benefits by Cover Cropping for Forage