Exclusive survey reveals cover cropping trends through 2022, including increasing acreage planted to covers, the top benefits farmers gain from covers and multiple methods for seeding them.

Farmers across the nation participated in the 3rd annual Cover Crop Benchmark Study published by Cover Crop Strategies. The comprehensive survey featured 48 questions about topics including management practices, motivations and expenses in 2021 and plans for 2022.

“Over the past few years, we’ve been able to track meaningful changes in cover crop management that allows growers to compare their own operation to those of their peers across the country,” says No-Till Farmer editor Frank Lessiter. “No other media property has a more in-depth understanding of the challenges and opportunities with cover crops on farms than we do. And we’re grateful that so many farmers have chosen to participate.”

The average number of cover crop acreage per respondent was 544, with individual totals ranging from 5,500 to 0.5. The survey revealed noteworthy changes in management practices, strategies, and expenses, painting a more vivid picture of cover cropping trends through 2022. In the following pages, we’ll break down the results and share perspective from cover crop users and analysts.

Participants were asked to rank the level of benefits seen from cover crops in their operation. Options included no benefit, some benefit and maximum benefit. 20.5% ranked erosion prevention as a maximum benefit. Improved rainfall infiltration was second with 11.9%, and better soil biological activity third with 10.9%. These results go hand in hand with erosion prevention being selected as the most important reason (18%) for seeding covers.

Ryan Gibbs, of Gibbsfield Ag, sells cover crop seeds in Hopkinton, Iowa. Sales have nearly quadrupled over the past year as more growers learn about the potential benefits, he says.

“I show people how covers can save them money,” Gibbs says. “If you’re paying $20,000 an acre for ground and you’re losing one-tenth of an inch a year from wind and erosion, it’s easy to pencil in the cost of a cover crop there.

“Water infiltration is another huge benefit. Look at farmers out west who haven’t gotten rain in a while. But when they do, it rains 4 inches. They must get that water to stay in the soil.”

“Cereal rye is a great weed suppression for soybeans,” Gibbs says. “Last year alone on my farm I cut back over 40% on herbicides. I went to buy my chemicals this year and I had a whole pile left over from last year. That paid for the cover crop seed two times over.

“Legumes such as clovers and vetch produce nitrogen (N) in the soil for corn. Last I checked N was $1.60 a pound in our area. A cover crop might cost you $15 an acre, but it also might scavenge 30 pounds of N.”

Growers Cashing in on Incentives

The data reveals that 50% of total respondents received some form of incentive payments to seed cover crops. That’s down 1 percentage point from 2020 and 9 points from 2019. 23.1% received payments from federal programs like the Environmental Quality Standards Program (EQIP) and the Conservation Stewardship Program (CSP). 11% received state payments, while 9% took advantage of local payments from Soil and Water Conservation Districts, among other sources.

The overwhelming majority of survey respondents (59%) are no-tillers. Strip-till (12%) is the second most popular practice. Conventional-till (9%), vertical-till (9%) and mulch-till (7%) round out the top 5.

Experience on the Rise 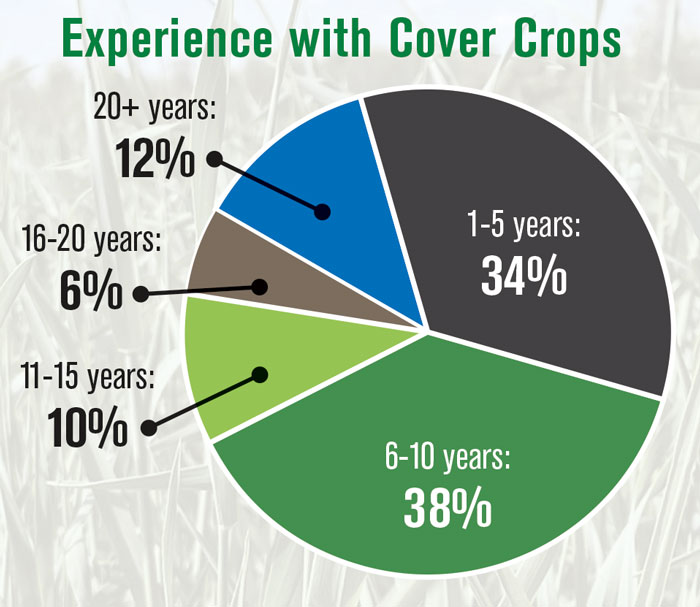 Sixth-generation farmer Robb Ewoldt is among those who started planting covers over 20 years ago in eastern Iowa.

“We started in 1996 strictly for selfish reasons,” Ewoldt says. “We’d plant cereal rye and chop silage in the fall, to make cheap feed for cows. But in 2005 during a drought year, we had an ‘a-ha’ moment. We planted beans into cereal rye. The field averaged 24 bushels per acre, but where we planted cereal rye, we grew 36 bushels. That told me there was something going on with cover crops that we needed to explore even more.”

Ewoldt has experimented with many species over the years including perennial ryegrass, oats and radish. Cereal rye and winter wheat are his favorite cover crops.

Watertown, Wis. no-tiller Tony Peirick has a decade’s worth of experience planting green with soybeans and corn. He plants into cereal rye and terminates shortly after. 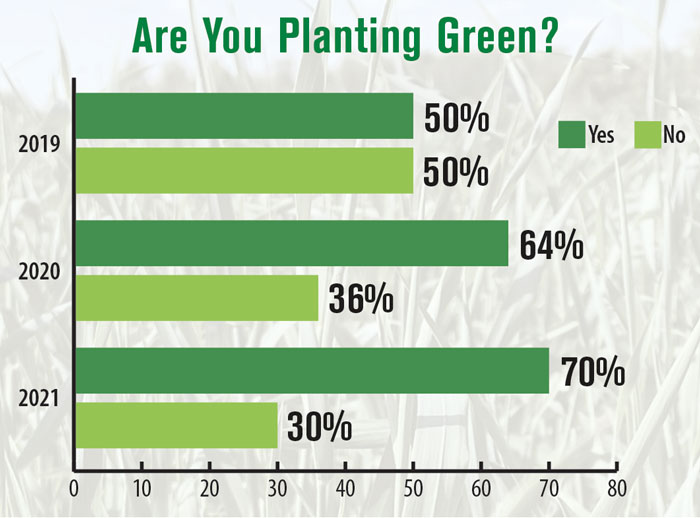 “Cereal rye will scavenge nutrients and protect our soil over the winter, keeping a living root in the ground for increased biological activity,” he says. “When you plant the corn into it, it will help the plant develop. Then as it terminates and dies it will give the nutrients back to the corn as it grows.

“I get a lot of calls from guys who are afraid of planting green. I tell them it’s not hard to do. Plant green and terminate right after. Glyphosate will terminate cereal rye very easily.” 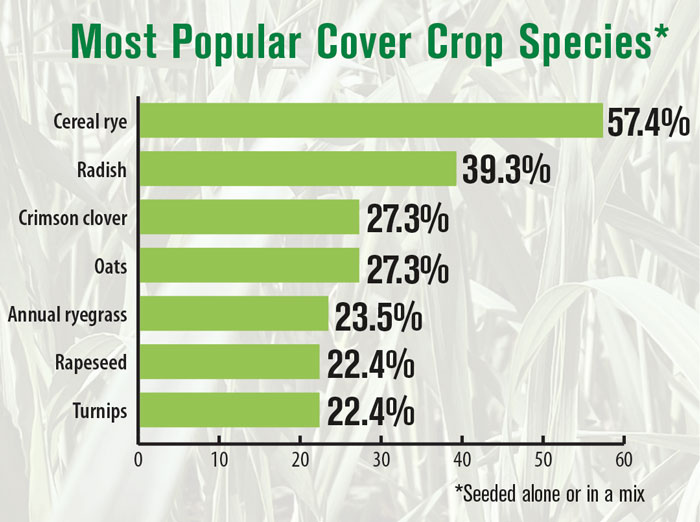 Andrew Reuschel never shies away from mixing it up on his farm in Golden, Ill. The fifth-generation farmer says you can’t go wrong with cereal rye ahead of soybeans, but for corn he sometimes uses up to 5 species in a mix.

“My go-to mix in front of strip-till corn the past couple years has been 7 pounds of cereal rye or 7 pounds of barley and 7 pounds of annual ryegrass. Depending on the year, timing and price, I’ll add crimson clover and rapeseed into it.

“We also have acres that we experiment on with a ‘shotgun blast’ of cover crops. I could plant 30 species easily, because I’m just watching and observing what works on high or low grounds. We have variable grounds so there’s never a one size fits all.”

Growers once again picked drilling (28%) as the top method for seeding covers, unchanged from the previous two surveys.

Sara Bauder, an agronomy field specialist with South Dakota State University, contends that drilling is the most reliable choice.

“Drilling is likely the most efficient way we can plant a cover crop because we get good seed-to-soil contact,” she says. “Broadcasting is more dependent on timely rains to get seed started. Also, there is typically a poorer germination rate expected so you end up putting out more seed.”

28% said they used a drill to interseed. 26% used a broadcast spreader into a standing crop. Airplane/helicopter (20%), interseeder device/toolbar (13%), high boy/self-propelled sprayer (8%) and planter (4%) were among the other choices.

Post-Harvest the Time of Choice

Most growers (64%) said they seeded cover crops post-harvest. The second most popular option (20%) was within 24 hours of harvest. 15% seeded pre-harvest into the crop. 9% interseeded into early emerging crops and 7% picked spring frost seed.

Seeding a cover crop like cereal rye early will help maximize one of its key benefits, says Dr. Erin Silva, associate professor of organic and sustainable cropping systems at the University of Wisconsin. 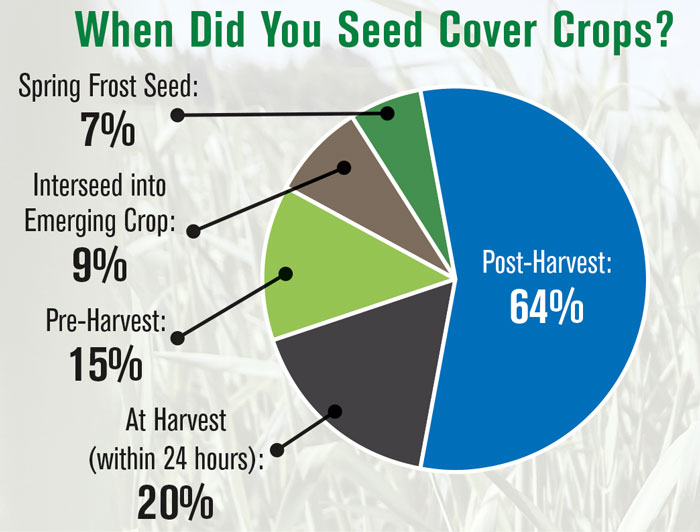 “We know that cereal rye can certainly germinate and establish with later planting dates in October, November and even into December,” Silva says. “But the problem is we don’t get the degree of tillering we need to get the adequate weed suppression in a cover crop based no-till system. If we want to completely eliminate herbicides, we need to plant that cereal rye early. In a state like Wisconsin, for example, we’re talking the middle of September.”

In Washington, Iowa, you’ll find Michael Vittetoe waiting until at least the second week of October to plant cereal rye into corn stalks on his 1400-acre farm.

“I don’t want to make the rye super aggressive to the point where it completely shades out my soybeans in the spring,” Vittetoe says.

The former civil engineer waits even longer to plant on soybean stubble ahead of corn, holding off on drilling until at least the beginning of November.

“In our system, I found that rye ahead of corn works a lot better when it’s seeded late in the fall and is tamer come spring,” he says. “We’re out here to grow corn to make money, not to grow cover crops to get likes on Twitter. Whatever it takes to get the best corn yield, that’s what we’re going to do.”

Carroll, Ohio no-tiller Dave Brandt terminates after planting corn. He uses an I&J roller-crimper, which crimps the cover crop every 4 inches and comes with an added benefit. 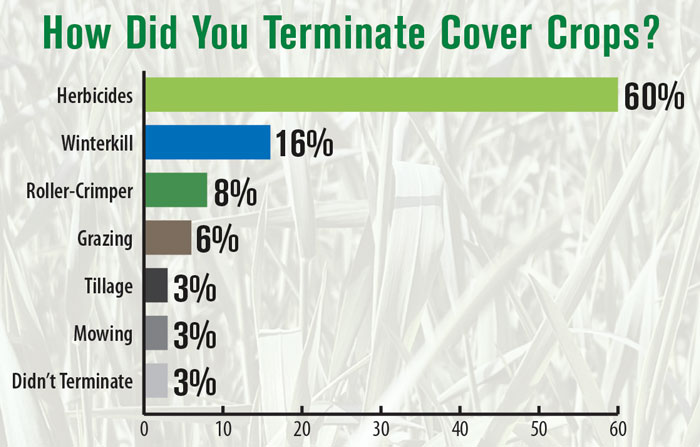 “If for some reason you’re not getting a seed trench closed really well, the crop roller will actually lay that residue down in the seed trench,” Brandt says. “We get close to 100% stands every year by using the crop roller after we plant. Also, we can usually omit the pre-emergent herbicide and the burn down about 90% of the time. We may have to use post-emergent herbicide 50% of the time. It just depends on how tall and how thick the biomass is.”

The data for soybeans tells a different story, with most total respondents (45%) terminating covers after planting. 28% terminated before planting, 18% at planting and 9% didn’t terminate.

For wheat fields, the overwhelming majority (55%) either didn’t terminate or terminated before planting (40%). Only 4% terminated at planting and 1% after planting.

Gylphosate was the herbicide of choice with 53% using it to terminate their cover crops. 2,4-D was the second most popular pick (26%). Other herbicides used include paraquat (8%), glufosinate (4%) and clethodim (4%). 6% said they used “other” to terminate.

The percent of growers who grazed their cover crops remained almost the same between 2020 and 2021. The majority (75%) of farmers did not graze or rent land for grazing. 25% grazed covers, down just 1 percentage point from 2020.

Aberdeen, S.D.’s Gene Holt relies on covers for about one-quarter of his rotational grazing schedule. His 5,000-acre grass-based rangeland was home to 1,100 head of cattle last year. They grazed a mix of sudangrass, millet, turnips, milo, oats and rye from January to March.

“Then from April on, it’s predominantly grass grazing and corn stalks in early winter unless the snow gets too deep,” Holt says. “We run our cattle in large herds to keep the graze period as short as possible. Most of the time it ends up being a 5-day graze.”

Holt has company when it comes to rotational grazing, with 36% choosing it as their preferred system for 2022. 28% will go open/unrestricted and 17% selected a mob/high density system. 3% plan on utilizing a switchback system.

When asked what livestock they graze on cover crops, 69% said beef, 5% said sheep, 4% said chicken and 16% said other. Goats, hogs, and dairy checked in with 2% each.

Estimated expenses for cover crop seed were similar to what was seen in previous surveys. Most growers (50%) spent between $10 and $19.99 on cover crop seed per acre, just a 2-point decrease from 2020 and the exact same from 2019. 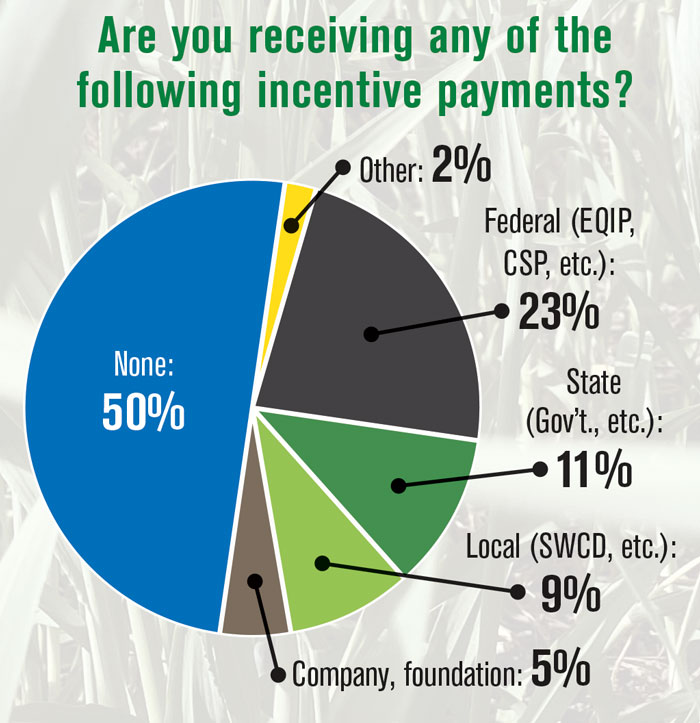