Lupin is a well-known garden flower, and is an important part of a healthy habitat. Lupin grows rapidly and puts nutrients back into the soil. (Lupin is commonly referred to as “lupine” for those familiar with this plant.)

Lupin is a legume. Legumes like lupin make nitrogen available in the soil for other plants that would not otherwise have access to the precious nitrogen. Due to its resilience, lupin has real potential as a winter cover crop for farmers and growers.

Joseph Knoll, research geneticist (plants) for the USDA Agricultural Research Service (ARS) located in Tifton, GA, and his team evaluated several species of legumes, including narrowleaf lupin, at two farm locations in Georgia. The study focused on how lupin can serve as a winter cover crop and how it can affect subsequent high-biomass sorghum and cotton yields. As Knoll attests, “you can see the difference in height and greenness of the plants.”

The study was published in Agronomy Journal, a publication of the American Society of Agronomy. 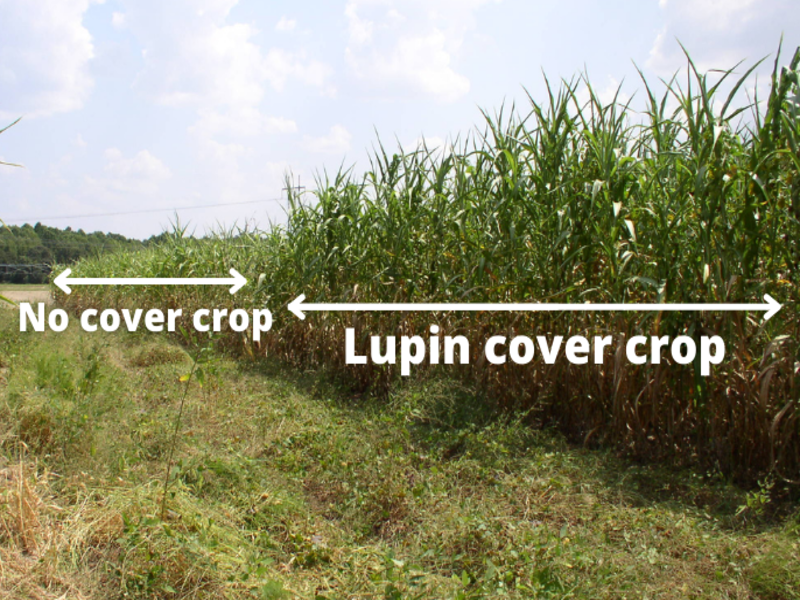 Sorghum, a highly productive biomass crop, can vary greatly in crop appearance. Some crops may grow as tall, green stalks. Other neighboring sorghum, however, can pale in comparison to height and greenness. What made the difference? “The tall sorghum in the foreground is after growing lupin during the preceding winter,” says Knoll. No matter how plants look during one growing season, though, farmers need more information to make sound management decisions.

Following the changing of seasons, the team followed a rotation of sorghum, winter cover, and cotton. As the crops grew in real time, the research team recorded observations over the course of the five-year study. The research team compared lupin with several other types of cover crop legumes and rye. They found lupin to harbor the greatest biomass and nitrogen for summer crops. The long-term data the research team produced will allow farmers to consider land management strategies that will benefit not only their revenue, but also the land and environment they depend on.

The soil data alone will fuel future research. Due to the vast amount of data, Knoll and his team plan to present this information in a forthcoming research paper. The soil data will provide insight into the relationship between nitrogen, carbon, and cover crops. “We are currently pouring over the soil data from this study right now and intend to look at soil N and C effects from covers,” Knoll says.

Soil will not be the only direction for future research, though. “We are also continuing to study lupins, including white lupin, as winter cover options in the Southeast,” Knoll says.

The research was supported in part by ARS base funds.