Getting Out of a No-Till Rut with Cover Crops

Seventh-generation farmer Brian Gunderson is finding a new gear for his no-till system with the benefits of cereal rye and other cover crops.

Taking the ‘long view’ of farming comes more naturally to some growers than it does for others. But for Brian Gunderson it may come more naturally because his farm in Waterford, Wis., has been in the family for 170 years.

His father was introduced to no-tilling in 1981 and, aside from a few years where they resumed tilling on half their acreage to see if it would boost yields (it didn’t), his family’s farm has been 100% no-till since about 1987.

After 30 years of no-till, Gunderson says the farm’s routines are well-established and its results largely predictable. That wasn’t enough for Gunderson.

“I’ve been in kind of a rut,” he explains. “It's been kind of stale up until the last three years when — I don't know what single thing hit me — but cover crops became an interest of mine. So, two years ago I started with the first covers.”

Between taking classes, sitting in on talks by agronomists such as Ray Archuleta and connecting with other no-tillers who are focused on conservation techniques and watershed issues, Gunderson has become a definite convert.

“I think cover crops are the real deal ­— harvesting the sun to put carbon in the ground. We’ve been too efficient, growing monocultures with a living root in the ground only half the year. So we have to go beyond no-till. But for the cover crops to work it must be a no-till system to get the full advantage out of it.”

In addition, Gunderson has been learning about the benefits of mycorrhizal associations and how to build a fungal soil.

“From what I understand — and I’m still learning here,” he says, “no-till gives you a good bacterial system in your soil. But in order to get to a fungal system, like inside a forest, you need high carbon-low nitrogen ratio crops, along with a living root to encourage the fungal community to keep growing. And to get to a fungal soil, they say it takes at least nine months of that growth. And we can’t accomplish that if we have only six months of monoculture.”

And though Gunderson is intent on making improvements, he knows he’s had good success with no-till alone. “A friend of mine decided to go into agronomy, and he’s been reading my soil tests. He told me I have the highest organic matter of anyone he works with — averaging almost 5%. The tillage guys are more like 2%, so that showed me I’m doing the right thing. That just makes me even more passionate about these covers and doing even better.”

At their peak, Gunderson and his father farmed about 4,000 acres and they were always looking for more ground. But when his Dad became ill 8 years ago Brian began farming mostly himself and he’s now farming 2,000 acres.

Gunderson runs a 16-row Deere 1770NT planter without coulters, planting 30-inch rows. He’s avoiding coulters now as he feels it’s “harder to put two things in the ground than one. 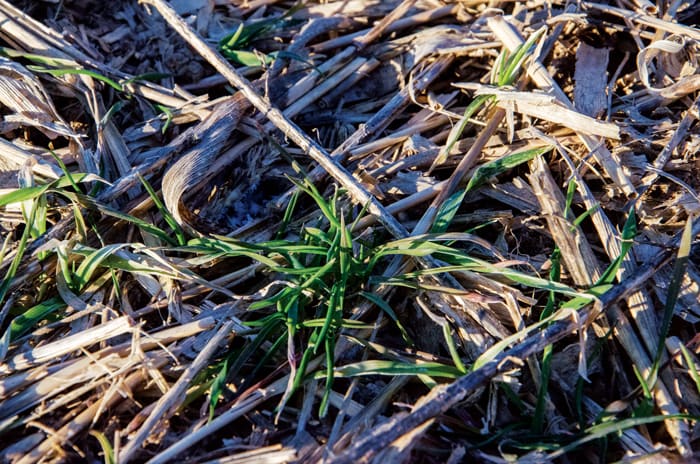 LIVING ROOT. Brian’s cereal rye, planted in September, took a hit from an early fall frost abut still kept a living root in the soil — even through the coldest months of the year.

“Instead, we stay on top of our openers, changing them more often and keeping them sharp instead of letting them get worn down to where they’re replaceable.”

Gunderson says a big key to no-till success has been the seed tube protectors from Exapta Solutions that he installed, as they maintain the width of the openers on the bottom going into the ground. “I think that’s huge,” he says. “When we used to run a normal John Deere seed tube protector, that would have been worn out in less than a year, which would have caused the openers to be pinched.”
Gunderson says he’s otherwise been running a basic planter setup for more than 20 years, which includes Ausherman single wheel row cleaners, Posi-Close closing wheels from Schlagel and 6-24-6-.25 Zink pop-up fertilizer applied in furrow with Exapta Valion seed tube guards. For corn he applies 20 gallons an acre of 32% nitrogen (N) plus ammonium thiosulfate in a 2-by-2-inch configuration.

He likes a “perfect stand” but understands with no-till a little patience is needed before bringing out the planter. “It takes a little patience, so when everybody else is out planting I’ve got to wait a few days. And I'm hoping cover crops will take care of that in a couple different ways — by the plant growing and maybe taking away moisture, and improving the soil health, which I think will allow me to plant in a moister soil.”

Gunderson’s initial experiment with cover crops was in late September 2017, when he planted a 200-acre field of cereal rye broadcast with a fertilizer spreader. Come spring the rye wasn’t very big and hadn’t come in very thick, so he wasn’t sure he’d see much benefit. But he needed to plant some corn and wanted to test his planter first.

“I went out there and made half a pass and got out and started looking, and my goodness — the ground was mellow, and even though it was damp it was different,” Gunderson recalls. “I planted that field that night, and that is not typical. There’s amazing things that can happen out of a little plant.”

That entire spring was wet. Climate data shows Waterford, Wis. received 12.35 inches of rain in a 3-month period beginning March 2017, which is 42% more rain than the area receives in an average year.

“There’s a culvert on our road here that, when it rains a lot, the water goes over the road. The culvert can’t handle it,” he says. “Then typically the water runs over the road and into my field. It will run on top of the ground and I’ll lose soil — 10 feet wide for the whole length of that field.

“With that rye planted, I did not lose one ounce of soil.”

That same spring, Gunderson was able to get soybeans into the ground earlier than expected.

“Nobody was planting in the area yet. It was too wet. My daughter was going to take her tractor safety course, so I took her out one evening on a light tractor. She’s driving, I’m on the fender, and I’m looking at the  ground and I had to stop. I looked at the ground, and now I know what it did where the corn was planted, and I looked at this ground that was going to be soybeans and realized ‘My gosh, I can plant this. The rye did something to the soil.’

“So I planted this field when nobody else could go, and it turned out real good.”

The majority of Gunderson’s farm is tiled and well-drained, but he has a 5-acre field bought from a neighbor that isn’t tiled.

“I got into that 5 acres that night and started leaving lug marks in the ground, and I figured the ground was too muddy,” he recalls. “I quit after the first pass on that part of the field.

“I came back a couple of weeks later to finish that field and I would’ve bet $10,000 that I’d have to replant that pass where I was leaving lug marks. But every single soybean was there. So even though it was muddy it was still a better muddy than it was before I had planted that rye on it.” 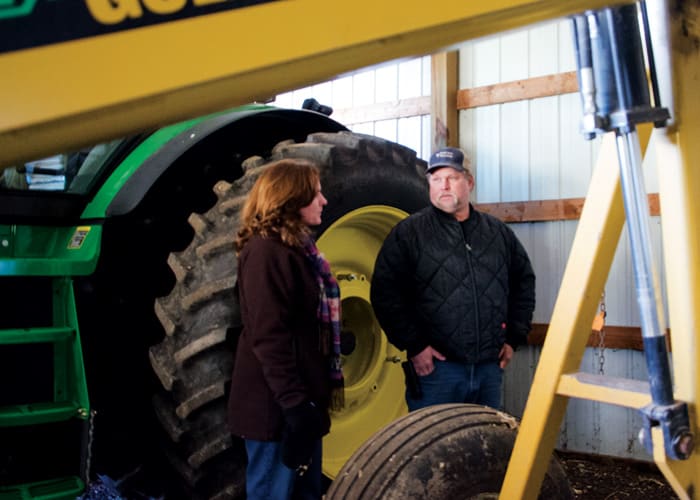 TILING MACHINE. Standing by his Soil Max Gold Digger Pro, Brian explains how he used this implement to install drainage tile in his fields over the course of about 10 years.

When it comes to yields, he says the soybeans planted into cereal rye last year showed no difference, but he knows soil health was better, based on a slake test he had done, in which his soil demonstrated good infiltration and low slaking of soil particles. He says the corn no-tilled into cereal rye actually took a yield hit as he raised 170 bushels instead of around 210.

“But that was maybe self-inflicted because I let the rye grow a little bit too long,” he admits. “When the corn was up about five inches the rye was up about six inches and the rye started turning green next to the row.

“I could tell it was stealing my fertilizer. So I terminated the rye. They say annual ryegrass will give the fertilizer back to you that year. But at that time we were so dry, I think that nitrogen wasn’t soluble to get back to the plant.”

Gunderson has enrolled his farm in the Conservation Stewardship Program, spending about 40 hours writing up a detailed plan on conservation measures for his farm for 5 years on 900 acres of his farm.

Cover crops play a big part in his plans. This past September 20, he used a Salford 246 air seeder to broadcast 100 acres of rye, barley, rape, vetch and lentils into early harvested corn. Then he used his John Deere 1990 to drill another 850 acres into an even split of corn and soybean ground. He also seeded 70 acres of winter wheat and 30 acres of cereal rye for seed.

Gunderson is seeding wheat so he can do a multi-species cover crop afterwards. He hears a lot of growers suggesting it’s ideal for corn-and-soybean farmers to do a rotation in thirds with wheat and cover crops alternating.

“I don’t really want to raise a third of my ground to wheat,” he says. “Wheat can be challenging once in a while. You get the wrong weather, it’s hard to get it harvested.”

But Gunderson is moving ahead with plans to interseed corn into vetch, rape or clover. One option is to put seed in his planter’s insecticide boxes and seed covers at the same time he’s planting corn.

Or he may use the air seeder to interseed covers into corn between V3 and V5.

“It doesn’t sound natural to be seeding something — a potential weed — into your crop, but there’s the bigger picture to think about,” Gunderson says. “At my age I’m not looking to grow acres. I’m looking to do a better job on fewer acres. My youngest daughter is talking about wanting to take over the farm someday, which gives me a good reason to try to accomplish this.”

While he doesn’t describe himself as an environmentalist, he does feel there’s something important about the food consumed by society and how it’s raised.

“In that healthy soil, I believe there’s probably more nutrients in that vegetable, in that grain that the animal eats. I think there’s a whole bigger story.” Getting Out of the Rut with No-Tilling, Cover Crop Interseeding, Weed Suppression