Strip-Till & Cover Crops Offer the ‘Best of Both Worlds’

Pictured Above: WARMING UP. Strip-tilling allows the Isleys to build soil structure between the rows, while getting increased warming because residue is being removed off the strip. Since they’ve adopted cover crops, the Isleys have noticed major improvements in soil structure and stability.

In 2012, the Isley family took a firm dislike to using the word “dirt.” They had gone through a substantial drought and were working ground, watching it turn to powder.

“There was no structure to it,” says Jake Isley, who grows corn and soybeans on 1,100 acres on Sunrise Farms near the town of Palmyra in southern Michigan. “At that point we said, ‘We can do something different here.’”

The Isleys realized they’d been treating the soil merely as a medium for planting crops and its health was declining. These days, the Isley family — Jake farms with his wife, LeeAnn, and his parents, Jim and Laurie Isley — is as careful with their soil as they are with the language they use to describe it.

“In some cases, we’d taken our soil for granted, and it was just dirt. But 10 years later, our soil is a major part of our operation and we see it as alive. And it gives to us in the sense that we rely on that soil to hold water and nutrients,” he says.

Conventional wisdom dictates that when a field is worked in the spring you can lose a half inch of soil moisture, says Jake. But under combined cover cropping and strip-till, the farm has seen much better water retention overall than before they implemented the practices.

Strip-till works well in combination with cover crops, says Jake. The Isleys’ operation has chosen not to zero-till corn, but they practice min-till and zero-till with soybeans and strip-till corn. “We don’t do any tillage between harvest and planting. The only tillage we do is with our planter,” says Laurie.

Strip-till offers the best of both worlds, adds Jake. “I get the soil structure between the rows, but I get increased warming because I’m moving residue off the strip,” he says.

Half the operation’s fields are soil sampled one year, and the other half the next. Because their acres are tile-drained, the Isleys are extremely careful not to over-apply fertilizers. 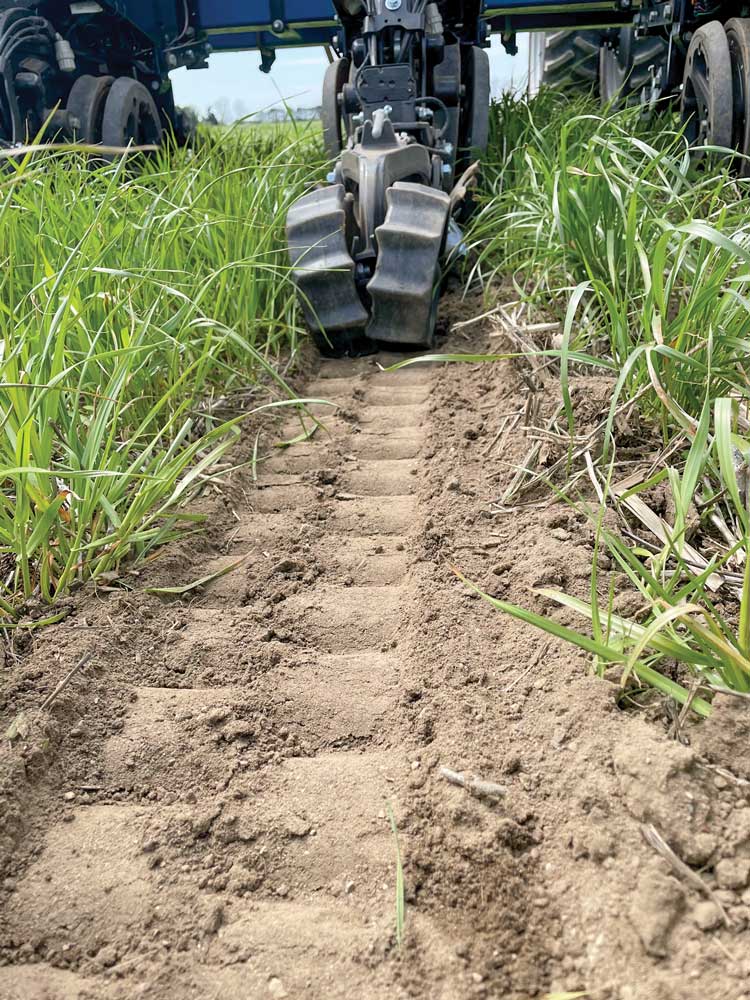 NARROW PATH. Nutrients are banded 8-10 inches deep with the strip-till rig after soybean harvest, when annual ryegrass is starting to grow. This mitigates the risk of stratification — in which nutrients concentrate differently at various soil levels and can’t be uniformly accessed by the crop — or nutrient runoff during rainfall events.

Nutrients are banded at a depth of 8-10 inches with the strip-till rig after soybean harvest, when annual ryegrass is starting to grow. This mitigates the risk of stratification — in which nutrients concentrate differently at different soil levels and can’t be uniformly accessed by the crop — or nutrient runoff during rainfall events, he adds.

“There might be a little water standing there, but I can’t see it due to the cover crop. When you’re driving around, you don’t see water in wheel tracks,” he says. “Last year was a dust bowl, but we didn’t see any of that.”

Moving forward, Jim and Jake want to start adding more species to their cover crop program, particularly a nitrogen-fixing species such as hairy vetch, Austrian winter peas or a clover. But Michigan’s climate makes it tricky to find options that they can get established so they overwinter and perform well in the spring. In 2019, they had some success with a 3-way mix of oats, clover and radish.

When the Isleys need resources and support, they turn to the Midwest Cover Crops Council. But most of their cover crop decisions are based on trial and error. They’ve found keeping things simple works well for Sunrise Farms.

“It’s simple by design. If we can do the same thing to all our acres, we can have the same plan for everything in the spring,” says Jake.

Since they’ve adopted cover crops, the Isleys have noticed major improvements in soil structure and stability.

The Isleys have been farming their land for 150 years. Jake represents the 6th generation of family farmers. Laurie says Jim’s father, Jay, was conservation-minded and passed down that mentality.

“He was always looking at innovative ways to keep moisture in his crops. He was also an early adopter of windbreaks and maintaining woodlots,” she says. He’d even looked into options for reverse irrigation so water could be pumped from the river back into the tiles.

Soon after they took over the farm in the 1990s, Laurie and Jim implemented filter strips around the operation’s waterways. After they noticed a neighbor strip-tilling, they adopted the practice primarily as an erosion control measure on particularly stressed acres.

“We’re very flat here and we have Brady sandy loam soil, which is pretty light,” she says. “If we get heavy winds, we can lose a lot of topsoil in a hurry.” The region’s soil also has reduced water holding capacity due to its gravel subsoil.

The issues with soil in Lenawee County came to the forefront in 2014 when an algal bloom in the Western Lake Erie basin, roughly 30 miles away, caused a temporary water shutdown in Toledo, Ohio. Toxic algal blooms are made up of different species of cyanobacteria, which can be fueled in part by nutrients from agricultural runoff.

AT RISK. Half the operation’s fields are soil sampled one year, and the other half the next. The Isley operation has Brady sandy loam soil, which can lose a lot of topsoil quickly in heavy winds.

“It really shone a spotlight on the role of farms in keeping the lake clean. It allowed us to look more carefully at practices that might mitigate the problem, but it also brought an influx of federal money into the area to help implement some of those practices,” says Laurie.

Jake says the farm initially opted to participate in the USDA’s Environmental Quality Incentives Program (EQIP), which provided cost-sharing for implementing cover crops in the area. They later enrolled additional fields and added a 2-species cover crop mix to enhance the program, he says.

Around this time, Jake had finished a degree in crop and soil sciences at Michigan State University and was keen to work with cover crops, which were still somewhat countercultural among farmers there. At best, some were spreading oats or wheat with their potash, he says, or frost-seeding clover into their wheat.

“But we knew that at some point we’d go through a dry spell. So, we started to look at how to mitigate that dry spell when it came,” he says. “I started thinking, ‘The soil is a sponge. How do I get as much water into that sponge as possible?’ I realized I needed to increase water infiltration with better root systems.”

The family started by adding cover crops to a few fields. These were successful, so they expanded to more fields each year. As of 2021, the Isleys strip-till and cover crop 100% of their acreage.

“We live by the philosophy of leaving it better than we got it, so we’re doing everything we can so that it’s there for the generations to follow,” says Laurie. She and Jim have 3 children — Alysa, Luke and Jake — and 7 grandchildren, so treating their soil with respect has implications down the line.

For Jim and Jake, making the choice to strip-till and cover crop each year is a corrective one that over the years will hopefully add up to significant improvements to the soil, as well as water quality in the Western Lake Erie Basin’s River Raisin watershed. 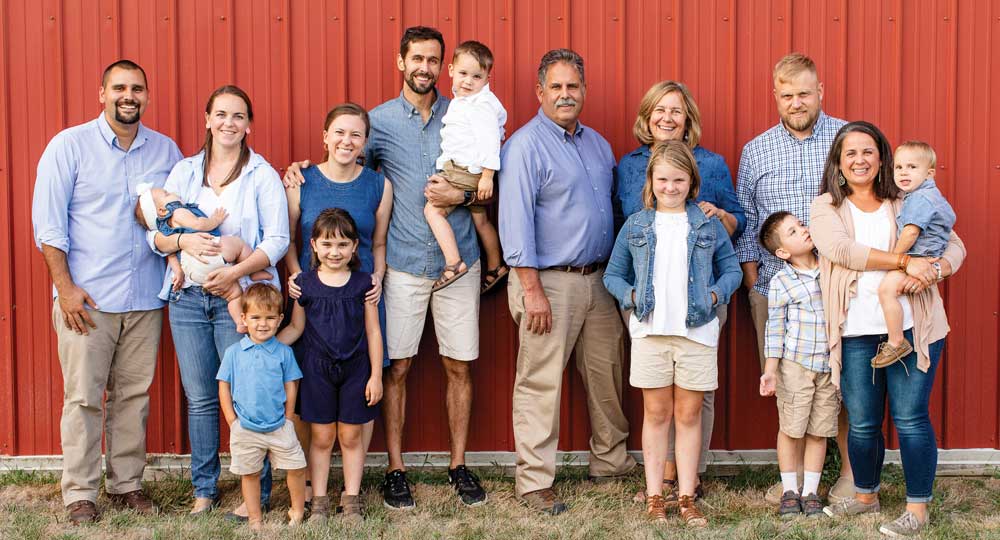 “From a sustainability standpoint, we want to do what’s right for the land, not just because we want to grow a better crop or have higher yields but because we live in this area too. We’re drinking the water. The farmer is part of the community,” says Jake.

“It sounds like a cliche, but we want to leave the farm and the legacy in a better condition than we got it. That doesn’t happen by accident — that happens through hard work and making improvements.”

Off the farm, Laurie spreads the conservation message through her work on the Michigan soybean committee and as a director on the United Soybean Board. Educating others about the benefits of conservation practices goes hand-in-hand with implementing them, she says.

“I guess we’ve always felt that what we’re doing on the farm is important, and we’ve always wanted to share that message with others. Conservation, including the use of cover crops, can be good for the environment, but also productive. Sustainability has to include profitability,” she says.

“The use of practices like strip-till and cover crops has a broader benefit than just for our operation — whether it’s maintaining the soil for future generations or improving our water quality. It’s worth giving it a try.”

Bio Strip-Till: Best of Both Worlds