The combination of a 3-way crop rotation, covers and grazing is resulting in big savings by reducing the number of tillage passes, increasing yields and improving soil health.

Pictured Above: SHORT GROWING SEASON. Kurt Stiefvater has a very short fall season to get cover crops planted, and the weather plays heavily into his selection of which cover crop species for a mix.

Salem, S.D., farmer Kurt Stiefvater, knows something about that. He started no-tilling 20 years ago to save soil moisture and save more money by reducing the number of tillage passes.

He added small grains and cover crops to the 1,800-acre operation 8 years ago and those decisions have improved Stiefvater’s yields, soil health and the condition of his cattle herd.

Stiefvater has a very short fall season to get cover crops planted, and the weather plays heavily into his selection of which cover crop species for a mix. If a field has more alkali spots, he’ll add barley. He tends to be careful with brassicas and doesn’t use buckwheat much as he doesn’t feel it’s very easy to control.

In addition to the weather, Stiefvater looks at the different characteristics of each cover crop species when choosing which ones to use in his mixes, as well as what his 130 pairs of Black and Red Angus cattle will graze. He uses an oil variety of sunflowers because even though the seeds aren’t viable, the cows love to eat them. “That’s why I tend to use more small grains and sorghum in my cover crop mixes.” 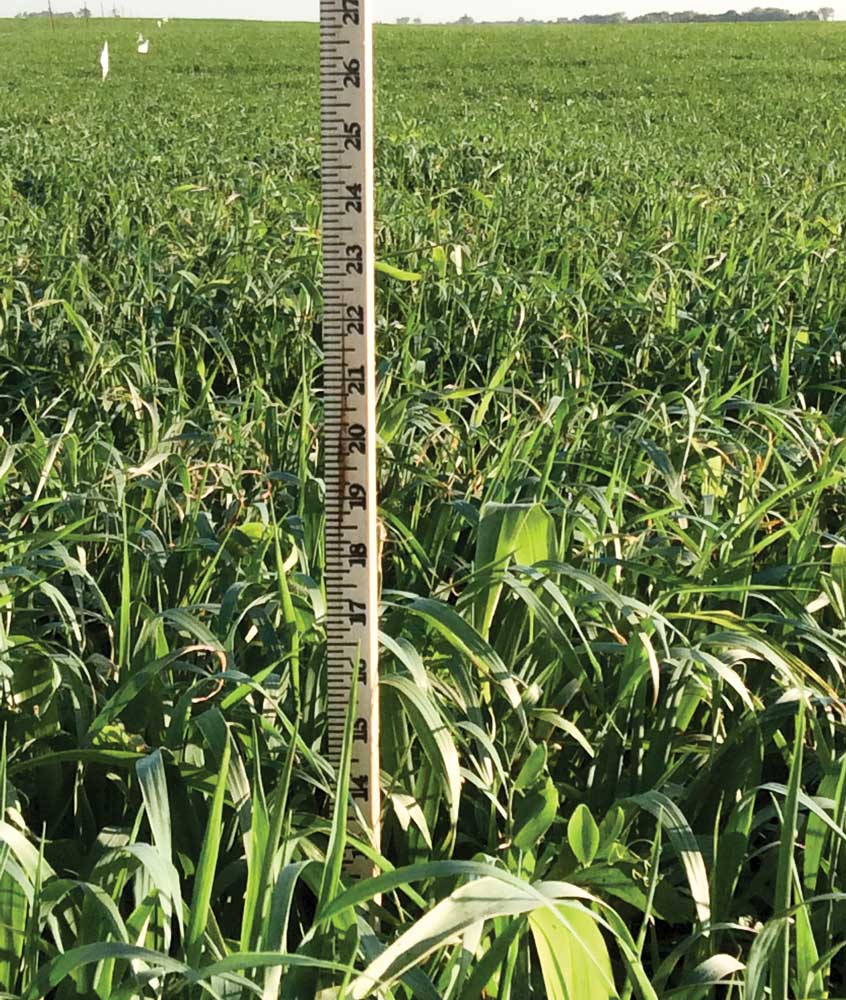 MILLION SEEDS PER ACRE. Oats are part of Kurt Stiefvater’s 3-way rotation, planted around April 1. He plants 80-85 pounds per acre of oats, with a goal of seeding 1 million seeds per acre.

Most of his cover crops either winterkill or are grazed, but for any cereal rye or winter wheat that survives winter he uses a pre-emergence herbicide application to terminate them.

He uses a 3-way rotation of corn, soybeans and oats, but has to wait sometimes for the right conditions to plant compared to his neighbors.

Stiefvater plants 80-85 pounds per acre of oats, with a goal of seeding 1 million seeds per acre, planted with a Case IH SDX with a 2330 air cart at 7½-inch spacing.

He seeds 32,000 seeds per acre of corn using a Case IH 1245 planter with Yetter SharkTooth row cleaners out in front to clear away extra residue. A Case IH MX 255 pulls the planter and the drill.

“We’ve used untreated corn before with no problems,” says Stiefvater. “It’s hard to order corn seed without a seed treatment, so then we’re stuck with that variety. We tried planting some corn with the air drill and had fair success with it. We’re trying to figure that out because it needs to be more accurate.”

Soybeans are seeded at 120,000 seeds per acre. He’s transitioning to using an air drill for planting all crops.

“We were using 38-inch rows in the late ‘90s,” he says. “We bought a planter with a splitter attachment so we could go down to 19-inch rows of corn.”

The narrower rows on the 100% no-tilled ground created a canopy quicker in the corn, blocking weeds and saving moisture since the sun wasn’t beating on the soil.

“As we upgraded equipment, we stuck with 22-inch rows,” Stiefvater explains.

Stiefvater says he applies a 6-24-6 fertilizer starter and broadcasts a light rate of P, K and nitrogen (N) as a dry fertilizer before planting.

“I apply half of the N before planting, then come back at the end of June and sidedress with 28% urea using drop nozzles on my AGCO 854 Rogator sprayer,” he says. “Dry fertilizer is put on soybeans, but it’s spread out over 2 years.”

When his corn and bean yields plateaued, Stiefvater says he had to figure out a way to make more phosphorus (P) and potassium (K) available in the soil.

“We achieved that goal by working more nutrients in the rotation and adding more crops, like oats, to our rotation,” he says. 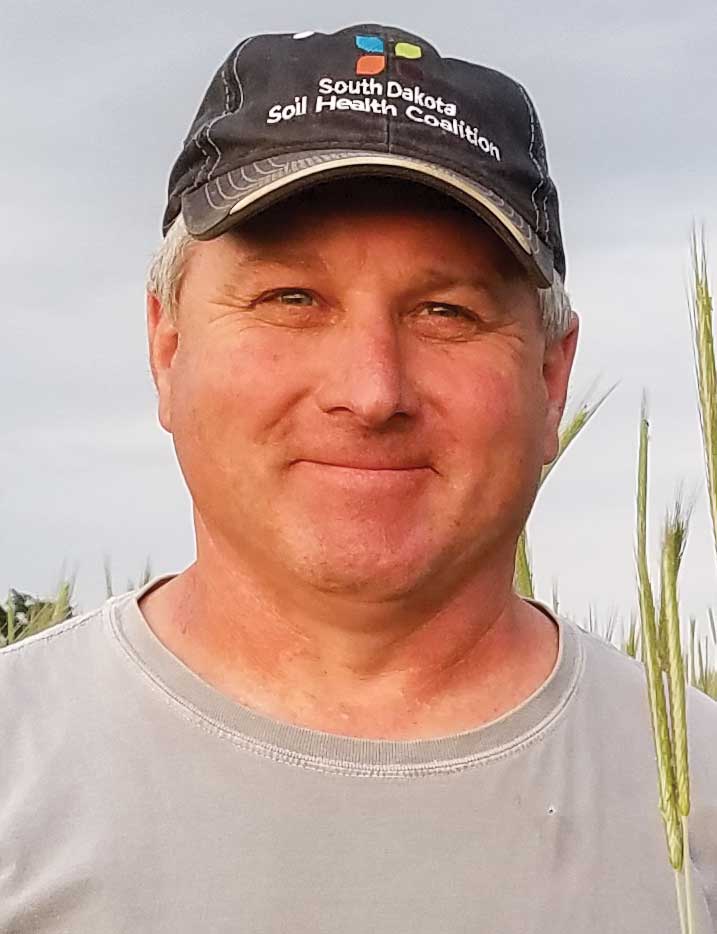 “Adding winter wheat to the rotation was an experiment…” – Kurt Stiefvater

Oats are harvested the first week of August, and covers are planted after that.

“We yield 100-130 bushels per acre with oats, which is 10-15 bushels better than the historical average in our area,” he says. “If it really grows well, and we have a good year, I can sell part of the oat straw for extra income.”

Stiefvater says he experimented with planting flax and oats with a Case IH planter, switching the discs on it for more uniform planting depth.

“We planted 22-inch rows, coming back and offsetting 11 inches for the oats,” he says. “We got good emergence, and we used a lot less seed and had more accurate planting.

“Adding winter wheat to the rotation was an experiment,” Stiefvater says. “It was food grade wheat, hardy enough to meet the necessary specifications for the food market.”

Stiefvater says he wants covers in his program that will provide enough growth to be used for winter feed for his cattle in their rotational grazing program.

Stiefvater manages 600 acres of pasture, renting three-quarters of that acreage from family members and neighbors. He has 9 paddocks where cow/calf pairs graze and utilizes conservation stewardship programs through NRCS.

He has pasture taps or water lines centered in each pasture that makes a pie shape away from the tank for a water source. He uses electric fence to divide up the pasture into equal acres and rotates the cattle so they still have access to water.

Since switching calving from March/April to mid-May and June, he says that mother cows are milking better on the larger amounts of grass available.

Because cows aren’t experiencing their last trimester during the coldest part of winter, calves are healthier at birth. Since they’re not fighting the weather, the cows don’t need such a high requirement diet for a stressful season. He keeps pairs in groups of 10-20 and they’re out on pasture until the grass gets short. In November, he moves them to a cover crop field.

The cattle have seemed to really like the diversity of the cover crops, according to Stiefvater.

“They eat more and it’s easier on the cows,” he says. “Calves get a variety to eat, and I can tell they’re gaining. The cows have better body condition scores. I keep salt and mineral in front of cattle year-round so they get a better balance of nutrition. When the cattle are grazing cover crops, they hardly use any of it.”

Stiefvater notes that in 2020, the fall was dry, so the covers didn’t grow much. Most years, grazing cover crops cuts his hay usage by 40%.

The farm’s soil organic matter was going down before they switched to no-till, Stiefvater adds. He began doing soil testing every 3 years after soybean harvest to track organic matter levels. 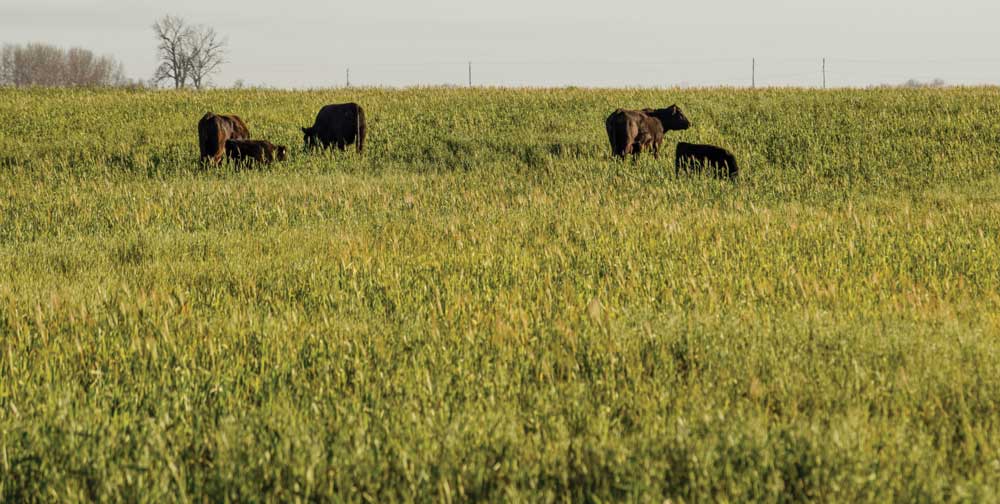 COWS’ PREFERENCE. Because Kurt Stiefvater grazes his covers, he includes more small grains and sorghum in cover crop mixes. He uses an oil variety of sunflowers because even though the seeds aren’t viable, the cows love to eat them.

Stiefvater has a wide variety of soils, from gravel to heavier loam to sand and even higher clay content. Their soil has 6-10 inches of black soil and then turns to clay, so water tends to be held toward the surface.

Before switching to no-tilling, he admitted that he didn’t quite understand the soil and makeup of soils, organic matter levels and nutrients, or the lifecycle of the soil. To boost soil health, Stiefvater likes to incorporate legumes and sunflowers in his cover crop mixes for their taproots that burrow down into the soil.

“I try to have lots of living roots to keep the soil active as long as I can, even after a freeze,” he says.

The cover crops provide protection to the soil throughout the winter, for less blowing soil or erosion from the wind and water. An extra benefit for Stiefvater is the wildlife that flock to the covers as a food source, such as deer, pheasant, and partridge.

“We’re still in transition phase,” he says. “We keep learning more about how different plants interact with the soil and how to manage that. We’re trying to maximize the soil and keep a living root as many days out of the year that we can and incorporating livestock. I really like the soil biology component that cattle traffic stimulation does to the soil, the way the cattle cycle nutrients and spread them across the field.”

Stiefvater says that the soil biology helps his cash crops take off once the plants get rooted.

“I really like having mycorrhizae in the soil, since they help plants capture the nutrients and water in the soil,” he says. “The soil biology needs oxygen, too.”

Stiefvater has seen improvements in the water-holding capacity of his soil. He gives the example of 2020, when there was a dry spell.

“Having that protection with residue and more earthworms and other insects digging around in the soil really helped,” he says. “I like to get out and sidedress fertilizer or spray right after a rain, but I don’t have to worry about getting stuck. The soil can hold the equipment better on wetter soil.”

The improvements he’s seen to his soils go beyond the top layer. Stiefvater says he’s dug soil pits and used a shovel to evaluate his soil and he’s been impressed with the results, as roots are expanding better and there are more places for the roots to grow through earthworm holes.

The South Dakota Soybean Association conducted nematode tests on his property and found that they were way down. Stiefvater seeks to keep improving his soil by increasing organic matter and cutting down on erosion, while not using any insecticides or fungicides.

“When things are all in balance, you shouldn’t have any rootworms or an imbalance of nematodes to treat,” he says. “We don’t use insecticide or fungicide because they might disrupt what’s going on in the soil. Insecticides and fungicides don’t just kill the bad stuff — they kill the good bugs, too.”

Savings That Add Up

Stiefvater says he’s looking for ways to change things up to save money and time. One example of that is selling seed oats, which he says are relatively cheap. He has saved $100-110 per cow per year on extra feed costs.

“If we get hailed out or if it’s too dry and we can’t harvest the oats for grain, we can use them as a winter back up feed source for the cattle to graze or even harvest it by putting it in big round bales,” he says. “It’s a versatile crop. Barley is the same.”

Switching to no-till has already saved Stiefvater a bundle. He says that cutting just one tillage pass has saved $15-20 per acre.