Not Afraid to Experiment with Cover Crops

Deciding on a suitable soil regeneration or maintenance strategy — especially in the summer rainfall regions of Africa — needs a great deal of thought and planning. No-Tiller J.P. Van Reenen tells about his experiences.

The KwaZulu Natal No-Till Club has been operating for 20 years. According to Richard Findlay, the coordinator of the No-Till Club, the importance of using cover crops in a rotation program between annual crops has been receiving much attention.

Cover crops are catalysts in soil regeneration as they increase soil cover, helping to minimize wind and water erosion. In addition, they increase water infiltration into the soil while at the same time reducing evaporation.

Cover regulates the soil surface temperature marginally by increasing soil temperature in the cooler months and reducing it in the warm months. All these attributes make it more pleasant for the essential microbes, insects and earthworms to want to stay and regenerate while maintaining a healthy fertile and productive soil.”

One of their most enthusiastic members, J.P. van Reenen, was only a youngster when it started. He farms in the Bergville District of KwaZulu-Natal and is a no-till enthusiast who does a lot of study and research and is not afraid to try different techniques and systems.

In his own words, Van Reenen shares his story below.

Not Afraid to Experiment

“I’ve been experimenting for 3 years now, concentrating mainly on inter-row cropping. On a center pivot I’ve planted 50 ha. I plant two rows in between my maize, basically a Stooling rye mix, and the Stooling rye has worked the best.

“Other things I’ve planted include clover, which didn’t really work as it came through a bit and then more later in the spring. This year I’ve put a bit of sunnhemp in and I’ve put in some cow-peas as a companion crop.

“I modified my John Deere planter with an APV seeder unit originally. I relocated the fertilizer coulters (double-disc openers) to an extra toolbar. I’m quite happy with how this is working. In the beginning I started with three inter-rows, but the trash was too much for this to handle, it kept clogging up.”

“This year I have extended it so it now plants 16 rows. The rear depth wheels also act as press wheels, but I think I will add a little chain behind the coulters to help cover the seed. Every year I seem to add a bit more refinement. When I originally checked the price of proprietary units the cost was prohibitive, especially as we were just testing theories. So I decided to use available parts to construct our own unit. 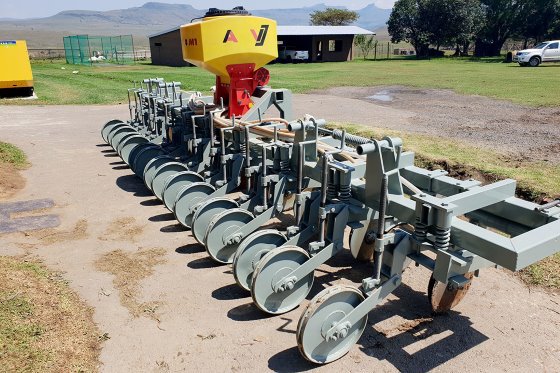 The rear depth wheels of this APV seeder unit also act as press wheels. Van Reenen is thinking about adding a little chain behind the coulters to help cover the seed.

“Last year I left the cover crop in a bit too long, where the cattle where grazing. Sprayed it off a bit late and, with no rain, lost a lot of moisture.

“Timing is critical and heavily dependent on when the rain comes. When the following maize germinated the areas, which had had the cover crop showed signs of moisture shortage. Because of this a lot of people are speaking negatively about cover crops, but you can’t change your farming system because of one bad year.

“Looking at farming 3 years ago I realized the biggest factors are my input costs — chemical input costs in particular.

“My aim in the next 5 years is to try to get away totally from these high inputs. I know that some farmers locally are up to about 300 kilograms per hectare on their irrigated maize, I’ve been at about 220 kilograms.

“This year I’m on about 160/170 kilograms and walking the lands, now that the maize is tasseling, I haven’t picked up any nitrogen deficiency. These lands have had two leguminous crops before on the irrigated lands. Soybeans and then peas in the beans. In the next few years I want to see if I can cut down on fertilizer.

“This year, on all my plant mixes I looked at what I would have spent, rand/hectare on fertilizer; this would have been about R1 800/ha, that would be for nitrogen (N), phosphorus (P) and potassium (K) but it’s not only those elements that matter.

“I understand there are, in fact, about 74 different elements and nutrients but we only rely on 3 and think that’s going to sort everything out.

“When I looked at my soil samples, I found they were all short of manganese, zinc, boron, sulfur and other trace elements. So I took my potassium chloride out to avoid putting chlorine in the soil, and went to potassium sulfate, MAP (mono-ammonium phosphate), manganese sulfate, copper sulfate, boron and zinc sulfate.

“I made a mixture for that same R1 800, which ends up at about 10-22-22. Most people will say that’s not enough, but I’ve been doing it for the past 2 years and I’m still getting good results, and my soil samples where I’m doing the cover crops are good.

“The biggest thing that scared me, was that when I took my soil in for sampling, they reckoned that I needed to put 280 kilograms of MAP over the whole farm.

“I said that’s going to cost me about R2 million, and I can’t spend that kind of money. So, I’m now looking at compost to bump up phosphorous in the soil. I’m looking at the compost route to bring the biological features back.”

“I have a supply of manure from a local feedlot and I put it in piles to make compost and add hay to try and get the carbon-nitrogen relationship right. Initially I will try to spread 5 tons/ha and at the same time I’m trying to increase my earthworm population.

“So I’ll feed compost to my earthworms to make vermicast and then spread 2 tons per hectare of vermicast to give the land more biological power.

“This is where the cover crops come in, you can add organic matter, but you can also create your own organic matter. So I’m trying a lot of things, and in 5 years’ time I may have the whole cover crop rotation right — then I won’t have to rely so much on compost. I just want to use it as stepping stone in the beginning so that I can get my soil to a point where it becomes self-sustainable.

“I have just been through the lands and I think we will only have to spray fungicide once instead of the usual three times, this may be down to the previous cover crop. 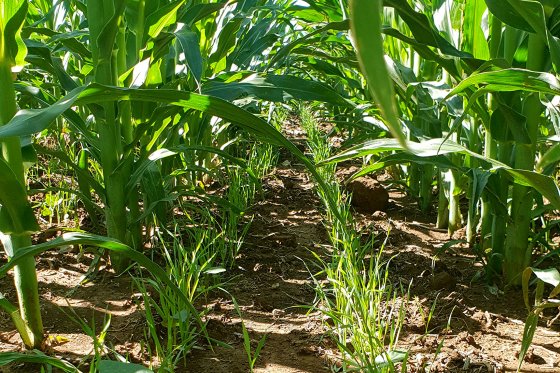 The importance of using cover crops in a rotation between annual crops has been receiving much attention in South Africa, including on the farm of no-tiller J.P. van Reenen.

“After a lot of reading and study online, I’m also thinking of planting a 5-hectare block of maize on 60-inch rows with a summer cover crop in between. We currently plant at 30-inch rows so I’ll block every other row as a trial.

Research in the States has shown a very low yield lag with this type of cropping. I will plant a mixture of cowpeas, sunnhemp and beans, maybe even add some squash. Maybe there is synergy between the roots?

“I may only grow 10 tons/hectare, but if I use less fertilizer and very little spraying it should still show a good return. It will certainly be a more peaceful life that having to jump up and spray all the time.”

Cover Crops: Why Not Give it a Try?