The average No-Till Farmer reader seeded slightly more cover crop acres in 2018 than during the previous year — although the percentage of readers who seeded covers took a slight dip, according to the most recent No-Till Farmer Operational Benchmark Study.

Data shared by more than 400 farmers who participated in the 11th annual survey — an industry exclusive — showed no-tillers seeded 472 acres of cover crops last year. The average for 2017 was 451 acres.

It appears No-Till Farmer readers surveyed for the study are well ahead of the national curve. The 2012 Census of Agriculture reported an average of 77 acres of cover crops seeded per farm in the U.S.

New figures from the Census of Agriculture are expected to be released in April.

To put this in perspective, in 2009 only 40% of no-tillers said they seeded covers. Since then the number of growers seeding covers has grown by an average of 6 points per year.

Anecdotally, many readers shared they had difficulty getting cover crops seeded in time last year due to weather issues and late harvest. The challenges are prompting some of them to look into other seeding methods, such as aerial seeding or interseeding into standing crops.

Cereal rye was the dominant choice as a species in 2018 with 73% of respondents using it, followed by small grains at 50%, radish/turnip at 47%, clover at 38% and annual ryegrass and rapeseed at 26%.

Peas (21%) and vetch (20%) also enjoyed popularity. There was little change in the top species used in 2018 vs. the previous year, with cereal rye, clover, radishes, cereals/oats, annual ryegrass and peas dominating.

Only about 14.7% of respondents were grazing livestock on cover crops in 2018, although based on the interest seen at events and reader data this is likely to increase in the coming years.

When asked when cover crops were seeded in 2018, 76% said fall post-harvest and 22% at harvest (within 24 hours), while 30% did some pre-harvest seeding into crops.

Only 4-5% of no-tillers used a planter, interseeding device or a highboy in 2018. Since 2017, cover crop application by airplane, spreader and air seeder has seen consistent increases.

The timing for seeding cover crops varies depending on the region and weather conditions, according to those participating in the No-Till Farmer Benchmark Study. The majority of no-tillers are seeding covers post-harvest.

The Story by Region

What Type of Equipment Do You Apply Cover Crops With in 2018?

While air seeders are the most popular machine for cover crop seeding in the Northern Plains, drills, spreaders and aerial seeding were also heavily utilized by no-tillers further east. 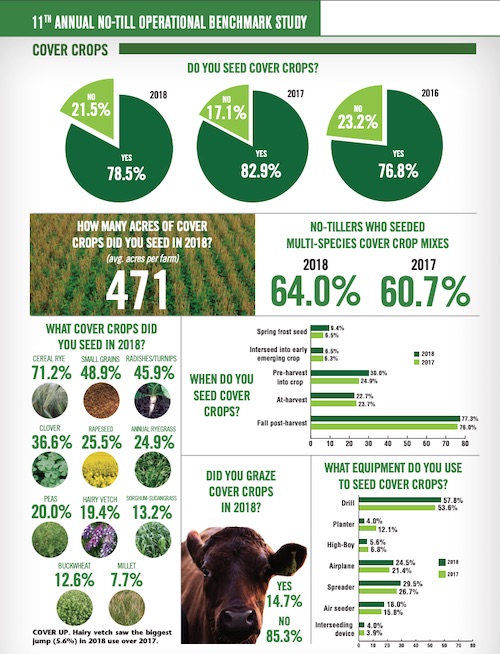