Planting covers into a living cash crop can be a challenge, but many growers are using the right tools to make interseeding work and extend cover crop benefits.

Whether by airplane, spreader or toolbar, interseeding cover crops into cash crops is a trend that appears to be growing in popularity as a way for growers to accommodate weather challenges, increase crop diversity and boost soil health more efficiently.

The Cover Crop Benchmark Study released this year by Cover Crop Strategies details some of the first in-depth data available in the ag industry on interseeding practices for U.S. farmers, including equipment utilized and planting timings that work for growers.

Data show 13.5% of growers in all U.S. regions combined indicated they used interseeding as one of their methods to plant cover crops in 2019, with farmers in the Northeast (15%) leading the way followed by the Great Plains-West (11%), Corn Belt (10%) and Southeast (6%).

The majority of growers who interseeded cover crops into corn last year were in the Corn Belt, and 70% of farmers there interseeded between V3 and V8, or later in the season between R2 and black layer. 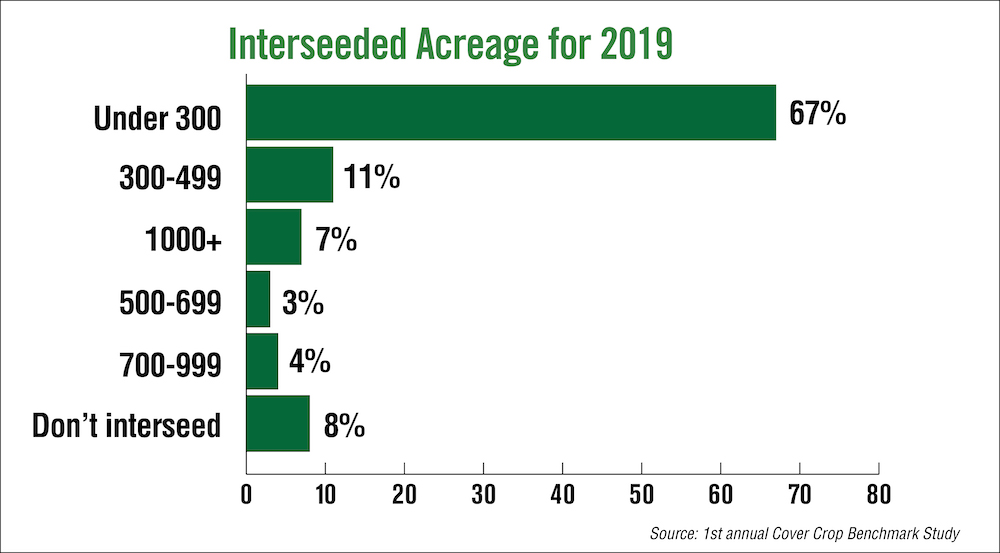 For soybeans, most growers interseeded covers between R5 and R8, with only a handful experimenting with earlier times. The survey did not collect enough data this year to reliably show interseeding practices with cotton.

Data also show interseeding is being done on farms with a variety of equipment, with growers utilizing tools that work for their particular timing or field situation.

For all regions, the leading options were aerial (31%), drill, broadcast spreader and drill (each about 24%), highboy spreader and interseeding device (15% each), and row-crop planter (3%).

But clearly, the favored methods differ by region: Growers in the Corn Belt (45%) and Great Plains-West (31%) had the highest reliance on aerial seeding, while few in the Northeast (7%) used that method. Drills (40%) loomed much larger for interseeding covers in the Great Plains-West than in other regions.

One of the benefits of interseeding cover crops doesn’t have to do with soil health specifically, but building armies of beneficial insects that allow Mother Nature to keep pest populations in check, says Mike Bredeson, a Grove City, Minn.-based entomologist with the Ecdysis Foundation. He says there are bottom-up, plant mediated factors that help plants prevent pest outbreaks, such as plant-induced chemical reactions that help the plant resist a pest or reduce the efficiency of pests doing any sort of feeding.

“In a monoculture system, we’re not providing the right habitat and resources for these top-down predators to consume and check that pest population,” Bredeson says. “In addition, in such a simplified system, the bottom-up plant mediated factors are also absent. Without top-down and bottom-up factors to keep a population at a manageable level, what happens? We get the occasional pest explosion, an herbivore explosion.”

“By interseeding cover crops, we can provide alternative sources of food and build up a persistent population of top-down beneficial predators…”

There are a few different ways to approach interseeding, according to Bredeson. Interseeding can be done simultaneously when planting cash crops, and then harvesting both crops at the same time, separating them later, or in a relay cropping system.

“By interseeding cover crops, we can provide alternative sources of food and build up a persistent population of top-down beneficial predators,” he says. “Even if that predator is disabled, the pest population spends more time and energy trying to avoid being eaten. That results in less time feeding and reproducing. It’s really amazing. When you take it times millions and billions of organisms on your farm, it can make a huge difference.”

When we interseed cover crops we can also help reestablish the bottom-up forces to help resist a pest population.

“When you have a mixed cropping system, the signals a pest receives are confused,” Bredeson says. “It’s much more difficult for the pest to find exactly where it needs to go, and it burns up a lot more energy in the meantime.”

“When we diversify the corn agro-ecosystem with interseeding cover crops, we see predator activity more than double,” Bredeson says.

During work on his doctorate, Bredeson did a trial with three farms. Half of the fields were interseeded with cereal rye, field peas, flax, hairy vetch, lentils, mung beans and oats, while the other half were planted to a corn monoculture. The interseeded cover crops took off, creating a different habitat in which insects could thrive.

Bredeson’s research evaluated the insect community when corn was at the V4 and V8 stages and when the corn was at anthesis, sampling nearly 1,100 corn plants and gathering nearly 300 insect samples from the soil surface. There were more than twice as many insects on the soil surface in the interseeded fields compared to corn monoculture fields.

In states like South Dakota, the typically short amount of time between harvest and the first killing frost is cited as a challenge for cover crop use. But using an interseeder can overcome those impediments because seeds are placed in the soil and not on top after corn and soybean are established enough that cover crops will not decrease yield but before a planter cannot get into the field.

Treatments included no cover crop, a single grass species of annual ryegrass planted at 20 pounds an acre and a grass/broadleaf mix of ryegrass, crimson clover, turnip, and radish planted at 5, 3.5, 1, and 2 pounds an acre respectively. Cover crops were interseeded into corn at the V6-V7 growth stage and into soybean at the V4-V5 growth stage using a high-clearance planter.

The addition of N fertilizer (50-250 pounds) increased mean corn yield 7-33 bushels across the cover crop treatments. Overall, corn yield didn’t increase substantially with added N fertilizer as it would it most seasons. Therefore, researchers weren’t able to calculate an optimal N rate at this site.

This lack of greater increase in corn yield with more N fertilizer applied may have been due to the high winds causing some stalk breakage during the growing season, researchers said. In addition, within each N fertilizer rate there was no practical differences in corn yield among the three cover crop treatments.

Fall Cover Crops: Make a Day in September Worth a Week in October