Pictured Above: SHOP-MADE STRIP-TILL RIG. Myron Johnson invented a strip-till rig with a roller to terminate covers while making strips for cash crops. Blades mounted on the pipe roll down and cut the cover crop in front of shanks that create strips. Rubber closing wheels seal up the seed trench, followed by a set of five rubber tires that are 12 inches tall and 10 inches wide that smooth the soil out.

From an early age farming is what Myron Johnson knew would be his occupation. But dryland farming near Headland, Ala., isn’t easy: retaining moisture, keeping the soil cool and keeping weeds away are constant challenges. Part of Double J Farms’ success can be credited to adding cover crops in 2010 to their strip-tilling efforts.

“We started using cover crops because we wanted to retain as much moisture as possible so crops can take advantage of it throughout the growing season,” Johnson says, noting that increasing soil organic matter is another goal.

Three generations of farmers can be found on both sides of Johnson’s family. His great-grandparents began farming in the early 1900s on a small part of the land where Johnson now grows corn, cotton, peanuts, oats, wheat and triticale.

Johnson joined his father in the farming operation in 1979 after high school graduation. Only 4 years later he took over managing the then 400-acre farm for his mother when his father suddenly passed. It was a heavy burden for the 21-year-old, with a steep learning curve.

“I knew I needed some dependable help to keep the farm going” Johnson says. “So, in 1984, I asked my cousin Eric Tew from Atlanta to come and join me.”

The two managed the farm for Myron’s mother until she retired in 1995. At that time they purchased the farm from her and formed a partnership, J & T Farms.

Tew handled equipment mechanics, while Johnson took care of other areas. The cousins’ partnership was quite successful until 2002, when Tew lost a year-long battle with cancer. At that time Myron and wife, Laura, bought out Eric’s half of the farm and it became Double J Farms Inc.

If You Need It, Invent It

Although the operation has been strip-tilling since the 1980s, it was in 2010 that they converted to a system requiring high residue management (planting cover crops and allowing them to reach full size). This was made possible by inventing a cover crop roller attached to the front of the strip-till rig that allowed them to make one trip in tall residue that flattened the cover crop and made the strips to plant into.

The new strip-till rig replaced four separate pieces of equipment and is used on all crops.

The strip-till machine has a crop roller in the front made from 12-inch pipe. Blades mounted on the pipe roll down and cut the cover crop in front of shanks that create strips. Rubber closing wheels seal up the seed trench, followed by a set of five rubber tires that are 12 inches tall and 10 inches wide that smooth the soil back out.

“We wanted a cover crop that produced a large volume of biomass and needed equipment that would help us make a good seedbed with good seed-to-soil contact,” Johnson says. “Everything is rolling, all pressing the soil back down.

“We didn’t want to use coulters or blades on the rig because we didn’t want to incorporate that heavy residue back into the soil and make it hard for the seed to get that good seed-to-soil contact.

“The rubber tires keep the residue on top of the soil, so when we come along with the planter, the sweepers on the planter can move residue over to plant and not move any soil.”

Johnson got his unique invention patented in 2014 after a 1½-year patent process, which usually takes 3-5 years. Before beginning the patent process, Johnson talked with an equipment manufacturer about the roller, but they were not interested. Eventually in 2012, Johnson made a deal with Kelley Mfg. Co. to produce and sell the roller. 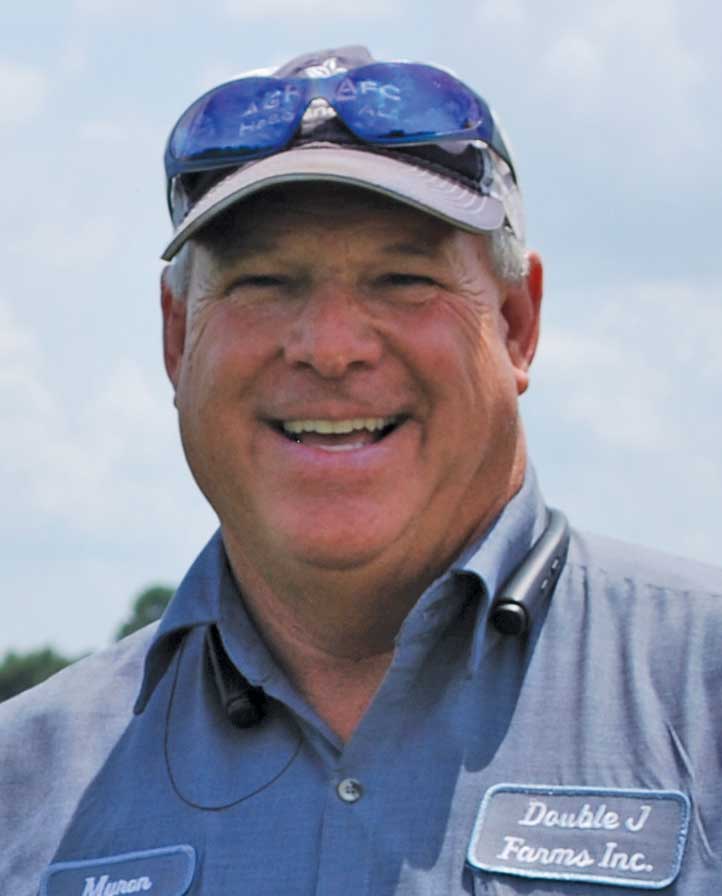 When we started planting covers, organic matter was less than 1%. Now it’s close to 3% in nearly 10 years – Myron Johnson

Double J Farms plants cover crops on all of their acreage. “We’re still experimenting with different cover crop blends and use some blends that have radish and crimson clover,” Johnson adds.

The operation’s primary cover crop blend is tritacle and wheat or oats. Previously it was cereal rye but they were unable to produce enough seed so they switched to triticale because it would produce the needed seed.

They plant 100 pounds per acre of triticale because it produces good grazing in the pastures for the cattle and the most biomass, which converts to organic matter in the crop fields.

“After planting covers for 3 years, we began to see the soil change and organic matter increase,” Johnson says. “When we started, organic matter was less than 1% across the farm. Now, it’s close to 3% in nearly 10 years. Some outlier soil samples have even showed organic matter levels of 5%.”

Properties in the farm’s clay soils have also shown improvement. Johnson says the soil doesn’t tend to harden as much and is much looser. Improvement to water-infiltration rates is obvious as well, as Johnson says he can see this driving down the road past his neighbors’ fields.

“If we get an inch of rain, I drive past my neighbors’ fields who don’t plant cover crops. They’re conventional farmers. There will be water standing on the surface of their fields. It will look like a lake,” Johnson says. “In fields with cover crops, you won’t see any water standing in the field.”

“It was a big change to go from planting rye to triticale,” Johnson says. “I’d rather have rye because it produces the most biomass, but triticale isn’t far behind. It’s got a larger stalk and even though it doesn’t get as tall as rye, it’s a little thicker.”

Because the triticale produces so much seed, Johnson says he now has the ability to plant 100 pounds per acre of cover crop seed — something he wouldn’t do because of the cost if he was purchasing it.

Johnson seeds cover in the fall by spreading seed and fertilizer with a spreader truck and covering the seed with a Great Plains 24-foot Turbo-Max vertical tillage machine.

“All of our decisions are based on the fact that we’re dryland farming,” Johnson says.

Cover crops are terminated in early April with glyphosate, so the soil starts storing moisture before the intense southern summer heat sets in.

Double J Farms started growing cotton in 1989 and the crop has been a great addition to our cropping system, Johnson says. Peanuts and cotton prices usually determine which one Johnson plants more acres of.

Two tons of chicken litter are applied in the fall to give the soil a boost of nitrogen (N) and allow the N more time to break down.

Johnson says the fall is very busy, but in the spring, they don’t spend as much time in the field. Corn is planted around April 16 and cotton is finished up by May 10, and peanuts by the end of May.

The peanuts are also treated 5-7 times (about every 10-14 days) with 1-1½-pints per acre of chlorophalonil, an organic non-systemic fungicide compound, that is applied through a foliar spray.

Corn is harvested at the end of July, and if the weather isn’t too dry the farm may get a second corn crop planted. Peanuts begin harvesting on September 1, and cotton harvest is toward the end of September, often overlapping.

Any corn not used to feed backgrounded beef calves is sent to a local poultry farm for feed. Cotton is sent to the Moseley International Gin in nearby Abbeville, Ala. Peanuts are sold in Headland at a buying point.

“The timing of fall planting for cover crops is the main ingredient to the next good commercial crop,” Johnson says. “That’s where the yield is at. That’s why I am committed to getting cover crops in the ground.”