How to Keep Herbicides from Hurting Your Cover Crop Investment

By Scott Reaver posted on March 9, 2020 | Posted in Termination

While cover crops provide a host of documented benefits, there’s a wrinkle in managing them that growers must learn to handle: herbicide use.

Herbicide carryover has ruined many a farmer’s cover crop plan, although identifying these cases can be tough because the weather, seeding methods or other issues are often blamed instead.

To change this outcome, growers must change their mindset. “To successfully integrate cover crops, you really have to prioritize their establishment,” says John Wallace, a weed scientist at Penn State University Extension.

This ranges from proper time management, herbicide selection, the right seed varieties for both cash crops and cover crops, and even the right seed sizes, Wallace says. And weather conditions play a huge role in carryover.

Wallace cites lack of rainfall during the growing season as the single biggest cause of this problem.

“When we go through periods of drought during the growing season, this increases potential for carryover because we see less plant uptake, so the herbicide doesn’t dissipate,’’ he says. “We see less microbial degradation so microbes are less active.

“But if we have really good soil moisture in good growing conditions after planting and after application of residual herbicides, those are conditions in which we’re probably going to see herbicides dissipate as expected.”

Adoption rates for cover crops vary depending on the region, depending on rainfall totals and other issues. Wallace notes that rates tend to be higher in the Northeast and mid-Atlantic where climates and precipitation are cooperative.

Growers in drier or colder climates, which may have a very narrow window of time for establishing covers, are getting very creative by choosing crops with shorter maturity rates allowing them to move up harvest dates and sow cover crops earlier.

Interseeding in the spring is one way to provide access to more tools or a better environment for developing a herbicide program allowing cover crop seeding while minimizing carryover issues.

More factors are in play during the growing season because the cash crop is still in the ground. If covers are getting injured in the fall 180 days after herbicide application, the interseeding approach could involve applying a pre-emergent herbicide for the cash crop 6-7 weeks before the cover is planted. So 42 or 49 days instead of 6 months is a big difference, he notes. Some growers are waiting until corn is between V4 and V6 before interseeding.

Wallace says some growers are opting for shorter-life residual herbicides for both pre- and post-emergent applications and, as a result, possibly reaping a secondary benefit by improving their odds of controlling glyphosate-resistant weeds.

It’s also critical to know the key characteristics of the herbicide, weeds and cover crops involved, and Wallace says to never use a pre-mixed herbicide when covers are being seeded. Using a variety of herbicides can be part of the solution, but tailor your applications to each situation, he notes. 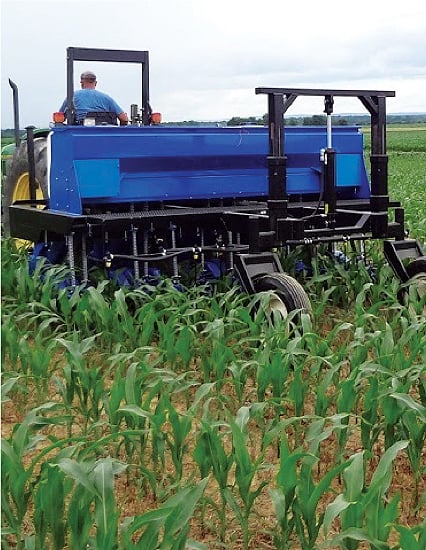 QUICK TURNAROUND. Growers are successfully getting the cash crop out as soon as possible and going back in the field with a grain drill to sow a cover crop. This is especially critical in regions with a short fall growing season.

Growers must also understand the nature of herbicide application rates and when the chemicals will be at half-life or less — and to avoid carryover, the shorter the herbicide half-life the better, Wallace says.

Wallace points out that soil characteristics likely play a role in carryover of herbicides, and he’s seen a greater risk of injury to interseeded covers in regions with lighter soils, such as in the mid-Atlantic area, compared to areas with heavier soils.

Livestock producers have both their own unique incentives and concerns if covers are part of their grazing or hay-production programs.

Allowing livestock to graze on cover crops can be a great way to extend the grazing season as the growth of warmer weather living forage slows down. Further, it can be a bonus source of winter forage to be harvested if the cover crop does well.

It also provides the opportunity for healthier animals, as certain covers are very high in nutrition. The soil benefits from the manure, and certain cover crops can be grazed to termination — maximizing its value to the grower.

Wallace says rotational restrictions are listed on the herbicide label and the restrictions are written with the safety of animal and human consumption in mind. Dairy producers should be especially careful.

A good rule of thumb when planting multiple cover-crop species simultaneously is to always follow the most restrictive rotation interval.

How to Prevent Cover Crops from Failing to Fix Nitrogen

How to Get Effective Cover Crop Termination with Roller-Crimping