Rye More Responsive to Nitrogen Than Other Covers

A winter cover crop can benefit the soil and/or subsequent crop, but cover crops are not harvested for feed or sold as a commodity. Cover crop benefits include soil erosion protection, increased soil organic C accumulation, weed suppression, and soil moisture conservation.  Coarse-textured, degraded soil found throughout the Southeast can be very receptive to these benefits. In general, benefits improve as surface biomass increases, and surface biomass persistence is extended. Persistence is key because hot, humid conditions in the summer speed up surface biomass decomposition.

A four-year experiment (2009-2012) was conducted in Headland, Alabama. Biomass production for oat (Avena sativaL.), rye (Secale cerealeL.), and ryegrass (Lolium multiflorumL.) was compared across four N rates (0, 30, 60, and 90 lb N/ac.) applied as ammonium nitrate. All cover crops were established between the first and third week of November and terminated between the second and third week of April. 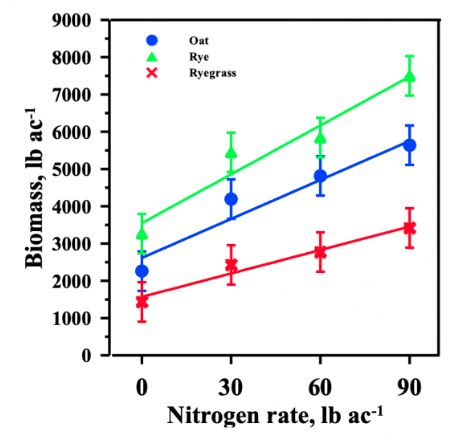 Nitrogen contents were similar between oat and rye but averaged 53% greater than ryegrass. Nitrogen contents ranged from 22 to 67 lb N/ac. (Fig. 2) across species. A C/N ratio >30:1 indicates N release and decomposition from residues will be slow. Rye (55:1) produced the greatest C/N ratio, followed by oat (44:1), and ryegrass (38:1) indicating each species would decompose slowly. The greatest C/N ratio and superior biomass production observed for rye made rye the most resistant species to decomposition. This aspect translates into a longer surface protection period compared to oat and ryegrass. Nitrogen uptake efficiency (NUE) averaged 54% and 57% for oat and rye, respectively. Average NUE for ryegrass was 21% due to low N content and biomass production. 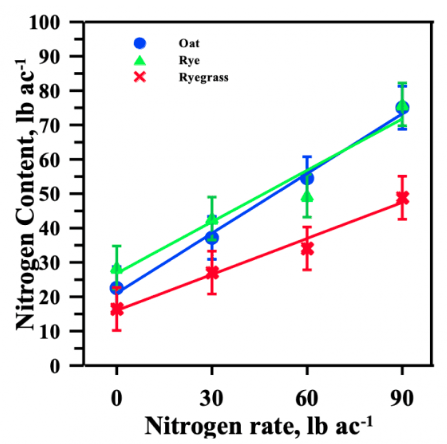 More Than What Meets the Eye