A certified crop advisor and agronomist explains how choosing the right species and promoting its growth can help no-tillers acquire free nitrogen from their cover crops.

Pictured Above: NITROGEN BOOST. Corn planted into a hairy vetch cover crop can expect 45-90 pounds of plant-available nitrogen (N) from the terminated hairy vetch, depending on the amount of growth the cover achieved and when it was terminated. La Crosse Seed agronomist Scott Wohltman recommends growers inoculate the cover crop seed and terminate legumes at the bud stage or early flower stage to maximize the amount of N they fix.

The No. 1 question Scott Wohltman gets asked by growers using cover crops is: How much nitrogen (N) am I getting from cover crops, and when will it be available?

The answer isn’t cut and dry, says the certified crop advisor and agronomist with La Crosse Seed. But in a recent No-Till Farmer webinar, Wohltman explained how much N growers can expect from different cover crop species, what influences the amount of N they fix and release to the cash crop, and how no-tillers can help maximize a cover’s N production.

During the webinar, Wohltman presented a slide that listed several legume cover crop species and the amounts of N they can fix (Table 1).

“You can see a huge difference not only from one legume to another, but also with the range given to each species,” he says. “The obvious reason for this is because there are so many factors at play.”

That’s because the rate of N fixation by a cover crop is directly related to the cover crop’s growth rate, he explains.

“You can assume anything that would take away or discourage how that plant grows would likely take away from how much N is fixed,” he says, such as drought, disease, potash availability and low temperatures.

Low temperatures in particular can be a big influence on a cover’s N production. Wohltman notes that research has shown the optimum temperature for clovers to fix N is somewhere between 55 F and 80 F.

“As we go on either side of that range, the rate declines drastically,” he says.

Because there are so many factors that play into a cover crop’s growth and the amount of N the cover is able to fix, Wohltman says the rule of thumb is to assume only 50% of the N produced by a cover crop is available to the following cash crop. 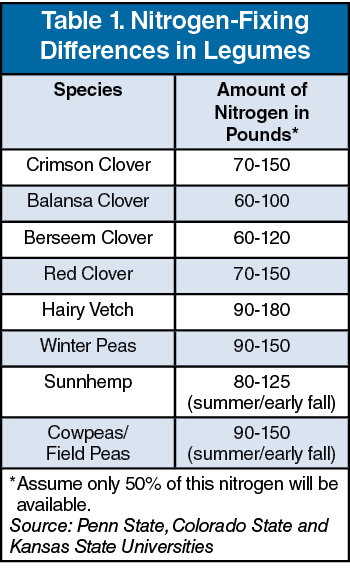 A good way of determining how much plant-available N a cover crop can produce is by looking at its percent of total N per ton of dry matter.

Every 1% of N equals 20 pounds of N per dry matter ton, Wohltman says. So a legume that has 3.5% N in dry matter would provide at least 70 pounds of plant-available N per ton of dry matter.

But the lower the percentage of N in dry matter, the longer it takes for that plant-available N to be released. This is due to the cover’s carbon-to-nitrogen (C:N) ratio.

“Carbon and N relationships control the release of plant-available N,” Wohltman says. “As soil organisms decompose residues from the cover crop, a portion of that cover crop carbon is lost from the soil as carbon dioxide.

“The remaining carbon is transformed by the decomposition process and yields what I call fresh soil organic matter, with a C:N ratio of approximately 12:1.”

The higher the C:N ratio, the slower the rate cover crop decomposition becomes because there’s not enough N to balance out the carbon present in the cover crop.

Wohltman says if a cover has a C:N ratio above 24:1, N will be immobilized. So if the following cash crop requires a lot of N, like corn, then the no-tiller will need to apply additional N to overcome that N deficit.

On the other hand, a cover with a C:N ratio below 24:1 will have more N than what is needed to build soil organic matter, which will result in a N surplus.

But for a cover crop that has 1% N per dry matter ton, there wasn’t any plant-available N at 4 weeks or even 10 weeks after the cover crop’s termination.

Wohltman says this is likely the case for cereal rye that’s heading out. At that time its C:N ratio will usually be 37:1. Whereas if it’s terminated at the vegetative stage, then it’s C:N ratio drops to 26:1. 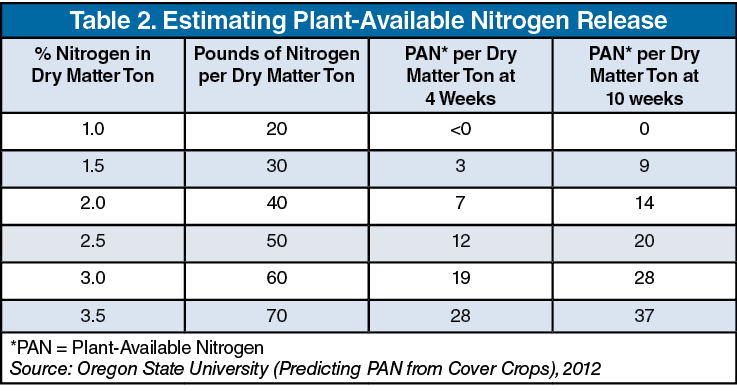 While achieving a lower C:N ratio largely depends on choosing a species with a higher N percent per dry matter ton, when that cover is terminated also plays an important role.

“I think it’s critical to think through crop rotation and understand that when these cover crops are terminated, there will be a drastic difference in the cover crop carbon, and that will dramatically alter how quick those residues decompose and desiccate,” Wohltman says.

To maximize the amount of N available from legumes, Wohltman recommends terminating them at the bud stage or early flower stage. Doing so could provide up to 100 pounds of plant-available N.

“Maybe it was seeded in the summertime and that legume was allowed to flower or get close to flowering; obviously it’s going to have a bigger impact than if you seeded crimson clover in September and it was only allowed to grow for 3 or 4 weeks,” he says.

“If you’re utilizing a legume and the secondary benefit is getting a little bit of extra N, you need to do everything in your power to maximize the plant growth and biomass. Because the more biomass, the further along that growth rate, the more plant-available N we’re going to have for that next crop.”

He adds that if a no-tiller is seeding at a time that won’t allow for optimum growth, it may not make sense to seed a legume.

Wohltman says if a no-tiller really wants to maximize a cover crop’s N production, inoculating the seed is a must.

“Without the correct rhizobia present, a cover crop legume will not maximize N production,” he explains. “If we do not have the proper background population in the soil, we must inoculate.”

But he warns that unlike alfalfa or soybeans, most legume cover crop species do not have a viable option to be pre-inoculated.

“Rhizobia that nodulates alfalfa can survive on seed for 2 years,” Wohltman says. “In many cases, other strains outside of alfalfa don’t last on seed for much more than 24 hours.

“Beware of pre-inoculated cover crop seeds because in most cases there will not be any surviving rhizobia.”

Instead, he recommends no-tillers use fresh inoculants at the time of seeding “because it’s the only way you will ensure the rhizobia will be living and doing what they need to do.”

He reminds no-tillers that the window of time they have in the fall to get their cover crops seeded and established usually isn’t very long.

“The take-home message here is if we don’t inoculate, if we don’t have the proper background population in the soil, we’re going to have to inoculate,” he says. “Anything that we can do to get our cover crop legumes off to a good start I think we should consider, and inoculants are definitely one thing to keep in mind.”

He says a handful of manufacturers produce different rhizobia strains needed by different cover crop species that can be purchased individually, and there are some new products that allow growers to inoculate cover-crop mixes that contain one or more legumes.

The best way a no-tiller can predict how much N a cover crop will provide is by taking biomass samples, Wohltman says.

For more information, watch Scott Wohltman’s webinar, “Maximizing Nitrogen & Other Nutrients in Cover Crop Systems,” on the No-Till Farmer website at bit.ly/nitrogenwebinar. Please note you must be logged in to your online account to watch the replay. If you don’t have an online account, you can register for free at bit.ly/ntfregistration.

A grower can do this by taking a 1-by-1- or 2-by-2-foot frame made out of metal or PVC, dropping it into a living cover crop and harvesting all of the biomass that falls in that square. Repeat that in several different areas throughout the field to get a relative sample, only collecting the biomass that’s above the soil, as the sample shouldn’t have any dirt in it, Wohltman says.

The no-tiller will then weigh it and send it off to a lab to learn what the N percent of the dry matter is. Wohltman says the cost usually ranges from $25-$35 per sample.

“In order to get a real read on where we are, how much N we had on our fields, this is a surefire way to get that done,” Wohltman says. “If you really want to figure out how much N is out there, you really need to take a sample.”