Balancing the supply and demand of nitrogen (N) in crop production is challenging. In most cases, application of N fertilizer is needed to ensure that adequate N is available to corn. Nitrogen that is not taken up by plants can be lost from cropping systems as nitrate through leaching or runoff.

Cover crops can help to manage nutrients within cropping systems. One function of cover crops is to capture available soil N by storing it in their tissues. The period between corn harvest and winter is limited by cool air temperatures and short days, making cover crop establishment following corn harvest a challenge. Interseeding cover crops into corn can increase the amount of growing degree days and solar radiation available for cover crop establishment and growth prior to winter. However, this strategy may raise concerns about competition of cover crops with corn.

To evaluate the effect of interseeded cover crops on N supply to corn in a corn-soybean rotation with spring strip tillage, cover crops were evaluated at Grand Rapids, Lamberton, and Waseca, MN from 2016 to 2018. Cover crops were broadcast into corn at the dent stage. Cover crop treatments included cereal rye (CR) and annual ryegrass (AR) alone, in two-way mixtures with crimson clover (CC), and in three-way mixtures with forage radish (FR). Cereal rye was the only winter-hardy cover crop, and its regrowth in the spring was terminated with herbicide before strip tillage. Annual ryegrass, CC, and FR winter-kill, so they did not regrow in the spring.

Nitrogen fertilization for corn included a broadcast application of urea at 65 lb N/acre at planting, followed by 60 lb N/acre of urea ammonium nitrate solution that was injected into the soil at the six leaf collar stage. We collected weather data, soil samples from the 0-16 inch depth in the fall after corn harvest and after the spring thaw, weekly soil solution during the spring and fall from ceramic suction cups buried at a depth of 40 inches from plots with CR, CRCC, CRCCFR, and no cover crop, biomass of cover crops, and corn grain yield. A mean value for nitrate-N in soil solution was calculated seasonally for spring (March-May) and fall (September-November) by averaging the concentrations collected during each period. 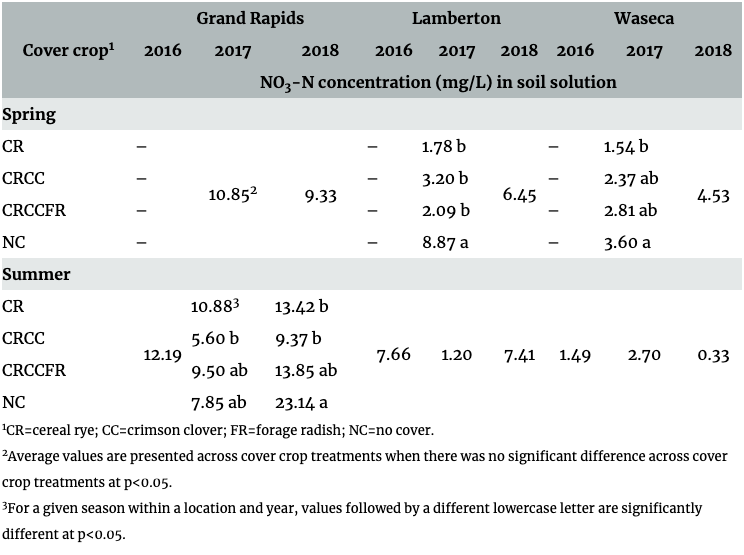