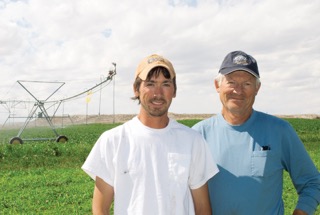 Richard Klein (right) and his son, Garrett, have just begun adopting no-till practices as they raise 480 acres of irrigated sugar beets, alfalfa hay and barley near Midvale, Wyo., in an area that only sees an 3-5 inches of annual rainfall. They’ve also added multiple species of cover crops that are designed to improve soil health.

It’s only been 2 years since first-generation Wyoming farmer Richard Klein and his son, Garrett, stepped into the no-till arena.

While they’re not ready to confirm any major soil or crop improvements as a result, they like the way no-till and cover crops are impacting their soils.

With a scant 3-5 inches of rain annually on their farm near Midvale, the Klein’s area is classified as semi-desert. They raise sugarbeets, alfalfa and malt barley for Coors Brewing Co. They also produce alfalfa seed, raise leaf-cutter bees and a small flock of Columbia sheep.

Irrigation supplies 100% of the Klein’s moisture for crops. They use center pivots, side-roll sprinklers and flood irrigation with gated pipe, and much of the equipment is supplied by T-L Irrigation.

In recent years, the Kleins have reduced spring tillage, substituting a disc ripper for a moldboard plow. However, Richard says the ripper still heavily damaged soil structure and soil biological activity every spring.

Richard started farming in 1979, when pushing paper as a certified public accountant had become very unrewarding. He transitioned into fulltime farming over a 7-year period.

“I chased crops with a return,” Richard says. “At the time, that was malt barley and sugarbeets. I quickly exhausted my soils with that two-crop rotation.”

Adding alfalfa did little to resolve Richard’s soil quality issues. His current rotation is 4 years of alfalfa, followed by barley-beets-barley-beets and then back to alfalfa. His soil organic matter has run at 1% to 1.5% for many years, and soil compaction has been a major issue.

“If you can read, you can learn to do virtually anything,” Richard says. “‘New and better’ is always around the corner, but you have to discover new ides and understand them. YouTube videos may be even better than reading. Seeing is believing.” 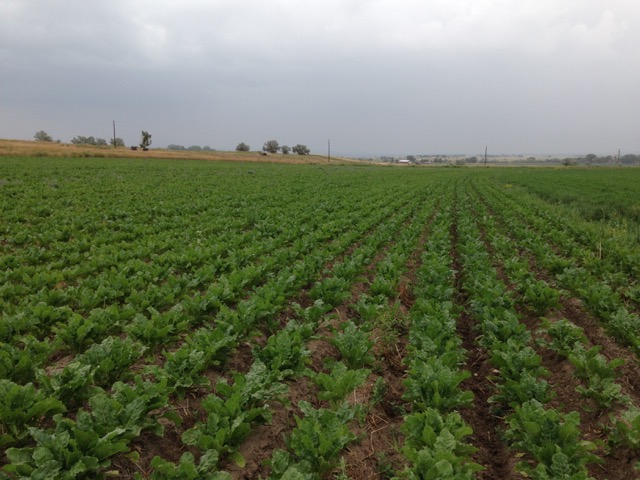 Richard and Garrett Klein’s sugarbeet crop this spring, seeded into cover crop residue. The Kleins had just taken delivery of a John Deere MaxEmerge planter in March and hadn’t made adjustments before seeding their crop.

In 2013, Biltoft brought Garrett a bag of multi-species cover crop (MSCC) seed from Nebraska’s Green Cover Seed and asked Garrett to plant it.

The mix contained forage corn, sunflowers, sorghum, buckwheat, radishes, turnips, kale and some additional plant species. Early in July 2013, Garrett selected 1 acre of land at the edge of a center pivot that could be reached with a few joints of hand-moved sprinkler pipe.

Using a Herd spin seeder, Garrett seeded the mix, at about 40 pounds per acre, and then incorporated it with a harrow.

“We irrigated that acre one time. A few weeks later, we were looking at quite a few species of plants we had never seen before on our farm,” Klein says. “A week or two after the seed emerged, we were also looking at the usual full spectrum of kochia, red root, pigweed, wild sunflowers and lambs quarter. My thought was, ‘That’s that.” But the cover crops kept growing — and blooming.”

The Klein’s watched their cover crop outgrow the weeds. By first frost, forage corn, sunflowers and sorghum towered over the field. Underneath taller forage were buckwheat, radishes, turnips and other plants.

Frost terminated some of the cover, but turnips, kale and radishes thrived in the added sunshine.

“We pasture 1,800 lambs each fall and early winter,” Richard says. “It took them a while to figure out what was in that cover crop, but they made short work of those tender plants. Cows probably would have better utilized the cover crop. But since cows can choke on sugarbeet tops, we sleep better at night with lambs grazing our beet residue.”

In spring 2014, Garrett and Richard inspected the condition of the soil in their cover cropped field. When the crop was seeded, the soil had been hard after not being farmed for several years. It was also highly compacted and had zero tilth, Richard says.

After one seeding of covers, they found the soil was much more mellow. They were eager to test cover crops on a larger scale. 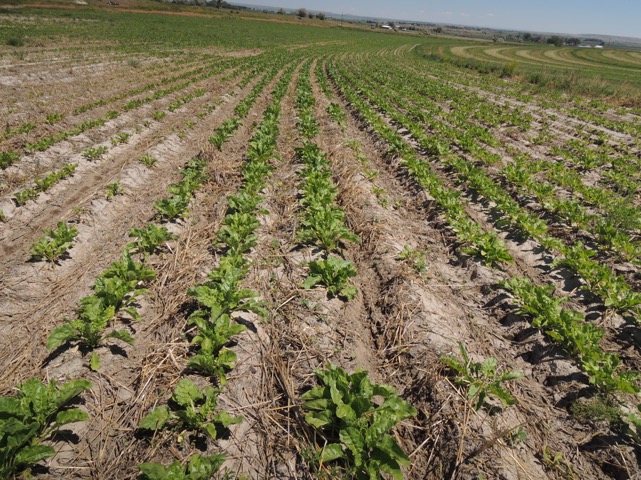 In this field, the Kleins planted sugarbeets into cover crop residue for the first time in spring 2015. While they’re satisfied with emergence, they’re adding no-till coulters in front of the planter’s double-disc openers to help cut through residue.

Last year, the Kleins planted the same multi-species cover crop in five fields ranging in size from 1-18 acres. The planting date and soil preparation seemed to have a significant impact on their 2014 cover crop success.

“With this first larger-scale planting, our experience indicated that the more tillage we did in those first-time fields, the better cover crop yield we saw,” Richard says. “I attribute that to our low level of soil organic matter.

“Soils with low organic matter seem to be easily compacted. In terms of yield, earlier plantings were more successful than later ones.”

The Kleins also learned more last year about how to integrate cover crops into their operation. Lambs grazed the late fall species that continued to grow. A large mule deer population in the Klein’s area — more than 100 animals — also ‘camped out’ on the cover crops.

The Kleins found their most productive multi-species cover crop was in a pivot-corner field with flood irrigation. At planting time, the ridges in the field were still intact.

“There was a lot of trash in the field and we decided to plant sugarbeets on the ridges,” Richard says. “Garrett did re-ridge once to try and remove enough trash from the water rows so irrigation water would flow freely. He also tried to incorporate some dry fertilizer.”

Most soil on the Klein farm is light, and earlier this year, soils were unusually moist at planting time, bringing a new challenge for the Kleins.

The Kleins made no adjustments to their John Deere MaxEmerge planter that had just been delivered in March, and Richard was skeptical about successful plant emergence from planting into cover-crop residue.

When they planted, trash built up on the sidedressing knives, leaving piles of trash in the rows where water needs to flow. While they were satisfied with crop emergence, they have decided to add no-till coulters in front of the planter’s double-disk openers to help cut through residue.

They believe using spoke wheel-type rolling injectors, rather than knives, will improve emergence. The Kleins will also investigate the value of different methods to help increase seed-to-soil compaction for planting next spring.

“Prior to 2015, I used Milton planters,” Richard says. “They’re very lightweight and wouldn’t have handled residue at all. The MaxEmerge is much heavier. In most of the field it did an adequate job getting seed into the ground.”

With an exceptionally wet May that brought frequent rains, the Kleins didn’t need to irrigate to stimulate beet emergence — for the first time since 1983. Their no-till sugarbeet field doesn’t have as even a stand as the minimum tilled fields, but they believe this test is certainly adequate for the purpose of determining if no-till is a viable option for them, Richard says. 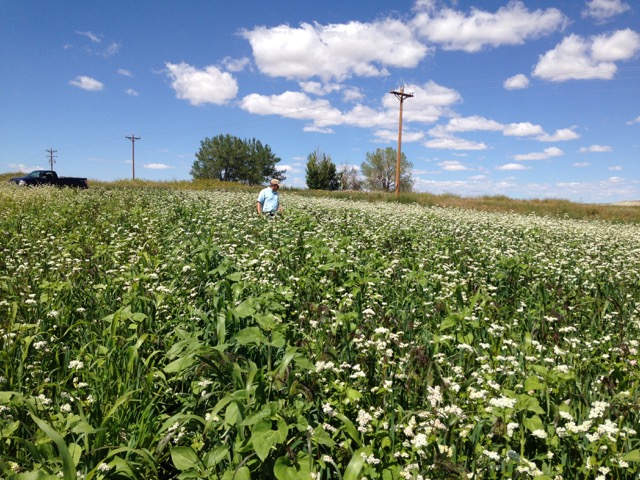 This multi-species cover crop was seeded in 2014 on the Klein farm and yielded ample growth by August. The mix contained forage corn, sunflowers, sorghum, buckwheat, radishes, turnips, kale and some additional plant species.

For the 2015 growing season, the Kleins have a multi-species cover-crop field under a center pivot and plan to plant no-till beets there in 2016.

Their hope is that improved soil quality and less soil disturbance will reduce the amount of irrigation they need.

“We’re on a quest now to return — or perhaps create — soil carbon,” Richard says. “The carrot at the end of that stick is better water infiltration and water-holding capacity. We have a gut feeling we’ll need less irrigation as soil quality improves, although it’s too early to confirm that.”

He notes that lowering irrigation needs would not only save water, but also reduce electricity and maintenance costs for irrigation equipment. Better water infiltration could also eliminate the “stuck-in-the-mud pivot tire” the Kleins are plagued with throughout summer.

“In years past I’ve seen wind-blown sand cut of or burn an entire sugar beet crop in just a few hours,” Klein says. “That kind of catastrophic event has already been minimized with crop residue on the soil surface.”

Richard has concerns about beet harvest. Harvesting equipment digs beets up and soil looks like it’s been tilled. He estimates some 10% of the soil is disturbed by harvest, leaving soil bare and exposed over winter.

“I’m not sure how to keep living roots in the soil over winter,” Richard says. “I know there’s an answer, we just have to find it. We plan to plant some different cover crops late in July or August.

“The trick will be to find a species that doesn’t interfere with cash crop yield, isn’t grazed off by lambs and provides protection from winter windstorms without becoming a spring weed. We’re open to ideas.”

Reaching Beyond Equipment for No-Till Success