The benefits of no-till residue are helping Lamesa, Texas, farmer Jeremy Brown realize more consistent yields as he converts more of his farm from irrigation to dryland management.

Jeremy Brown’s decision to adopt no-till practices stems from an important lesson from his backyard garden.

Brown transplanted this idea it onto the landscape near Lamesa on the Southern High Plains of Texas, where he’s no-tilling 2,600 acres, most of it dryland farming.

Six years ago, while looking in his garden, Brown noticed that when he moved aside the layer of protective mulch on the surface, the soil beneath the cover held moisture, and there weren’t weeds where the mulch was in place.

While he’s still figuring out how to transplant no-till from irrigated to dryland acres, he’s become a passionate no-till believer growing cotton, wheat, cereal rye, sesame, and an array of warm-season cover crops to protect sandy soils and improve yields for cash crops.

“My mission statement is to manage and steward the resources God gave us. If I steward the land, I’ll get a crop,” says Brown, whose farming effort is 65% dryland. “I’ve learned the more biomass I have in my fields, the better we’ll do. Instead of letting the land sit fallow, soil organisms grow better where there is something living present on the soil.

“In a field with good cover, soil temperatures are less and there’s also less stress on growing plants.” 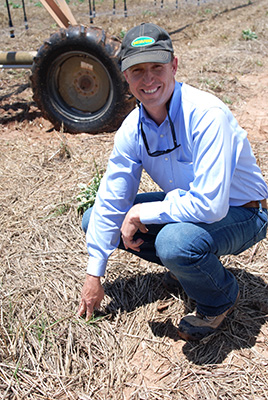 Jeremy Brown is working to gradually transition no-till practices on his irrigated land to his dryland acreage near Lamesa, Texas, in the Southern High Plains. Most of his 2,600 acres of cotton and wheat he raises is dryland. In the background, a sprinkler applies a precise 1/10-inch of moisture to a harvested wheat field, planted to sesame, to encourage germination. Tufts of radishes, used by Brown to eliminate compaction from tractor tires, can be seen in the background as well.

Brown’s path to no-till farming was somewhat indirect. He worked on the family farm as a child and, at age 12, his Dad gave him 40 acres of irrigated land with a side-roll sprinkler.

After graduating from high school he attended Texas Tech University, where he majored in agriculture communications. Post college, he served on the staff of U.S. Rep. Randy Neugebauer of Lubbock for 3½ years, and was away from the farm for a total 10 years before he “got back in” at age 29, tending one farm on his own and working with his father-in-law.

While technology and Roundup Ready cotton dramatically changed farming in this region, Jeremy says the thing that altered his life markedly was when his Dad got out of farming and his world turned upside down.

He noticed that Kermit Shultz in nearby Terry County began rotating cotton and wheat, utilizing the wheat residue for subsequent cotton planting, and the no-till idea for his farm was born.

He began watching the practices of others and reading “lots of articles” on soil health, and the soil and yield improvements of no till that had him interested. In 2012 he did his own on-farm trial with 30-acre comparisons of fallow land, and cover crops of hairy vetch and rye.

“In the next growing season’s cotton crop, you could tell exactly where you got into the ground that had covers — the crop was better there,” Brown says.

Six years into the process now, wheat and cotton are the main cash crops on his farm. Brown harvests wheat, then, weather permitting, plants sesame into the standing stubble, opting for sesame’s ability to go after subsoil moisture with an aggressive root system. 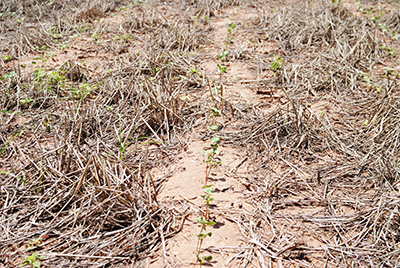 Cotton seedlings emerge in early June amid dense wheat residue on Jeremy Brown’s farm near Lamesa, Texas. With abundant rain this summer, Brown has had problems with herbicide-resistant Palmer amaranth exploding in his cotton fields, a concern for no till farmers in this region.

With the region finally breaking out of a prolonged drought in May and June, Brown had plans in June to fallow wheat ground through the summer, then plant a cover-crop mix of hairy vetch, oats, wheat and rye, radishes, sunn hemp, haygrazer and pearl millet. Winter temperatures are expected to kill some of the covers and leave the ground ready for planting in spring.

Following wheat harvest in a dry year, Brown keeps the stubble clean with applications of Roundup, Gramoxone or Paraquat. He believes farmers must know their cropping plans well to avoid herbicide issues on sandy soils prior to cotton planting the following spring.

In a wet year, after wheat harvest, Brown plants a secondary crop of sesame or grain sorghum. On  sesame he applies Direx over the top at first bloom, and on grain sorghum he uses Husky or Clarity herbicides.

“I love no-till, but herbicide-resistant weeds could bring a problem, and we have to be careful with herbicides in our sandy fields,” he relates.

Brown says if cotton follows a cool-season cover-crop mix, the cover is terminated with 32 ounces of Roundup about 30 days before planting, giving time for drydown prior to planting.

Brown plants wheat and cover crops with a Great Plains 2700 box drill, with opening discs on 8-inch spacings. Wheat is sown in November at 70 pounds per acre on irrigated acres and 30 pounds an acre on dryland fields.

He handles spraying chores with a John Deere 4730 self-propelled sprayer with a 106-foot boom and 800-gallon tank. 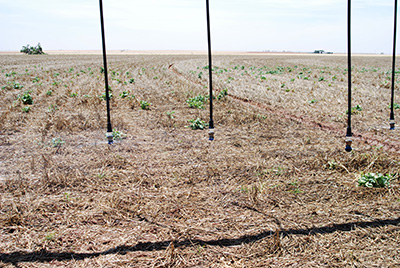 A sprinkler pivot in the foreground on Lamesa, Texas, no-tiller Jeremy Brown’s farm applies a mere 1/10 of an inch of moisture to sesame no-tilled into a field of wheat residue that also includes numerous emerged radish plants.

One of the challenges Brown faces in migrating no-till practices, such as utilizing cover crops, from irrigated acres to dryland is avoiding using up moisture for the following cash crop. Another challenge is dealing with the mushrooming concern over how to control Palmer amaranth that is glyphosate resistant.

The EQIP program through the NRCS has assisted Brown in planting multi-species cover crops.

Brown hails sesame as a drought-tolerant secondary crop behind wheat that is helping to improve soil health. He faces challenges getting the small seed sprouted, and on irrigated acres he’ll apply just enough water with his pivot sprinklers to get the crop going.

He likes to use radishes in fields where compaction might present a problem, particularly where the tractor tires have run in no-tilled fields. In the winter, Brown applies 3 tons per acre of compost to his irrigated land.

“We don’t till in the compost, we just let it break down into the soil,” Brown explains.

One challenge when seeding cover crops on dryland acres is that cotton harvest can run as late as December. Brown has come up with a method to “sling a solution” to this time crunch issue.

He seeds cereal rye over the top in cotton fields in early fall, using a Herd broadcast spreader mounted on a three-point hitch on the tractor, using a rate of 10-20 pounds per acre. If he can get some rain in September, the rye sprouts in the cotton. By cotton-gathering time, usually around October 20, the stand of rye is good enough that it can be driven over with harvest equipment.

“Once the cotton stripper leaves the field, the bare cotton stalks are standing amidst a good rye cover. The land is protected from wind erosion, and the growing cover crop can help to catch and hold moisture,” Brown says.

In dry years, when no spring-planted crop is growing on dryland acres, Brown says a late rain will prompt him to sow haygrazer or another cover and allow it to grow until it winterkills, providing residue to plant a succeeding crop into.

“I believe the reason my yields have been consistent, even with the last several years of drought, is that we’ve had a rotation with high-residue, no-tilled crops,” he says. “Cotton doesn’t like wind, and the residue I’ve been able to leave on the land provide it with wind protection.

“Also, just like in my garden, the residue means the temperature at the top of the ground has put less stress on young plants.”

What I've Learned From No-Tilling: Beating Rain And Taking No-Till To Pasture

What I've Learned from No-Tilling: Breaking Through the Plow Pan, Taking No-Till to New Heights