Using Cover Crop Benefits As a Primer for Cold Cash

Above photo: RIGHT MACHINE. Shenandoah, Iowa, no-tiller Chris Teachout uses this Salford vertical-till tool, with an affixed Valmar 2055 air seeder unit, to seed cover crops like cereal rye in his corn-soybean rotation. He says the machine mimics buffalo hoof action by incorporating seed into the soil without causing too much soil disturbance.

Chris Teachout compares his cover crop philosophy to taking a new gun out on a bear hunt: No hunter uses a new gun on the big hunt without practicing with it first to work out all the kinks.

In the same fashion, Teachout says growers should experiment with cover crops on their own operations, continuously adjusting for increased returns and improved soil health.

Teachout’s 1,800-acre operation near Shenandoah in southwestern Iowa focuses on corn and soybeans, but with a cover crop twist that has not only increased yields but also decreased water and nutrient run-off, hiked up organic matter and substantially reduced nitrogen (N) requirements.

Teachout says cover crops aren’t new to his family, recalling how they aerial seeded in the mid-1980s to provide winter forage for their farrow-to-finish and cow-calf operations. He even remembers reading a 1910 farming guide that recommended interseeding rapeseed, cowpeas or wheat in between wide corn rows.

“We either forgot about these concepts or dismissed them,” Teachout says. “Why did we not stick with that?”

The last of Teachout’s family livestock operations ended in 2006, but he said that doesn’t mean there’s no livestock on the farm. 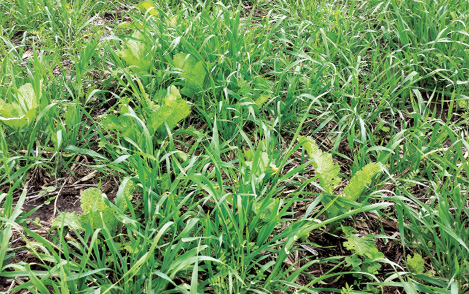 Teachout says attracting earthworms is just part of his objective in using covers to replicate the wealth and diversity of old prairie soils in his area.

He’s also learned to use the right equipment for his farm. He uses a Salford vertical tillage unit with a Valmar air seeder attached to mimic buffalo hoof action by barely slicing and dicing the soil as the covers are seeded.

The final piece, however, is deciphering what cover crop mix will maximize soil health improvement.

“Regrading the soils to build them up — that is my passion,” Teachout says. “We cannot control the weather, but we do have control of seeds and what we put in the ground.”

Teachout says the main reason for seeding covers on his farm is to kick-start microbiological activity in the soil, rather than using them for forager or contract crops. His covers may only be in the ground growing for 35-40 days before termination.

“I want that root action going before putting in soybeans,” he says, noting that barley and oats make up the base of his spring-seeded cover-crop mix.

A day or two before planting soybeans, Teachout terminates the covers with paraquat and Fierce XLT. The early microbial activity sparked by this mix pays off all the way through harvest, with a 4- to 6-bushel bump in observed yields, he says.

Teachout plants mostly non-GMO soybeans, primarily due to the $2-per-bushel premium he receives. He also reported that his food-grade soybeans are yielding 43% protein, compared to an average 34% in his area.

Following soybean harvest, Teachout seeds cereal rye into the soybean stubble. Even in a short amount of time, the rye roots spread quickly.

All of that growth helps keep the microorganisms in the soil active and able to better utilize the winter’s sunny skies.

“All winter long we are capturing that free energy,” he says.

Or he can terminate the cereal rye just a day or two before planting corn, planting the corn crop into a green cereal rye and subsequently fertilizing to compensate for the 2-week decomposition period. To do so, he uses paraquat and atrazine for a quicker kill.

In all, Teachout says he applies about 120 pounds of N for his corn crop, using both a starter fertilizer and a side-band fertilizer. This compares to an average of 170-180 pounds of N typically applied in his area.

Teachout says he’s making progress on further reducing that amount, noting that in one field, the Haney soil health test recommended only 54 pounds of applied N. He admits to only being brave enough to lower his application to 90 pounds, but ultimately would like to reduce added N to 50 pounds for a 200-bushel corn crop.

Teachout is still working cover crops into his corn crop, stacking covers in the rotation by first using cereal rye before planting and then interseeding cowpeas into the corn crop at the V3 growth stage.

Teachout says this “understory” crop helps reduce weed pressure by expanding the canopy underneath and further boosting microbial activity. He emphasizes the importance of “fungal threads” running through the soil, which only need simple carbohydrates from the plants above and consume leftover residue.

In addition to fitting the right cover crops at the right time in his corn-soybean rotation, Teachout also experiments with using covers to build up difficult areas in fields. For example, he once seeded a spring cover-crop mix of primarily spring forage barley and Rockford oats with smaller portions of brown mustard, radish, flax and safflower onto some troublesome clay knobs, letting the mix grow to maturity and then shredding the crop on top.

Subsequent cash crops had more than double the yield in those areas from just that one cover crop cycle.

For Teachout, the benefits of covers extend beyond yield bumps, protein boosts and reduced N applications.

The increased biodiversity has increased organic matter in the soil, as Teachout reports having one-third of the water runoff compared to fields without cover crops. This preserves soil nutrients.

Teachout pegs organic matter levels in fields with cover crops at 5.6% and still increasing, while fields without covers sit at 2.5-3% and have declining organic matter, which is consistent with local trends in topsoil over the past 100 years, he says.

In contrast, the soil aggregates in his softer cover-cropped fields look like “a real, nice chocolate cake,” he says.

Teachout says growers need to keep “digging” into how cover crops and all their related benefits can help reap big rewards. Instead of only driving by, “you have got to get out there with your spade and see what is going on under the soil surface.”

Tips for Using Corn as a Cover Crop