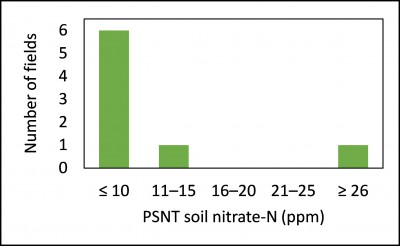 Understanding how much nitrogen (N) your soil can supply to a crop in a given year via mineralization is important from an economic perspective and also from an environmental perspective. In fields where sources of mineralizable N are abundant — high levels of organic matter and microbial biomass and, in particular, fields where manure has been applied — much of the N needed by the crop can be supplied by the soil, which reduces the need for additional inputs of synthetic fertilizers or manure. Performing a pre-sidedress soil nitrate-N test (PSNT) can help growers identify how much N will be available in a given growing season.

Several fields in southern Michigan were sampled for this study. One field (Oshtemo County, sandy loam) had 4,000 gallons of swine manure knifed in this spring and was subsequently chisel plowed, disked and planted to seed corn. Six fields (Kalamazoo County, loam, and Oshtemo County, sandy loam) were previously under a red clover cover crop and one was previously under alfalfa, and all seven were no-till planted to field corn.

Soil samples were taken from the top 12 inches with 20 samples pooled from each field during the first 2 weeks of June (see the Michigan State University Extension article “Identifying Fields and Preparation Work for Pre-Sidedress Soil Nitrate Test” for more details on sampling protocols). In the fields previously under a clover cover crop, the clover did not establish uniformly, so care was taken to sample from areas of the field where cover had been heaviest.

Results are shown in Figure 1. Only two fields received N credit: the manured field had 27 ppm (no further N required, see Table 1) and one field previously in clover had 11 ppm nitrate-N (30 pounds N per acre credit). The high test value for the manured field was not surprising and confirms results from MSU Extension’s George Silva’s 2016 study.

The low nitrate-N results for the clover fields may be due to a late kill of the clover resulting in tie-up of N and low levels of mineralization by the time samples were taken. The clover was sprayed in late April, but was not terminated due to cold weather, and it was not until an early post-emergence (mid- to late May) herbicide application that the cover crop was killed. Although it is possible to lose nitrate-N from lighter soils like these, it was not likely a factor this year as that location received near-normal rainfall from April 1 through June 15 (7.4 inches compared with the 5-year average of 8.5 inches) and there were no particularly heavy rainfall events.

Using the PSNT to inform fertilization decisions, particularly when a reduction in further fertilizer applications is warranted, can seem risky to growers looking to “protect yield.” However, in tight economic times, farmers need to make tough decisions to maximize not just yield, but profit. When cutting back on N fertilizer rates, we recommend including strips of different fertility levels (e.g., including the full N credit, no credit and something in between) and then conducting an end-of-season stalk nitrate test to confirm whether any yield differences might be due to sufficiency of N fertility. Visit the MSU Extension website to find many articles describing the corn stalk nitrate test.