Managing a dairy farm that traces its roots back 170 years isn’t out of the ordinary for Greenleaf, Wis., no-tiller Dan Brick. The fact that Brickstead Dairy is Wisconsin’s 2017 Leopold Conservation Award recipient, however, is a fairly recent development.

Around 2009, Brick decided to convert to a reduced-tillage system by incorporating cover crops, but the results weren’t ideal.

Brick was still seeing huge losses of both sediment and nutrients during that time. The washouts on the Kewaunee silt loam soils were especially brutal on those fields planted with alfalfa, he says.

“We were spending all this money for cover crops and still doing tillage, so we didn’t see the cost benefit,” he says. “The numbers were not coming out.

“Our current land base was too small to justify very expensive equipment. So we invested anything that we had into planters, got rid of all the tillage equipment 3 years ago and switched everything to 100% no-till and 100% cover crops.” 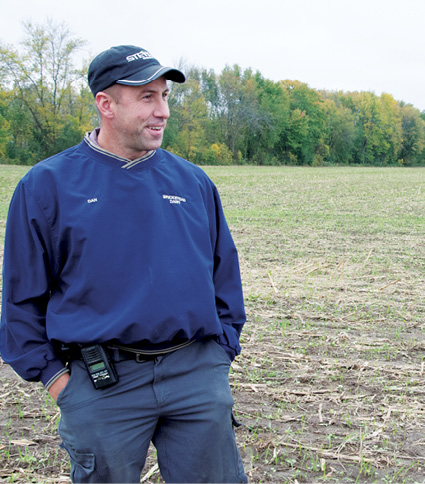 Brick, who started farming with his Dad after graduating from high school in 1992, became part of a traditional 50-cow dairy at that time.

Up until 1996 they grew oats, alfalfa and corn silage like most dairies, but their facilities were depleted, so they expanded to a freestyle barn and began milking 120 cows.

He sees no-till as reducing risk throughout his operations.

Input costs have decreased, which directly impacts the bottom line.

There are also the less-quantifiable benefits from improving soil health, such as moisture retention during a dry year and less compaction or rutting in fields with a wet year.

“Our goal is to keep armor on the soil and make sure our nutrients remain where they are supposed to be,” says Brick. “I did, for example, drop my crop insurance because I don’t have the risk out there worrying about drought or preventive planting.

“I do still take hail insurance, which I did use earlier this year. It’s a smaller input cost saving, but it all adds to the bottom line on an operational basis.”

Another goal for no-till that Brick has is to be able to put up clean feed for his cows.

“Anytime that you’ve got dust blowing around or rain droplets hitting that dirt and basically dirt growing into that plant, there’s a chance to spread clostridium or other things that can affect a cow,” he says. “Once that gets into the silage bunker and gets fed, it can cause health issues with the cows.”

Those health issues or reproductive problems can be difficult to isolate or track, he says, but knowing that a cleaner plant has fewer chances of carrying toxins also reduces risk in the dairy.

“The cleaner that forage is, the better the product is coming out of that cow,” he says. “Our aim is to make sure we have healthy cows and that includes paying attention to their feed, their bedding and protection from the elements.”

The dairy’s crop selection revolves around livestock feed and includes silage corn, alfalfa, soybeans and a smaller amount of wheat.

“We run no more than 2 years of corn on anything. And then we’re going in with alfalfa, which is 3 years,” Brick notes. “We’re planting soybeans if we get into a rotation that occurs after 2 years of corn and we don’t necessarily need the alfalfa ground. We’re throwing soybeans into the mix the third year.”

Rather than selling soybeans as a cash grain crop, Brick has them roasted and incorporated into his livestock feed program.

For corn and soybeans, Brick uses a John Deere 1770NT 12-row planter with Yetter row cleaners and Keeton seed firmers, with the remaining equipment original to the planter.

Brick prefers planting green after taking off a spring forage crop, be that wheat or winter rye. Corn and soybeans are both planted green into cover crops.

“Generally, we’re not waiting for our spring growth to head out, but it all depends on the weather,” he says. “We’ll go in knee-high at about 12 to 20 inches on the rye and roll it down with a roller crimper. Then we’re terminating with glyphosate within a day to 7 days after planting.”

One idea Brick is considering is installing a roller crimper ahead of his corn planter, but he’s still in the process of evaluating the method before investing in the equipment.

Brick currently runs a fluted coulter ahead of the seed openers, but wants to move eventually to a smooth coulter.

“I think it’s tilling up too much soil, which isn’t necessary, as opposed to a smooth coulter,” he says.

Planting rates are 32,000 seeds per acre for corn and 180,000 per acre for soybeans. When planting soybeans, 90% of the crop is seeded with the John Deere planter on 30-inch rows, but Brick is also experimenting.

“For the past 2 years, we’ve planted some soybeans in 15-inch rows with the drill, but we’re still evaluating our returns. Right now, our preferred choice is using the corn planter,” he says.

For smaller grains, Brick has a 15-foot Great Plains drill that is used to plant cover crops and alfalfa. He plants alfalfa at 20 pounds per acre and covers at 35 pounds per acre.

He finds it’s important to have these scales given the different cover crop mixes he’s been using, as they help to save money by avoiding potential over- and under-seeding scenarios.

“We’re mainly looking at our alfalfa and cover-crop seeding rates because we have different seed mixtures,” he says. “If we can get the correct bushel weight, then we’re able to go off of the GPS unit as far as how many acres planted and how many pounds used.

“That allows us to know the rates exactly after our first acre of planting. We’re building a database that enables us to control that seed cost.”

Brick says he has three objectives for cover crops on his farm: increase root structure, enable more moisture retention by building organic matter and fixing nitrogen (N) for the next corn crop.

“Specifically, one goal is to get our soil organic matter levels up over 5% across the farm. Realistically, in my lifetime, in order to get everything to 5% would be pretty good,” he says. “Currently, our baselines have been between 2-3%.”

Brick first planted cover crops in 2009 using radish. Since then, he’s tried various seed mixes from three-way all the way to 12-way mixes. Currently, his cover crop cocktail of choice is a mix of barley, radishes and winter rye.

He seeds covers at 35 pounds per acre, broken out at 11 pounds of winter rye, 3 pounds of radish and 21 pounds of spring barley.

If he’s had early season corn that’s grown through a warm summer, for example, that lets him harvest before Labor Day and plant the three-way mix. But if silage corn is taken off later in September, then he’ll seed cool-season grasses instead.

Another experiment on the horizon is livestock grazing on next fall’s cover crops.

Brick performs genomic testing on all of his herd. With some of the lower-genomic animals, he doesn’t want another dairy cow produced, so they’ve embarked on a program to breed those Holsteins with an Angus.

The Angus breeding produces a beef animal that is better suited to grazing in Wisconsin’s colder climate.

With the first of these new crossbred calves hitting the ground in fall 2017, Brick looks forward to this next spring and definitely next fall when they’ll begin grazing.

“We want them out onto our cover crops to help trample some of that cover down for us, as well as harvest a portion of that crop,” he says.

An early season fertility program for Brick includes applying 5 gallons of 4-10-10 as a starter during corn planting, along with 7 gallons of 32% N in a 2-by-2 placement. 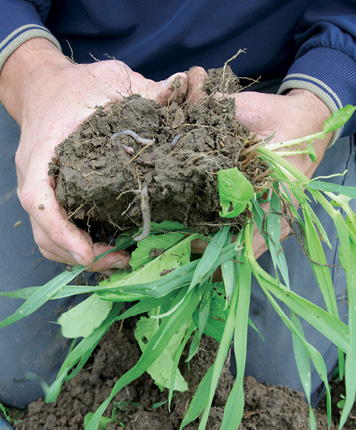 COTTAGE CHEESE SOILS. Although Dan Brick has been no-tilling for only the past 3 years, he’s already noticed the benefits of increased earthworm populations, better moisture retention and less soil erosion.

He uses variable rates on a field-by-field basis, and the tests he uses include tissue sampling and a pre-sidedress nitrate test.

Brick also employs “Haney testing” to keeps tabs on soil health. He especially likes the Haney test’s results because, “it’s basically giving us the amount of biology and respiration that’s going on within the soil profile.

“Where we focus our fungicides is on our brown midrib corn, but we feel that as we improve our soil health, we’re going to be using fewer pesticides and fungicides,” he says.

Brick also makes generous use of the ample supply of manure from his dairy operation. All of the operation’s manure gets pumped into a first-stage, 3-million-gallon concrete basin. This first stage allows the cow’s sand bedding to settle out. Once the sand is contained, the remaining liquids flow into a 9-million-gallon second stage.

“Just in case someone is doing the math, we’ve got 900 cows on 900 acres, which doesn’t come out right, so yes, we do contract and sell manure to other area growers,” he says. “We look to apply 40% of our manure in the spring, shortly after the crops are planted, in order to maximize the nutrient usage. The remainder of the manure is either hauled out in late summer or after corn silage in the fall.”

If faced with wet conditions, Brick will use a low-disturbance manure application that opens up 20-inch rows to achieve proper infiltration.

On one of Brick’s 10-acre alfalfa fields, he’s conducting fall termination tests in conjunction with his local land and water conservation department.

After harvesting a final alfalfa crop toward the end of summer, Brick spread sand-laden manure over the entire field in early September, followed by a cover-crop seeding of barley, radish and winter rye.

Once the cover crop was established a month later, one-half of the field was terminated with dicamba.

“By terminating one side of our field this fall and allowing the other side to continue growing, we will conduct pre-plant N tests next spring on both sides to determine how much N is available for our no-till silage corn crop,” Brick says. “We’ll compare the N release between the spring- and fall-terminated alfalfa.

“The biggest thing about all of this is building organic matter. The more organic matter in the soil, the more we’ll hold onto nutrients and increase water-infiltration capacity ahead of next year’s corn crop.” 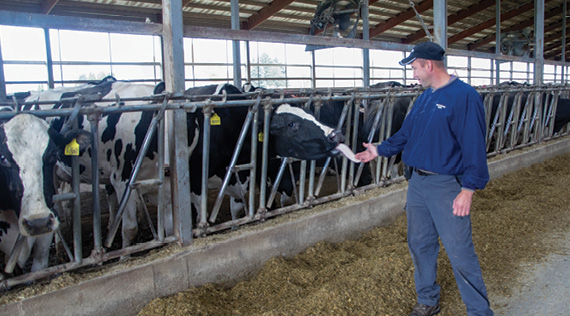 It also includes a comprehensive, long-term edge-of-field monitoring station run by the U.S. Geological Service that is collecting data on the effectiveness of cover crops in reducing sediment and phosphorus losses.

“Through our farm flows the East River, which in turn flows into the Fox River that ends up in the bay of Green Bay,” Brick says. “This represents a large waterway in the area, parts of which run through our farm.”

Aside from running the daily dairy operations, Brick is actively involved in the Brown County Dairy Promotions and Save the Bay organizations.

“Am I playing an activist role in soil conservation? Yeah, a little bit,” says Brick. “We have a lot of dairies in our area. The dairy industry needs to step up its game and make sure that we’re doing everything possible to keep nutrients on the field and not let them into our waterways.”