Cover crops grown after primary crops can reduce costly nitrogen (N) losses by taking up soil N into their biomass. After these cover crops are killed, soil microorganisms decompose their residue, using their carbon as an energy source and their N to build protein. A carbon-to-N (C:N) ratio of 24:1 is best for soil microbes. At higher C:N ratios, such as in later growth stages of cereal crops, microbes will take N from the soil for their growth. This lowers the soil N available to crops. At lower C:N ratios, like those found in legumes, microbes will release (mineralize) N, making it available for crops.

In our study, we wanted to investigate whether the species and age of the cover crop affected the C:N ratio, percent N and total N in the aboveground biomass of cover crops. This research was part of an ongoing cover crop research project funded by the Nebraska Corn Board and Nebraska Soybean Board. 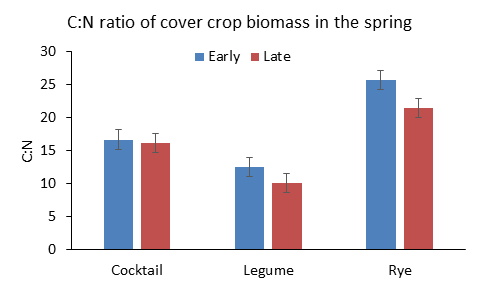 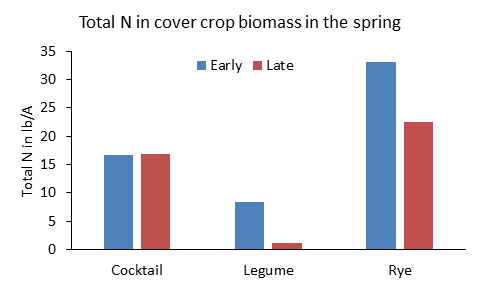 Figure 2. Total nitrogen in various cover crops planted early and late as measured in the spring.

The results of this study showed that legumes supplied little total N because their biomass production was very low. In contrast, rye residue contained a much higher amount of total N because of its high biomass production. Rye took up soil N left by the previous crops, possibly preventing N leaching. The cover crop C:N ratio increases with plant age and was highest for early planted rye. However, it was within the optimum range for C:N ratio, so N immobilization is unlikely to occur. This means the N contained in the rye residue will likely be readily available to the subsequent corn. This study shows that to ensure a N supply, cover crop dry matter must be high. To avoid N immobilization, cover crops should be terminated before their C:N ratio is greater than 24:1, probably in mid to late April for rye cover crops.