Under USDA organic regulations, farmers who shift to organic farming systems must make changes across the spectrum of their production inputs and practices. Organic producers rely on complex rotations, cover crops, and nonchemical practices for pest and nutrient management, such as biological pest management. Practices associated with soil health—including the use of cover crops and rotational grazing—are more widely used in organic farming systems than in conventional systems. Nearly 40 percent of all organic field and specialty crop producers used cover crops in 2014, higher than among conventional producers (7 percent and 11 percent, respectively) in 2012. For livestock, USDA organic regulations require that organic dairy cows and other ruminant livestock obtain part of their dry matter intake, or forage, from pasture during the grazing season, while many conventional dairy operations did not use any forage from pasture as part of their feeding mix. Rotational grazing—managing where and when livestock graze to prevent overgrazing and to optimize pasture growth—is a soil-health strategy that is also used more frequently in the organic dairy sector. In 2014, 65 percent of organic livestock producers used rotational grazing, compared with 22 percent of conventional livestock producers in 2012. 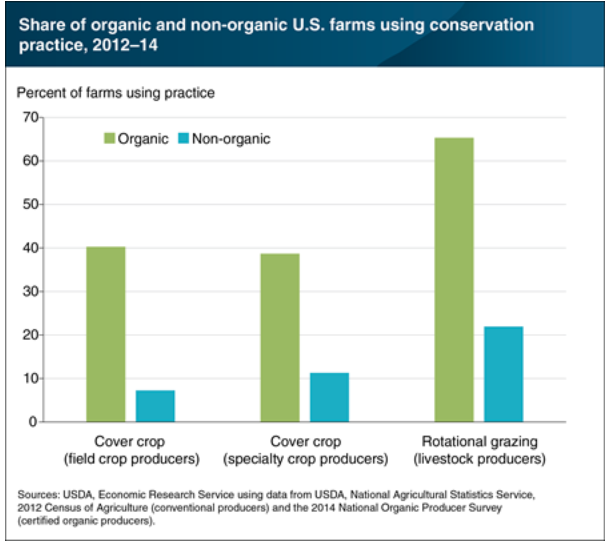