Cattle- and cover-crop-savvy Jake Miller is an innovative cowman in that group. At only 28 he’s part of a Simmental-Angus cow-calf operation in southwest Nebraska in Culbertson. He’s a third-generation rancher who has incorporated no-till programs that are paying off in the rugged rangeland.

When he returned to the ranch from attending Fort Hayes (Kansas) State College in 2013, he bought his grandfather’s portion of the farm and ranch. His family’s operation includes about 4,600 acres of native grass and forage blends.

The family had farmed about 600 acres of corn, soybeans and wheat but converted nearly all that land to grazing the past few years.

“Low crop prices and high production costs led us to switch to 100% cattle grazing,” Miller told attendees at the No-till on the Plains Winter Conference earlier this year. “We sold the combine with no regrets.”

Miller says his family had started an aggressive grazing program about 20 years ago, noting his father and grandfather were very good at rotational grazing. Native grasses that include smooth brome, cheatgrass, side oats grama, short and tall bluestem and switchgrass are part of his system.

They currently run about 300 Angus-cross cows. Replacement heifers are retained and bred to home-raised bulls. They use a May calving program to help make sure there’s plenty of green forage available to support cows and their calves.

Yearlings are retained and enjoy plenty of forage that has been improved by Miller’s extensive cover crop program. Even though his Nebraska location can face harsh winters, cattle graze virtually year around with the forage made available from native grass and a wealth of cover crops, so supplemental feed is rarely needed.

“We want to have a flexible program that provides ground cover year around with plants that provide a living root in the ground as much as possible,” he says. “The program must increase water infiltration rates, maintain a high nutrient-cycling rate and consistently increase the amount of organic matter in the soil.”

Instead of paddock grazing, Miller began a program of using strip grazing, which he says has provided a more efficient use of forage. “We don’t have the trampling loss associated with using larger paddocks,” Miller explains.

As Miller says, the overall program helps him “ranch in sync with nature and mimic nature as close as possible.” He’s can decrease the use of chemicals and applied fertilizer and leave tillage equipment near the barn. The plan helps him maintain a drought management plan and increase his overall cattle-carrying capacity.

About two-thirds of Miller’s grazing program is dryland. Center pivots are used in the other third for supplemental moisture. Miller uses Google Earth software to map out the cover-crop plan, which lets him sit at his computer and specify where to set up fences to get more efficient plant development before he starts grazing.

Oats Mix. The dryland rotation begins in April when an oats mix is planted with a John Deere 750 no-till drill pulled by a Case IH 7130 tractor, which along with a boom sprayer are about the only pieces of machinery used, Miller says. The oats mix is grazed in late June and early July and it also helps break up soil compaction.

In the oat mix, about 45 to 50 pounds of seed an acre is planted. The mix includes Rockford oats, peas, spring barley, triticale, rapeseed, yellow sweet clover and alfalfa. In a typical oat-mix pasture about 40 acres were grazed in 2016. Seed cost was about $18 per acre. With a rate of about 155 yearling steers and heifers, the cost of gain was about 0.54 cents per pound, and the cost was $69 per acre.

In the oats mix and other mixes, total cost is based on rent costs or a percentage of rent based on days grazed, seed cost, spraying cost of $10 per acre and a $15 per acre in drilling costs.

In a 2015-2016 grazing program, 302 weaned steers and heifer calves were placed on 63 acres of winter stockpile in mid-November.

Those cattle were removed in late January and replaced by 155 calves that grazed until April 1. The combined cost of gain was a low 0.41 cents per pound. Combining that with a seed cost of $20 per acre and other costs, total per acre costs were $195 per acre. 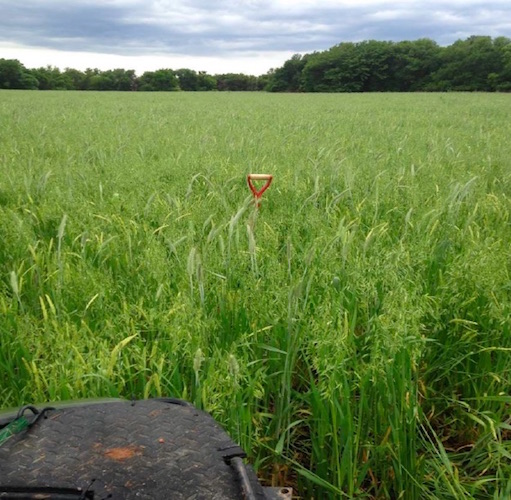 Around April 1, Jake Miller seeds a spring cover-crop mix of oats, peas, spring barley, triticale, rapeseed, yellow sweet clover and alfalfa — along with Rockford oats to help with pigweed control — at a rate of 45-50 pounds an acre. This mix is grazed in late June and early July and also helps break up soil compaction, Miller says.

Rye mix. In late summer, a cool season rye mix is planted that includes cereal rye and hairy vetch, which will produce grazing over winter and into March and through June.

Miller notes that a wooly pod vetch may be more winter tolerant. “These plants have an extensive root system,” he says. “They bring minerals to the surface and improve nutrient cycling. The mix can also help manage kochia weed and pigweed.”

Native range grazing. This system is used by the Millers on and off between cover crops. Cattle are rotationally grazed on native grass, as well as a diverse mix of warm- and cool-season grasses.

A warm-season cover is planted just after winter wheat harvest that includes three varieties of forage sorghum, cowpeas, sunnhemp, sunflower, turnip and radish. Seeding cost is only $2 per acre.

Along with being an excellent source for grazing, Miller says the mix can help break up soil compaction in the top few inches of the soil profile. 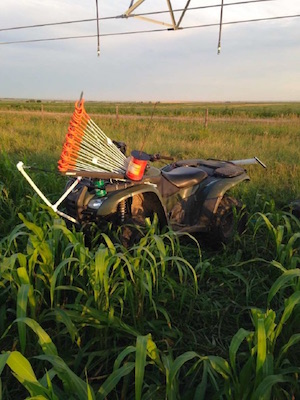 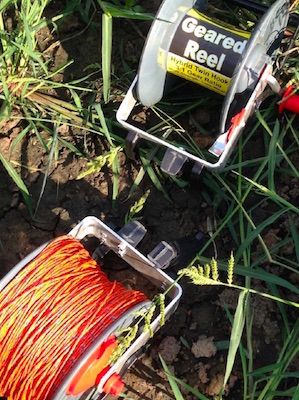 Poliwire, step-in fence posts, an electric fence charger and a good plan are the tools Culbertson, Neb., no-tiller Jake Miller uses for mob grazing. The fence charger keeps the wire hot enough to keep cattle inside the grazing strip. “In many cases we move cattle to a different strip every day,” Miller says. “That benefits their rumen by making the same quality of forage available at all times.”

Miller notes that the average cost of gain for all grazing periods on his farms is 0.55-0.60 cents per pound. “That’s more competitive to putting them in a feedlot, which is in the 0.80-cent range,” he says. “We don’t have them locked up. They’re out grazing. That’s a lot better for animal health.”

Immediate savings on the bottom line are apparent if cattle can be grazed at any time of the year without the need of a supplemental feed. Miller likes to compare the cost of grazing cows on forage sorghum as opposed to growing it to be ground into feed and then fed as a supplement.

Cost for planting and raising forage sorghum, including land rent of $60 per acre, is about $105 per acre. For cattle grazed about 150 days, cost of gain is about 0.70 cents per pound.

If the same ground was used to grow forage sorghum to be ground for feed, Miller explains that by using custom farming data from the University of Nebraska the cost is about $207 per acre, and a cost of gain of $1.06 per pound.

“That’s for ground feed,” Miller says. “It still has to be mixed and hauled to cows, fed and manure hauled back out of the field.”

In traditional grazing programs, paddocks or traps are used. With the Millers’ lush forage system, a strip-grazing system is used to enable easy shift from one area to another.

It can work well with one to several months of grazing, or a “mob grazing” program in which cattle may be on one strip for just a few days.

In the system, polywire is attached to step-in fence posts. An electric fence charger keeps the wire hot enough to keep cattle inside the grazing strip. When a grazing period ends, the polywire borders are easily moved to the next strip grazing location.

“In many cases, we move cattle to a different strip every day,” says Miller, who admits that kind of grazing system management can be intense. “That benefits their rumen by making the same quality of forage available at all times.”

Miller’s irrigated cover-crop rotation resembles the dryland system. The oat mix is planted in April for late June and early July grazing, and a forage sorghum mix is planted in May for grazing in July and August.

Miller says he’s achieved his goals for using cover crops, but knows he can’t go stagnant in his cropping program.

“Early on, we just planted continuous male sterile forage sorghum and grazed it,” he says. “But by coming up with the cover cocktail mixes, it added diversity to our pastures and helped the soil. It provided excellent water conservation. The program has virtually eliminated water erosion in most cases.

“There are many types of cover crops available. We don’t want to get stuck in one rotation. And we plan to accomplish these goals along with increasing our pasture carrying capacity without hurting our gains.”