Several policy modifications have been made this year relative to prevent planting and cover crops due to wet weather and late planting:

RMA typically allows haying and grazing on prevent planting acres which have been seeded to cover crop on or after November 1. The November 1 date has been moved up to September 1. In addition, cover crop acres can be made into baleage, silage, and haylage after September 1. Typically, harvesting cover crops in these manners are not allowed.

As originally announced, the Market Facilitation Program (MFP) program would not make payments in 2019 to prevent planting acres. In a recent news release, USDA indicated that minimal MFP payments may be made on cover crops that have the potential to be harvested.

Recently passed ad hoc disaster assistance legislation may provide additional payments on prevent planting acres in counties declared disaster areas and possibly other areas on a case-by-case basis. The extent and size of these payments are not known.

Species of Cover Crops: The Risk Management Agency (RMA) does not have a list of approved cover crops. A specific species can be used as a cover crop if local experts recognize that species as being appropriate for use as a cover crop. Cereal rye, clovers, and radishes have been used as cover crops and generally would be acceptable species from a crop insurance perspective. Also, crops that traditionally are harvested as grains can be used as cover crops including soybeans, corn, wheat, and oats.

Practices for Planting Cover Crops:  Cover crops, including corn and soybeans, need to be planted as cover crops, and production practices for cover crops may differ from those for grain crops.  RMA does not have a list of planting requirements, instead relying on opinions of agricultural experts. NRCS cover crop guidelines can play a role in determining good farming practices for cover crops.  In addition, RMA has provided some guidance on qualified experts for making good farming determinations.  Approved experts by RMA include individuals who are:

Use of Cover Crop: There are additional regulations associated with cover crops when those cover crops will be used as a forage. Timing is important when the cover crop will be hayed, grazed, or made into silage or baleage.

September 1 and Grazing or Harvest in 2019: In a typical year, grazing and haying can occur on or after November 1. For 2019, however, the Risk Management Agency moved the date from November 1 to September 1 and cover crops can be grazed or hayed, as well as made into baleage or silage, if these actions occur after September 1. Making corn silage from a corn cover crop is allowed. Moreover, RMA allowed cover crops to be harvested as haylage or baleage in 2019.

Cover crops cannot be harvested for grain in 2019, or any other year. Harvesting grain from a cover crop causes the cover crop to be treated as a harvestable crop for crop insurance purposes and will result in a reduction in the prevent planting payment. If the crop was planted in the late planting period, the prevent planting payment will be eliminated. If the crop was planted after the late planting period, the payment and insurance premium will be reduced to 35% of the original amount. 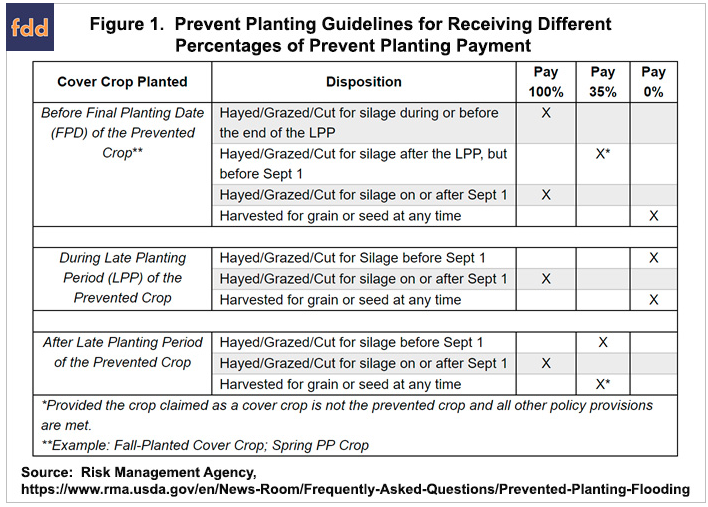 Two other sets of regulations can have impacts on the use of species as cover crops. The first is the Market Facilitation Program for 2019. Originally, MFP payments in 2019 were only going to be made on planted acres. Prevent plant acres were not to receive payments. In a June 10 press release, USDA announced that there may be “minimal” MFP payments on cover crop acres that have “the potential to be harvested.” To date, USDA has provided no further clarification about the definitions for “minimal” or “potential to be harvested” nor has USDA provided any further guidance on these matters. Importantly, the possibility of MFP payments does not impact the crop insurance regulations related to prevent planting payments listed above.

The Economics of Cover Crops in Grain Systems

Prevent planting farmland likely will have expenses including tillage passes, pesticide applications, and mowing. University of Illinois Costs of Operation publications indicate a field cultivating pass has a cost of $9.80 per acre and mowing is over $20 per acre. One pesticide application likely has around $15 per acre in costs. Without the use of cover crops, at least two passes may be needed, placing weed maintenance costs over $20 per acre.

Costs of cover crops include the initial seed costs and planting costs. Seed costs usually are at least $15 per acre and can easily exceed $20 per acre. Planting costs are typically between $13 and $18 per acre, leading to total costs for a cover crop in the $25 to $40 per acre range. Use of bin-run seed, if allowed by patent considerations, could reduce those total costs. However, cover crop seed planting costs could increase if a pesticide application or tillage application is needed to control weeds before planting the cover crop.

The Economics of Cover Crops as Forages

Needs for forages by livestock farms will likely dictate management practices and choice of cover crop species. Note that corn can be used as a cover crop, and corn can be harvested for silage after September 1 while receiving the full prevent planting payments in 2019.

Those farmers who will hay or graze cover crops need to wait until September 1, otherwise prevent planting payments will be reduced or eliminated.

Time Running Out to Use Cover Crops on Prevent Plant Acres