A researcher from Southern Illinois University-Carbondale sought to find a cover crop that was an effective weed suppressor, but also supported floral resources for beneficial insects.

Farmers are always talking about weeds. Whether it is through herbicides, cover crops, irrigation or no-till, the conversation usually focuses on key ways to suppress and reduce weeds from taking up valuable landscape. With an estimated 1.6 billion dollars lost every year to weeds, the problem involves every farm.

Yet, while so many are busy killing off weeds, many of which are native, one Southern Illinois University Carbondale researcher is making a case that certain weeds could bring more good than harm. 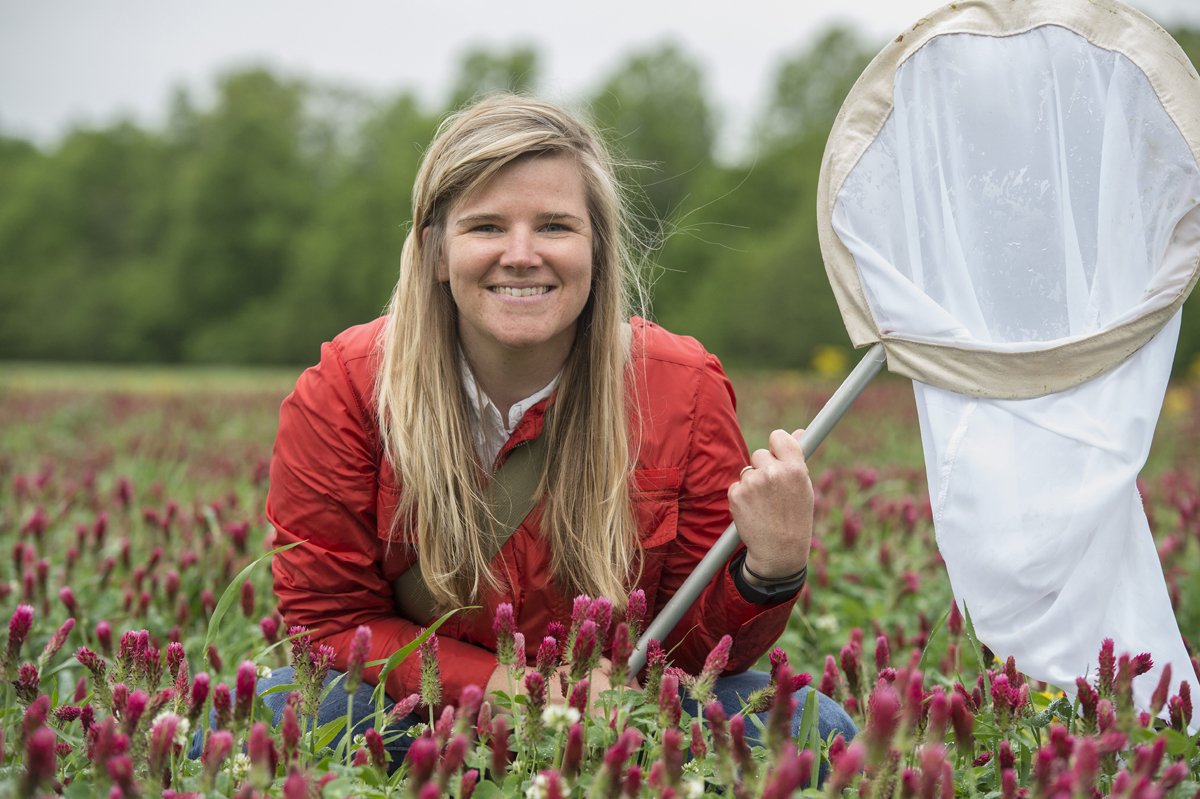 Looking for both weed suppression and pollinator development

Casey Bryan, plant biology masters student, came to SIU to solve a specific question about pollinators at the Crab Orchard Wildlife Refuge. Working under the guidance of Karla Gage, assistant professor in both the colleges of agricultural sciences and science, the team embarked on a study in 2016 that concluded this spring.

The goal was to find a cover crop that worked as effective weed suppression, but also supported floral resources for beneficial insects, such as bees, butterflies and flies.

“I was really interested in the use of cover crops in a growing season rotation to see their benefits for weed suppression and supporting pollinator communities,” Bryan said.

The general idea with cover crops is for farmers to plant them during fallow periods, for Bryan’s research they were planted in the fall, and then grew over winter and into the growing season. Potentially those cover crops can out compete many of the weeds, Bryan explained.

“The cover crop will also provide floral resources for pollinators,” Bryan said. “Hopefully by suppressing the weeds, the farmers can apply less herbicides on the landscapes, which can be damaging for the health of pollinators.”

The research was conducted with the help of the cooperative agriculture program at the Crab Orchard Wildlife Refuge, specifically working with the cooperators who farm on the refuge land.

Prior to the study, winter wheat was the cover crop of choice, planted in the fall and remaining in the field until a cash crop was planted, or through the growing year if it was scheduled to be in fallow rotation. However, while the cereal grain worked as a cover crop, it offered little to pollinators.

“As a national wildlife refuge, Crab Orchard was interested in understanding the status of local pollinators and how they might be able to tweak management strategies within their farm plan to benefit them,” Bryan said.

Pollinators include all sorts of beneficial insects, including bees, butterflies and flies. The initial goal was to switch out the winter wheat with different clover species to benefit the pollinators and still help with weed control.

The researchers coordinated with the farmers and randomly assigned a cover crop to each field. They then contracted with one company to plant all of the crops across the fields, allowing for extra control during the experiment.

The team used a hydrologic pesticide sprayer rigged with hydrologic hoses to aerial spray the clover seeds over the standing bean crop. The farmers came after the clover treatment and harvested their beans, which allowed extra sunlight to hit the seeds and establish the clover crop over the winter period.

While the cover crops were beneficial for the pollinators, Bryan’s research uncovered a surprising discovery.

“The clover we worked with was found to be important as a floral resource (providing both nectar and pollen), but we also found that many of the early winter annual ag weeds, many of which are native, are in some cases just as important as the clover,” Bryan said.

Bryan and her team determined the importance of having some sort of crop in the field over the winter greatly helped the pollinators, with clover seeming to be a better benefit than the wheat for pollinators. However, what was surprising for the researchers was how the pollinators responded to the common agriculture weeds that grew in the fields.

“What we didn’t expect to find, was that a lot of these early winter annual weeds turn out to be very beneficial for pollinators,” Bryan said. “So if farmers are able to prolong their spraying and allow some of those early winter weeds to flower, they provide really important floral resources for the pollinators.”

Categorizing and evaluating the pollinators

To conduct the research, the team analyzed both the weeds and the pollinators. Following the planting, the researchers went out three separate times to collect vegetative data, including the composition of the weeds in the fields and at what percentages they occurred.

Over six additional survey periods, the team used nets and traps to collect bees, butterflies and flies, the beneficial pollinators. Some pollinators have an early flight season in the spring, while others are more active in the summer and fall. The team went out every two weeks to gather a new sample to be able to capture seasonal variation and turnover.

Once gathered, the pollinators were pinned and labeled at their SIU lab, and have been curated into a full museum collection to identify the many unique species.

While bees are the gold standard of pollinators, other insects such as butterflies and flies serve important functions in pollination. Due to time restraints, Bryan mostly focused on the analysis of her bee data, finding over 100 different species of the small insects.

“Once we had identified all of our bee specimens, we were able to compare our bee data to our weed communities among cover crop treatments.” Bryan said.

We selected the clover for the cover crop treatments to include early, mid, and/or late blooming species. Not surprisingly, the treatment that combined the early, mid and late clover supported the most diversity in bee species.”

Choosing a Cover Crop to Protect the Soil

Follow the Rules When Planting Oats as a Cover Crop