Leaving the Comfort Zone for a Greener No-Till Future

Allen Below’s 7,000-acre farm in southeastern Missouri is undergoing a rapid transformation with the help of no-till practices, aggressive cover crop adoption and elimination of tillage.

Pictured Above: GOING BIG. Allen Below is rapidly converting his 7,000-acre farm in southeastern Missouri from conventional tillage to no-till, seeding a majority of them to cover crops and planting corn, soybeans and cotton into them in spring.

For the last few years, Allen Below has been working on a learning curve, but he’s moving toward a day where he’s reduced or eliminated irrigation, restored his farm’s soils and is enjoying a better balance sheet.

Below and his partner brothers, Justin and Austin Littleton, began no-tilling their 7,000 acres of corn, cotton, rice, popcorn and non-GMO soybeans in 2014 near Parma in the Missouri Bootheel. They also began seeding cover crops the same year.

Below had been using a conventional/modified ridge-till system with a minimum of three trips across the field, and as many as six if fields were in poor condition, to get the beds ready.

So far, Below estimates he’s saved as much as $102 per acre by switching to no-till, which is helping to pay for his cover crop seed. It cost him up to $17 per acre alone for each tillage trip. He wants covers to do the tillage for him.

“Even though it’s pretty flat here we do get some soil loss,” he says. “When it rains a lot you see muddy water running down the ditches. We want to improve soil health, improve water infiltration and water-holding capacity, and grow our own nitrogen (N). The only way to make cover crops work well was to go to no-till.”

Below and his partners wanted to see if cover crops would also help them on their heavier clay soils. In fall 2014 they planted 1,500 acres of cover crops with three different mixes that included oats, hairy vetch, daikon radishes, turnips, Austrian winter peas and buckwheat.

The covers went in after popcorn harvest and also into standing soybeans. The fields were planted in 2015 to either popcorn, cotton, milo or soybeans.

Below had so much success planting cash crops into killed covers that spring that he seeded 6,000 acres of covers in fall 2015, believing the whole-hog approach would be easier than managing two tillage systems. 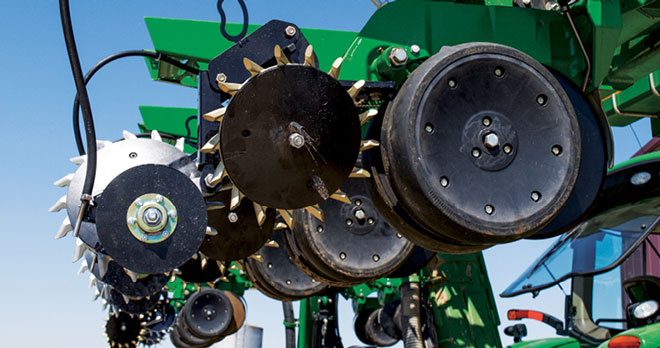 That year he seeded annual ryegrass or cereal rye, radish and vetch on all acres, and added dwarf Essex rape on some soybean acres where nematodes had caused problems. While some of the cover germinated well, the radishes were seeded late and didn’t germinate properly before winterkilling, and hairy vetch seemed to die out in flooded fields.

Below says he’s been using annual ryegrass even though local universities have advised farmers to avoid it. He’s had some minor difficulties killing annual ryegrass himself, but that isn’t discouraging him from possibly expanding its use due to the biomass it provides.

There is a lack of knowledge of using the grass in certain areas, he says, because there are so many varieties and not everything is suited for every climate. Below has worked with retired University of Illinois Extension agronomist Mike Plumer to get his cover-crop program started.

“Knowing what to plant and where you are in the country is critical,” he says.

This fall, Below seeded mostly cereal rye, oats, hairy vetch and radish, but in some fields mixed in annual ryegrass and clover in place of cereal rye and oats to get the carbon-to-N ratios in the desired range and facilitate biomass breakdown.

“There were several fields that had a big biomass of cereal rye and annual ryegrass, and by the time we were harvesting we still had a mat on the ground,” he says.

Below has had cover crops seeded with a spinner spreader, airplane and drill and is still working to devise the best long-term application plan. He says aerial application works best to get radishes seeded into standing corn, or a layer-harvested crop like cotton.

Spreading annual ryegrass seed via airplane has proved to be difficult, he notes, because of the lightweight seed. He’s found using a drill to seed covers is more precise, uses less seed and produces better stands.

“With an airplane, rainfall plays such a big part,” Below says. “We’ve had covers that we flew into cotton where the seed laid there for 45 days before it rained and then came up. With a drill we’re able to get the seeds into moisture.”

Going Green. As if no-tilling and seeding cover crops in the same year isn’t enough of a challenge, Below also decided last spring to start planting corn, soybeans and cotton into terminated green cover crops.

“You take a guy who’s used to planting in ground that looks like lettuce bed vs. walking out on plants that are waist high on me — that’s a big leap,” he says.

Below terminates covers along with his regular spring burndown application, saving another pass over his fields, applying glyphosate and either 2,4-D or dicamba, and sometimes adding a shot of Gramoxone right at planting to kill any straggling plants.

While planting into living covers went well overall this spring for corn and soybeans, Below says a lot of his cotton was lost due to unseasonably cool and wet weather in May that turned terminated cover crops into a “wet carpet” at planting.

Variation in ground cover was another issue, Below notes. Spots where covers were shoulder high caused seeding to be shallower, and areas where cover was only about knee high produced less ground cover and allowed seeds to go deeper.

His replanted cotton emerged, and even as the weather turned warm and dry, Below says he was able to go longer between irrigating, and no-till is the likely reason.

Below is also identifying which planter setups work best for no-tilling corn, popcorn and cotton into covers. Cotton has been especially challenging, he says, because it isn’t seeded 1½-2 inches deep like corn.

He hopes using cover crops will help alleviate crusting issues in his soils and allow him to no-till cotton a little deeper to improve seed-to-soil contact. Closing the seed trench has been a major challenge with the new no-till system.

This spring he used two John Deere planters with Zipper closing wheels from Schaffert Mfg., along with Schaffert’s G2 system for 2-by-2-inch fertilizer application near the furrow. 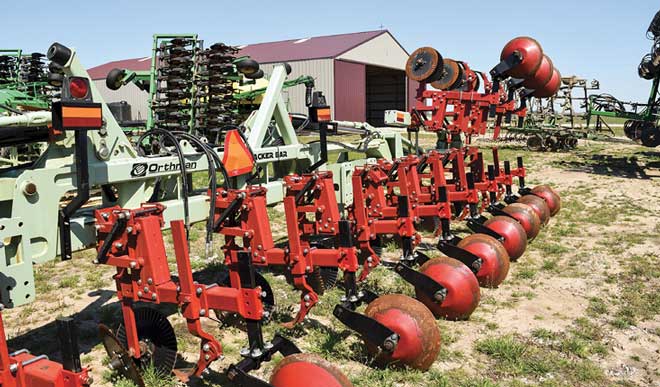 LESS IS MORE. This former Orthman Mfg. toolbar has been repurposed as a “Furrow Runner” implement that cuts V-shaped grooves in the soil to allow irrigation water to flow to crops, reducing soil and residue disturbance on Allen Below’s no-till corn, cotton, rice, popcorn and soybean farm near Parma, Mo.

Below says the Zippers were a “huge, huge help” in getting the seed trench closed in tough conditions this spring, especially with cotton. “It took out one of the big questions marks in my mind on how do we plant into this stuff.”

He isn’t planning to use row cleaners on the units, believing disc openers will be sufficient to slice through cover-crop residue during planting. But if he goes to killing covers earlier and ‘planting brown,’ he may add row cleaners.

“I don’t want to disturb the soil,” he says. “I would like to be able to set them in there, just brush that cover crop residue on top out of the way for cotton, and go in and plant before we’ve exposed where seed is at. It would help.”

Below is also revamping his irrigation program to reduce dependence on the practice and keep cover crops in the rotation.

He uses a “Furrow Runner” implement to cut V-shaped grooves in the soil that allow irrigation water to flow to crops. Fashioned from an Orthman toolbar, the machine includes coulters out front that push and rake cover crop residue out of the way.

Below usually runs the Furrow Runner in corn in mid-May, soybeans near the end of May into July and cotton in late May or early June. His plan is to let the unit help get water into the fields and let cover crops work the soil, with the only disturbance to plant row crops.

Below believes he is seeing some benefits with no-till on his irrigated ground in terms of water absorption and improved utilization of precipitation. He estimates irrigation use has been cut by 10-20% so far with both no-till and the new irrigation method.

“I think we will see headway there, and we’ve also got to learn not to irrigate just because our neighbor is,” he says. “Our re-planted cotton wasn’t showing any sign of being stressed this year while others were very drought stressed.”

Piecing Together a No-Till System from the Ground Up