May 29, 2019 | Posted in Seeding Practices
Source: University of Nebraska — Lincoln

An increasing number of growers are integrating cover crops into their cropping systems with goals of reducing erosion, increasing soil health properties, adding/capturing nitrogen, grazing livestock or aiding in weed suppression. Cover crop establishment after corn and soybean harvest can be challenging with mixed results. Thus, an increasing number of growers have asked about the potential for interseeding cover crops (Figure 1) into an established crop. 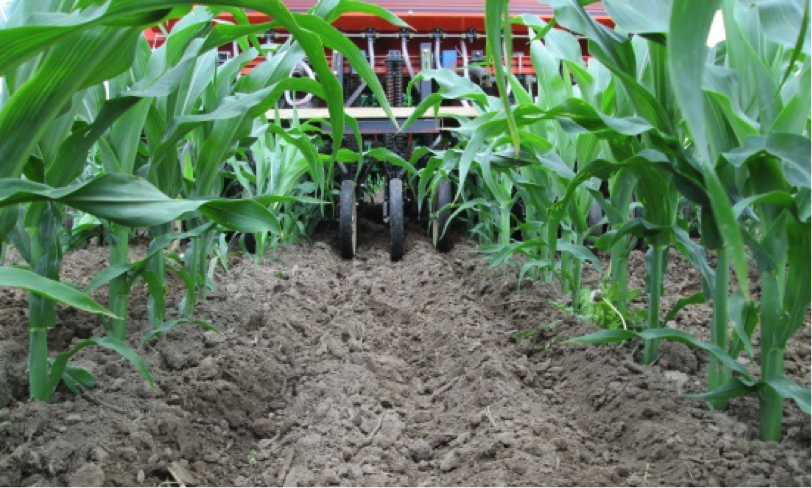 Interseeding is primarily done prior to crop canopy closure or prior to harvest when the crop canopy begins to re-open. After the crop harvest, the hope is the cover produces greater biomass since it’s already established compared to if it were seeded post-harvest. This article shares the research on interseeding, considerations for interseeding, and an on-farm research protocol for obtaining more cover crop interseeding data in Neb. 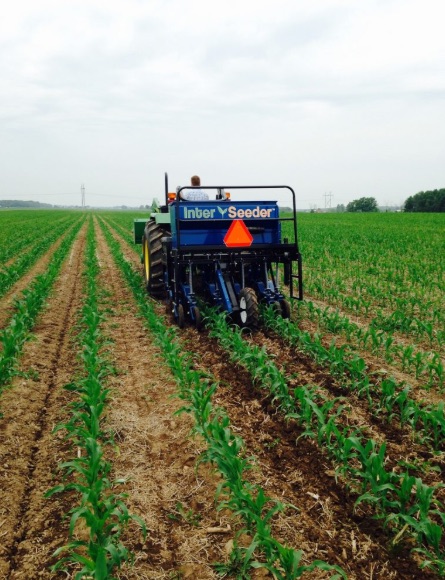 Angela Bastidas investigated interseeding in her Ph.D. work at UNL, broadcasting cover crops into corn-simulating aerial seeding. She interseeded several cover crop species [60 lb/ac rye; 20 lb/ac hairy vetch; 40 lb/ac soybean MG VIII; 10 lb/ac radish; and a 38 lb/ac mixture of rye, hairy vetch and radish (30, 5, and 3 lbs, respectively.)] at the time of corn planting as well as at the V8 stage. The later seeding date had no effect on corn yields but produced very little cover crop biomass. However, the interseeding at planting reduced yields by up to 160 bushels per acre. As summer cover crop and weed biomass increased with the interseeding at corn planting, corn yields decreased.

In a 2018 on-farm research and NRCS demonstration study, farmers in Merrick County compared a fall dormant seeding versus fall dormant seeding + spring interseeding versus a check. In the fall of 2017, both the dormant-seeded treatment strips and the dormant + interseeded treatment strips had a cover crop mix. The cover crop mix in both treatments was terminated with glyphosate on May 10, 2018. Corn was planted on May 17 followed by a post application of 32 oz glyphosate + 5 oz Status per acre on June 1. They used a Hiniker interseeder to plant the cover crop mix on June 26 which included 6 lb/ac cowpea, 6 lb/ac soybean, 0.5 lb/ac crimson clover, 5 lb/ac sunhemp, 2 lb/ac hairy vetch, 3 lb/ac buckwheat, 0.5 lb/ac chicory, 0.5 lb/ac flax, 0.5 lb/ac rapeseed/canola, 6 lb/ac Elbon cereal rye, 6 lb/ac spring oats. There were no differences in corn yield with any treatments; no biomass measurements were reported in the study.

In a 2017 on-farm research study, a Dawson County farmer compared planting various cover crops at the same time as planting corn in an organic system. Treatments included: 12 lb/ac soybean; 2 lb/ac clover; a 5 lb/ac mixture of phacelia, lentils and turnips; twin-row corn; and a check of monoculture corn. There were no yield differences among treatments; no biomass measurements were reported in the study.

Research from Other States

Researchers at Penn State have conducted numerous studies on interseeding cover crops and have even commercialized an interseeder. This FactSheet provides a summary of their research and their recommendations on the timing of interseeding into V5 corn, herbicide use and cover crop species to use.

Researchers at the University of Wisconsin seeded radish, red clover and winter rye into V5 corn (Figure 3). The covers had good growth up to grain harvest. Biomass of the cover crop species varied after harvest due to being covered by the corn residue. The rye was the only crop that needed to be terminated the following spring. There was no corn yield reduction and no visible stress to the corn in the two years of their study. This FactSheet summarizes findings from the University of Wisconsin trials. 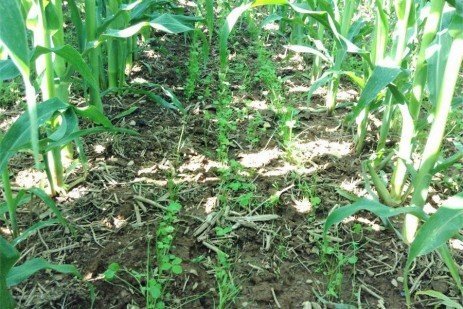 An Ohio State University researcher compared a monoculture corn crop to corn interseeded with individual species treatments of radish, annual ryegrass, and red clover. The cover crop species were interseeded using a high clearance drill and also via broadcast seeding at V6. Cover crop establishment was considered similar with both methods. There were no yield differences among the treatments. Biomass of red clover and radish after grain harvest was higher than annual ryegrass and the biomass of the red clover the subsequent spring was higher than the annual ryegrass.

In a 2017 on-farm research study in Ohio 13 lbs/ac annual ryegrass versus 30 lbs/ac cereal rye interseeded into V6 corn were compared to a check treatment. Both grass cover crops had 4-6 inches of growth at the time of corn harvest. There were no corn yield differences among the treatments.

The three-treatment protocol can be altered a number of ways including: