Organic farmers have to make hard choices between protecting soil from erosion and controlling weeds. For example, large-scale organic farming relies heavily on tillage. Tilling breaks up the soil to kill weeds and prepare for planting. But intense tillage can compact soil, cause erosion, and deplete nutrients. As a result, some organic farmers are turning to cover crops for weed control. Cover crops are planted after harvest as an in-between crop. Cover crops improve the soil with living roots that protect it from erosion and add nutrients. Cover crops are usually plowed down, but another option is flattening the cover crop to form a thick carpet, or mat. They do this with a roller-crimper—a heavy, rolling drum attached to a tractor. 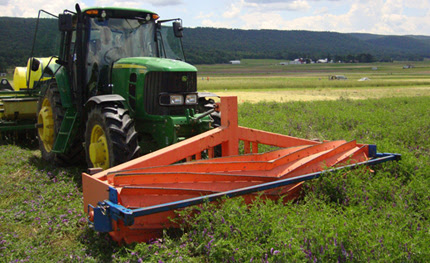 The farmer then uses a no-till planter to plant seeds into the flattened mat for the next season. The new crop grows through the cover crop residue, which helps suppress weeds.

It’s all in the timing, says crop scientist Clair Keene. Keene is a researcher at The Pennsylvania State University.

Keene and her colleagues wanted to find that perfect timing. So they planted an experiment in three different states: Delaware, Maryland, and Pennsylvania. For three years, they planted cover crops like hairy vetch-triticale and cereal rye, followed by cash crops like corn and soybeans.

The researchers flattened the cover crops at different stages of growth to find the right combination. Was it possible to have a cover crop that was big enough to suppress weeds, but not so big that it produced seeds?

They found that generally, letting the cover crop grow longer produces the best, if not perfect, results.

“There’s always trade-offs,” said Keene. “A bigger cover crop is better at suppressing weeds as a mulch, but that comes with the cost of letting that crop grow longer, restricting the growing season for the corn or soybean.”

Farmers want to plant their cash crop as early as possible, especially in northern states. If the cover crop is too small to be flattened, then they have to till it under, which defeats the purpose of improving soil quality. But if a cover crop reigns in a field for too long, it might start to produce seeds.

Every cover crop is a little different. For instance, the group found that cereal rye needs to be rolled in the middle of grain fill so that it doesn’t produce seed and show up when it isn’t wanted. And although hairy vetch is great at adding nitrogen to the soil, it can survive the roller-crimper and compete with cash crops.

Despite the tricky timing, Keene says rolling cover crops to form a mat has a lot of potential. Without it, “you’d have to plow the field multiple times, harrow it, plant it, and do a lot of weeding,” she warns. “That’s a lot of time in the tractor and a lot of diesel fuel.”

Read the full results of their experiment in Agronomy Journal. Funding for the reduced-tillage organic systems experiment was provided by USDA Organic Research and Extension Initiative.

To learn more about organic no-till and using a roller-crimper to terminate cover crops, check out the following articles: