One of the benefits of no-till and crop diversity is increased activity of the soil microbial community.  This change is especially favorable for restoring soil health, because of the numerous biological processes in soil that are based on microbial functioning (Figure 1).

For example, the microbial community is necessary for building organic matter and soil aggregates, as well as cycling nutrients and aiding nutrient uptake by plants. 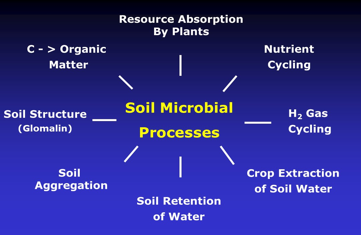 Figure 1. Biological processes related to or mediated by the soil microbial community.

Diversifying the microbial community and increasing its activity not only increases crop yield, but also can reduce inputs needed for crop growth by supplying nutrients or improving nutrient-use-efficiency. With this article, we describe research that quantifies the beneficial impact of the microbial community on crop production and nutrient-use-efficiency.

In eastern Nebraska, scientists quantified the effect of weather conditions and soil microbial activity on corn yields, using a simulation model based on 12 years of data (Reference 6).

This additional gain in yield, noted by the green arrow in Figure 2, shows that microbial diversity due to crop diversity also improves corn yield along with greater microbial activity. 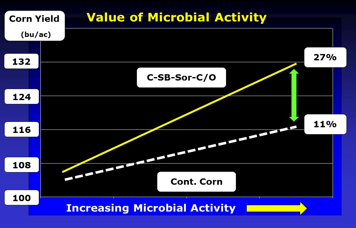 One possible explanation for improved corn yields with higher microbial activity is that nutrient uptake by crops may increase with microbial activity. In a research experiment that used an intact soil profile encased within a lysimeter (Figure 3), scientists were able to quantify the impact of microbial functioning on corn growth (Reference 2).

The lysimeter allows scientists to completely control quantity of growth variables such as water, nitrogen (N), and phosphorus (P) available for crop growth. Two treatments with the microbial community were compared in this study. The first treatment was the control, comprised of the native microbial community in the soil. 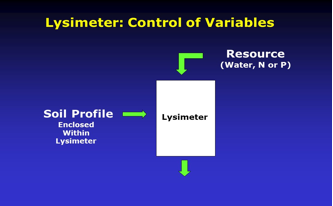 Figure 3. Experimental methodology with a lysimeter that encases a soil profile.  The system ensures that uniform inputs (water, N, and P) are applied across treatments, and can determine if inputs leach out of the system.  The microbial community was enhanced in one treatment, allowed to equilibrate, and corn grown in both the control and enhanced microbial treatment.

Corn yielded 22% more grain with the enriched microbial community. The authors attributed this yield gain to higher concentrations of N and P in corn.

A similar trend has been observed by producers in fields with several years of no-till and crop diversity, where the need for N in corn is less. The guideline for calculating N inputs for corn in tillage-based systems is 1.2 pounds of (N) per bushel of corn.

However, no-till producers are using 0.8 to 0.9 pounds per bushel to calculate N need, and still achieving high yields. They attribute reduced N need by corn to microbial-enhanced N cycling in soils and N uptake by corn.

Producers are also reducing P input in their systems. A study in the semiarid Great Plains found that P concentration was 15-30% higher in crops grown with no-till and continuous cropping compared with any rotation that included fallow or tillage. This gain with P concentration in crops was attributed to increased organic pools of P and microbial enhancement of P availability for plants.

One benefit of increased soil microbial activity is that water-use-efficiency (WUE) of crops may improve. In the lysimeter study discussed above, WUE of corn was higher when grown in soil with the enriched microbial community, producing 22% more grain with the same water use.

Increased WUE has also been observed in the semi-arid Loess Plateau of China (Reference 5).

The prevalent cropping system in this region is continuous winter wheat. Scientists in this region are seeking to diversify this rotation with the goal of improving both crop yield and soil health.  They found WUE of winter wheat increases with some rotations, which they attributed to changes with soil microbial activity.

Average winter wheat yield in the monoculture rotation during the 13-year study was 46 bushels an acre based on 16 inches of water use, or 2.9 bushels per acre. Adding diversity to the crop rotation increased WUE, but this change was related to crop choice.

WUE didn’t change when proso millet was added to the rotation (Figure 4), but winter wheat following corn was 8% more efficient with water use. Dry pea also improved WUE. Growing dry pea in place of corn in a 4-year rotation increased WUE of wheat 12%.

Higher WUE of winter wheat likely was related to changes in the soil microbial community.  Both dry pea and corn enhance microbial species that have been shown to improve WUE of crops, such as mycorrhizae and rhizobacteria. 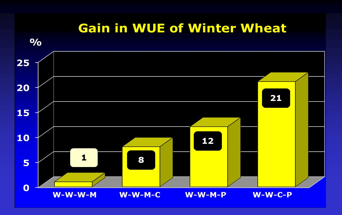 A study in the Ontario Corn Belt showed that yield stability of corn and soybean increases when grown in a no-till, corn-soybean-spring wheat rotation with cover crops compared with a tilled, corn-soybean rotation (Reference 4).

Analyzing yields across 31 years, corn and soybean were greater with no-till and crop diversity, but the greatest gain occurred in drought years. Soybean yield was 22% higher in dry years compared with 10% gain over all years. Corn yield responded similarly. This yield gain in dry years was attributed to improved soil health and greater microbial activity.

A second example was demonstrated in eastern South Dakota (Reference 1). Dry pea changes the microbial community by increasing rhizobacteria density in soil. Crops such as winter wheat and corn yield more following dry pea because rhizobacteria improve resource-use-efficiency, such as with water. Yet, the positive impact of dry pea on corn yield is greater in dry years. 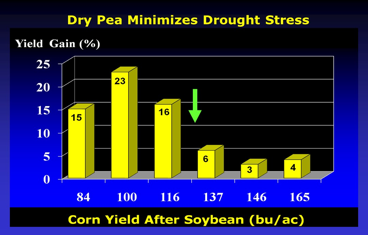 Examples discussed above indicate that this approach can help producers increase crop yields 15 to 30% without increasing inputs, or in some situations, reducing inputs such as N and P.

This approach will be especially favorable in regions where water supply is often low.  Furthermore, greater microbial activity will accelerate restoration of soil health due to its involvement with several biological processes in soil (Figure 1).