Cover Crops Good in Any Weather

It was scary planting soybeans into living cover crops for the first time this spring, Chad Ingels admits. “The first few passes I thought, ‘what am I doing?’” the Iowa Soybean Association (ISA) member said.

The 3- to 6-foot-tall cereal rye made it nearly impossible to see the planter marker. Plus, Ingel’s tractor isn’t satellite guided.

“I was pretty nervous, but it went really well,” he continued. “I did have a GPS map to serve as a guide.” 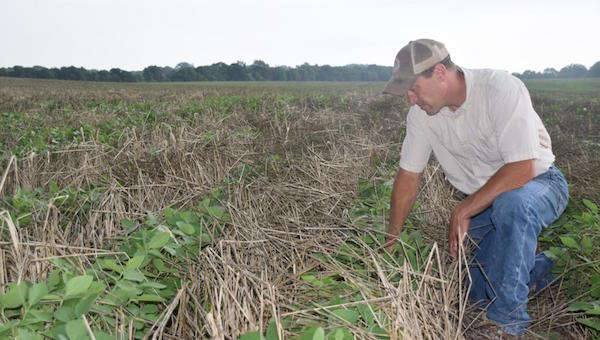 Chad Ingels of Randalia checks out one of his soybean fields recently that was planted into tall, green cover crops. The Iowa Soybean Association member believes the thick mat of cereal rye biomass helps soybeans beat the heat and thrive during wet and dry periods.

Ingels, who farms near Randalia, said the decision to “plant green” and terminate rye two days later worked out better than he hoped, especially given this year’s wild weather.

Other farmers who opted to spray cover crops just before or after seeding soybeans say the same thing. They believe better yields and herbicide savings will likely pay for the conservation practice, and maybe put a few additional dollars in their pockets.

“My confidence level is pretty high (that will happen), but I won’t know until harvest,” Ingels said.

Twenty acres turned to 80. Now, all of Ingel’s soybeans — 250 acres — are planted into covers. He’s conducting research trials with Practical Farmers of Iowa to see which cover crops overwinter the best. So far, that’s cereal rye, he said.

It wasn’t until this year, when Ingels started farming full-time, that he decided to plant green.

The benefits outweigh the challenges, Ingels said. Here’s why:

“A few tenths of an inch (at least compared to fields without cover crops),” Nelson said. “We have the data (to prove it).”

That can make a big difference during extended dry periods, he added. The latest U.S Drought Monitor released July 18 indicates nearly 60 percent of Iowa is abnormally dry or in a moderate drought.

A study from 2008 to 2014 analyzed soil water measurements at a central Iowa research site that included a winter rye cover crop in a corn-soybean rotation for 13 years. The timeframe included some of the wettest and driest years on record.

Results indicate significantly higher soil water storage up to 1 foot deep with cover crops compared to none. It further showed the cover crop increased the field capacity water content by 10-11 percent and water availability for plants by 21-22 percent. Cash crop growth was not hindered by the cover crop, according to the study.

“I’d say the crop is doing very well, though we had more regular rain than other parts of the state,” the ISA member said.

In soybeans with good cover crop coverage, Boyer said there was hardly any waterhemp to be found. In research strips without it, waterhemp “came in like gangbusters” and needed to be sprayed twice because the first over-the-top application didn’t take.

Boyer is in his seventh year planting covers.

“There’s no question it helps,” he said. “I take some satisfaction that some of my neighbors, after observing differences, are starting to plant them.”

Iowa farmers can apply for cost-share funds at their local Farm Service Agency office to plant cover crops and to implement other conservation practices focused on protecting water quality.

The cost-share rate is $25 per acre for cover crops for up to 160 acres. First-timers that apply by July 28 get priority. After that date, previous cover crop users can apply for $15-per-acre assistance.