By John Dobberstein posted on July 1, 2013 | Posted in Seeding Practices

One obstacle to cover-crop adoption in cooler northern climates has been the typically narrow window for getting covers quickly seeded and established after corn harvest to capture benefits to no-till soils.

But recent onfarm trials suggest the quality of short-season corn hybrids has vastly improved in the last decade. In fact, there may be an opportunity for no-tillers to harvest corn earlier — without losing yield, researchers say — and seed cover crops a few weeks earlier.

Both Penn State University researchers and Holtwood, Pa., no-tiller Steve Groff have found short-season corn yields have been competitive or even superior, in some situations, to longer-season hybrids. No-tillers could also benefit from crop pricing flexibility in addition to gaining the benefits of seeding cover crops.

Groff says corn growers could use earlier-maturing corn to spread out harvest and allow for easier management in terms of timing flexibility.

“I’m not saying no-tillers should do it on the whole farm,” he says. “This concept works together with cover cropping, because sometimes that window of time to seed is way too small and every day counts with cover crops.”

Last year on Groff’s Cedar Meadow Farms in southeastern Pennsylvania, T.A. Seeds corn hybrids with maturities ranging from 83 to 111 days were planted between April 16 and April 25. All plantings were replicated three times in 30-inch rows of 500 to 1,000 feet.

Plant populations were 32,000 seeds an acre for each hybrid. Fields were fertilized according to need.

As the hybrids matured, Groff’s team harvested the corn at moisture levels of 15.5% to 20.8%. Following harvest, cover crops designed for a longer calendar period were seeded in hopes of duplicating what farmers would typically do in their fields.

During the growing season, moisture was adequate until mid-June, when it turned dry for 5 weeks. Adequate moisture returned in July.

“The first stage of this project is seeing if short-season varieties have validity, and last year, they did,” Groff says. “Part of it is weather related. Last year, we made more money with short-season corn that some experts said shouldn’t even be grown around here. In July we had rain, and the average farm yield was 155 bushels.”

After the fields were harvested, cover-crop mixes that included common and hairy vetch, crimson clover, Persian clover, annual ryegrass and triticale were seeded.

This spring, Groff planted those fields to a single corn hybrid based on the best date to plant. He’ll measure this fall what might have been gained by seeding the cover crops sooner.

In another field this spring, Groff repeated the early-corn experiment as a continuation of the 3-year project.

Groff noted last November that the cover-crop vegetation in earlier-seeded plots was 6 inches taller than plots planted the first week of October.

“But when we went through winter and came out in spring, the covers looked fairly even — like you couldn’t tell which plots were planted earlier,” he says. 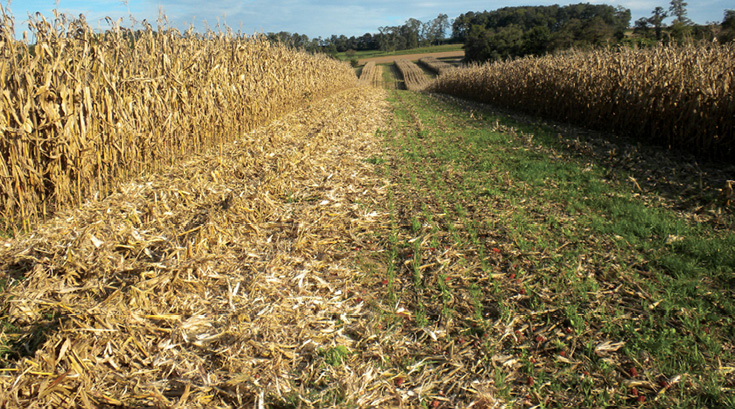 In some cases, harvesting corn earlier allows more options for selling, especially if delivery contracts can be inked before Midwestern corn harvest gets under way.

They found only a modest yield bump, with the longer-season hybrids yielding 29 tons per acre compared to 30.5 tons for shorter hybrids.

The comparisons usually had a dozen or more hybrids. Most received liquid in-row starter fertilizer and sidedress nitrogen applications, as well as fall or spring manure applications.

“I still feel later hybrids can have advantages in some environments,” Roth says, “but our recent data shows strong performances by early hybrids.

“That may cause farmers to consider using them for some acres where they want to seed cover crops or take advantage of local market needs.”

Roth cites several reasons for moving to shorter-season hybrids on some acres: