Herbicide resistance continues to be a growing concern among no-tillers. Not only are more weeds developing resistance, but some herbicide-resistant weeds, such as Palmer amaranth and waterhemp, are also very difficult to control if not caught early.

Readily available broad-spectrum herbicides helped many producers make the switch to no-till from conventional tillage in the 1990s. But as herbicide resistance began appearing in the 2000s, it started affecting some farmers’ ability to no-till and led them back to tillage to control weeds.

“Producers need conservation tools like no-till, but they also need to manage weeds,” says Chris Proctor, weed scientist at the University of Nebraska. “To effectively control herbicide-resistant weeds, producers are going to have to implement multiple integrated pest management (IPM) tools, including mechanical and cultural strategies, into their IPM programs.”

“When weeds start stacking resistances, they become even more difficult to control,” Proctor says. “I think herbicides are an effective tool for controlling weeds, but we need to have tools in addition to herbicides in our toolbox.”

Palmer amaranth and water hemp are two aggressive pigweeds that are sometimes referred to as “super weeds.” These weeds can overtake no-tillers’ fields if left unchecked. Both can produce thousands of seeds from a single plant.

Palmer amaranth can grow as much as 3 inches in a day, which is problematic as most effective control is seen while plants are still relatively small. Proctor says in a greenhouse study, Palmer amaranth plants often escaped herbicide control measures after the plants grew taller than 6 inches. For waterhemp, herbicide control decreased when plants reached 8 inches tall. Mature Palmer amaranth plants range from 6-8 feet tall but can grow as high as 10 feet tall, making them very competitive with row crops. Waterhemp can reach heights up to 8 feet. Both weeds are resistant to many herbicides, including glyphosate.

To demonstrate the devastating impact a single Palmer amaranth plant can have if allowed to go to seed in the field, University of Arkansas researchers scattered 20,000 seeds of the pigweed over one square foot at the end of a cotton field in 2007. The seeding rate represents the number of seeds a single weed can produce. The only control measure the scientists used in the field was glyphosate. By 2009, that single plant resulted in Palmer amaranth spreading across the entire field from the cotton harvesters. By 2010, researchers reported the field was 95% covered by the weed and resulted in a failed cotton crop. 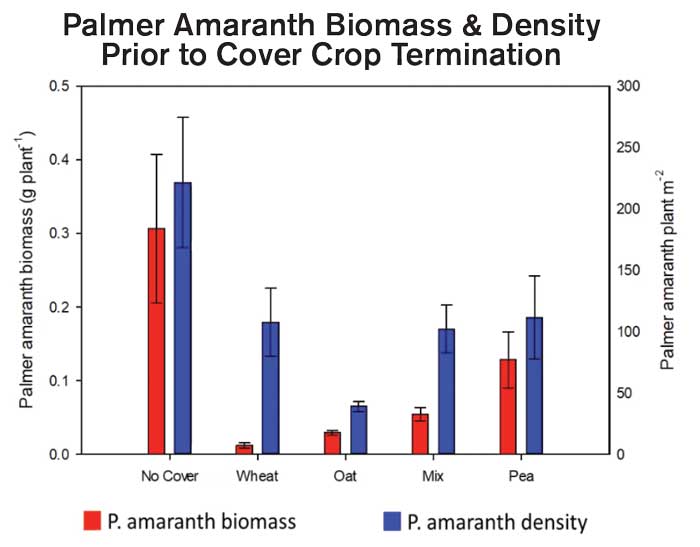 “This was certainly a worse-case scenario, but I think it highlights how important it is to manage these weeds and prevent them from going to seed,” Proctor says.

In many cases, once a no-tiller finds a pigweed in their field, they may not be able to apply timely control, especially if they also must contend with adverse weather conditions like wind or rain. Another issue with the pigweeds is they can have extended emergence times.

“In Nebraska, we will see a flush of pigweeds emerging by mid-May to early June, but emergence will often continue with these weeds later into the season,” he says. “We just don’t have effective tools that you can use in May or June that are still effective in August. It is going to take multiple strategies, multiple tools and overlapping approaches to be able to manage these pigweeds throughout the growing season.”

Researchers have conducted numerous studies on potential weed control measures, including cover crops’ effectiveness in controlling different types of weeds. Scientists compared the results from 15 studies that had fields with cover crops and fields without cover crops in Midwest corn-soybean rotations. They were looking for similarities across these studies to determine whether cover crops may help in weed suppression.

“When cover crops are planted before the crop, they seem to be more effective in controlling winter annual weeds,” Proctor says. “When planted after the cash crop, they still provide some weed suppression for summer annual weeds.”

“There were fewer weeds and fewer Palmer amaranth plants where the cover crop was present,” Proctor says. 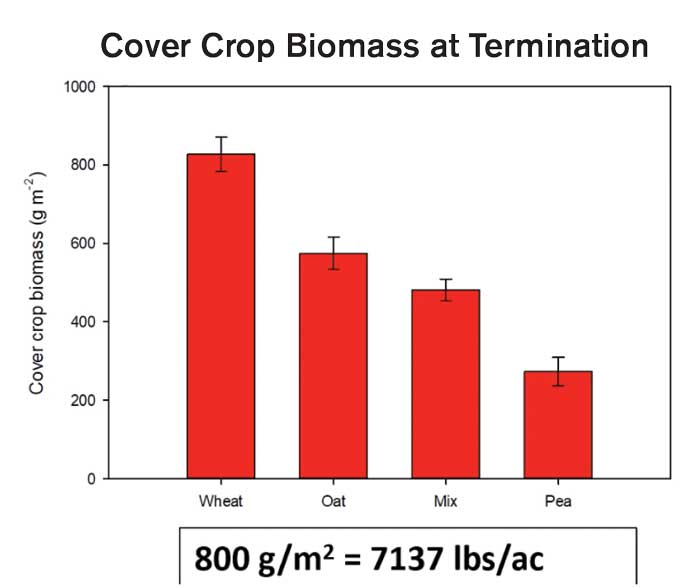 For the next part of the study, researchers determined how oats, an oat and pea mixture, peas and wheat affected the pigweed’s biomass. Wheat produced the most cover crop biomass, while peas produced the least.

The study also explored how residual herbicides affected Palmer amaranth in scenarios with and without a cover crop. While the herbicide was effective in both situations, relying too heavily on one control method may not be the best idea, especially knowing pigweed’s ability to develop herbicide resistance.

Proctor found similarities in a cover crops’ ability to suppress marestail, another glyphosate-resistant weed that is common in winter annual wheat. Fields containing cereal rye had less marestail overall, and the weeds that were in the field were smaller in size.

“You could see a huge reduction in the number of weeds that were present in fields that were planted with a cereal rye cover crop compared to fallow fields,” he says. “Where the cover crop was present, we reduced the biomass of those weeds.”

“When you hit the threshold of 1,000 pounds of cover crop biomass per acre, the decrease in weed biomass was noticeable,” Proctor says.

In another research project, Proctor and researchers from Illinois and Wisconsin studied how Palmer amaranth develops in different cropping systems and scenarios. They grew the weed in a greenhouse and transplanted plants to either a corn, soybean or fallow field when the weed reached 3-4 inches tall around June 1. This is close to the time the weeds typically start appearing under normal growing conditions in these states.

In the fallow field, the weed prolifically grew and produced thousands of seeds. In corn and soybean fields, Palmer amaranth plants were smaller, likely due to increased competition from the row crops. However, once the pigweed outgrew each of the corn and soybean plant canopies, it flowered and produced seeds.

This study corresponded to data found in the Kansas study where Palmer amaranth emergence was delayed by a month in fields with a wheat or oat cover crop compared to fields with no cover crop.

“If we can delay emergence of these pigweeds and allow our crop canopies to be more developed before the pigweeds emerge, we think it could be a really effective tool in helping suppress these pigweeds,” Proctor says. “The late-emerging Palmer amaranth weeds in our corn and soybean fields were significantly smaller. Even still, the weeds continue to be incredibly adaptive and still flowered but produced a lot less seeds.”

No-tillers must find a balance between cover crop growth with planting and harvesting of their cash crops to maximize the cover crop’s weed suppression potential. Researchers determined that 4,500 pounds of a grass cover crop biomass per acre would reduce weed pressure by 75%. The same amount of other types of cover crops would reduce weeds by 40%.

Reaching 4,500 pounds per acre of cover crop biomass could be challenging depending on a producer’s geographic location in the Midwest. Researchers used models to estimate how much biomass cover crops could produce based on planting dates of Sept. 15, Oct. 7 and Nov. 1 at locations across the Midwest. Due to limited fall growing conditions, it would make it very difficult from some areas of the Midwest, especially those farther north, to reach 4,500 pounds per acre of cover crop biomass because they tend to harvest their cash crops later.

The Kansas studied showed that producers can get some weed suppression when cover crops reach 1,000 pounds of biomass per acre.

“Often, trade-offs need to occur when thinking about the challenges that planting cover crops could present,” Proctor says. “We may not be able to achieve 4,500 pounds per acre of cover crop biomass in parts of the Midwest, but we may be able to get close to half of that production — 1,500 pounds per acre, which would still provide some weed control.”

In another study, Proctor analyzed planting dates of the cover crop cereal rye in Nebraska. These dates ranged from the end of September through the end of October. He found the later the cover crop was planted in the fall, the less biomass it produced the following spring.

“There were fewer weeds where the cover crop was present…”

He found when cover crops stayed in the ground later into May, they produced significantly more biomass production than those terminated in late April or early May — 2 weeks earlier.

“Two weeks in May can make a huge difference in the amount of biomass that you can produce,” he says. “Even with wheat at most locations, our cover crops were producing over 3,000 pounds per acre of biomass. There is a good opportunity for both wheat and rye cover crops, and it just shows that sometimes there might be enough value in cover crop production to delay planting.”

Proctor and other researchers conducted a study in Nebraska, Ohio and Kentucky to find out how planting soybeans with different maturity dates could affect cover crop planting in the fall. They found producers lost 3-4 bushels per acre in yield when planting between maturity groups 2 and 3. But maturity group 2 was harvested 10-13 days earlier than maturity group 3. The earlier harvest date could allow for earlier cover crop planting, which could give the cover crop the opportunity to produce more biomass and provide better weed control.

“While more work needs to be done, there are opportunities to maximize yields in these maturity groups and still give us an earlier planting time for cover crops,” he says.

As with many challenges in farming, there is not one quick and easy answer to herbicide resistance. Cover crops may be one tool for no-tillers to use, but they will have to find a balance between weed suppression from the cover crop and potential yield impacts in the grain crops they are trying to protect.

This article was compiled from a video presentation that originally occurred at the 2022 National No-Till Conference. Click here to see the original video and presentation.