While cover crops are growing in popularity in Nebraska, there are still significant planting challenges. To address these challenges, interseeding with ground-based equipment has been proposed as an alternative planting method to increase cover crop success. In 2022, the University of Nebraska-Lincoln began a Highboy Cover Crop Interseeding Project (HiCCIP) to address cover crop barriers in the state and investigate water quality impacts of cover crop adoption.

The HiCCIP is a unique project that seeks to address barriers to cover crop adoption in Nebraska. The project is a collaboration between the University of Nebraska-Lincoln, Nebraska Department of Environment and Energy (NDEE), and several Natural Resources Districts (NRDs), including the Lower Platte North NRD, Lower Platte South NRD and the Upper Big Blue NRD. The main barriers this project seeks to address are:

Traditionally, most cover crops in Nebraska are planted following cash crop harvest. However, this planting method, while perhaps the most simple and convenient, in most cases does not allow for sufficient time for cover crops to establish and produce biomass before winter temperatures arrive. As a result, interseeding cover crops into standing corn or soybeans has been suggested as an alternative planting method that would allow cover crops more time to develop prior to winter. There are several interseeding options available, such as aerial, but this method can be very uneven, and seeds are often captured by the crop canopy and do not reach the soil surface. Using a ground-based machine can potentially increase success as seeds are placed directly on the soil surface.

With most cover crops being planted following harvest, there can be significant time and labor challenges. Harvest is a very busy time of the year, which can be further complicated by weather delays or equipment issues. As a result, seeding a cover crop — which does not bring in an immediate profit — is often a low priority. By practicing late-season interseeding, which often occurs at the end of August or early September in Nebraska, cover crops can be planted at a time of year when labor and time is more available. 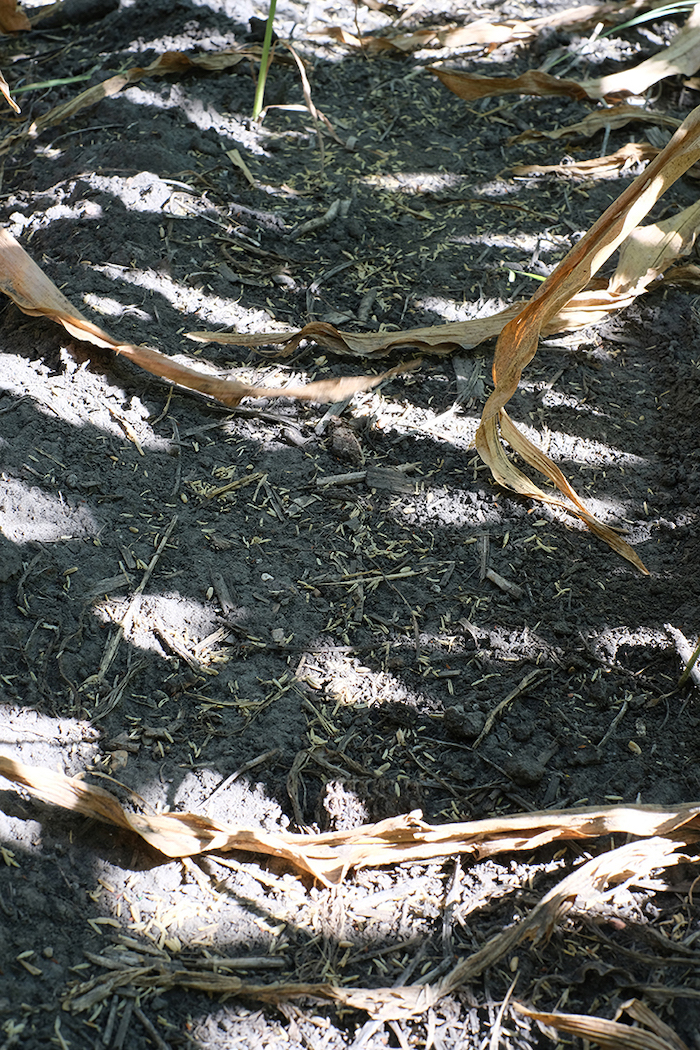 To address the barriers to cover crop adoption, the University of Nebraska-Lincoln was awarded a grant funded by the NDEE to investigate and promote the use of late-season interseeding technology. Through this grant, the university purchased a high-clearance Hagie sprayer that was retrofitted to spread seeds in standing crops with a Montag Fortifier system. This “highboy” is capable of driving through late-season corn to apply seed at rates of up to 200 pounds per acre. Key features of the highboy interseeder include its wide booms that make it capable of covering large areas quickly (60-80 ac/hour), stainless steel drops that allow seed to be placed below the canopy and directly on the soil surface, and technology integration with John Deere guidance, rate control and data systems.

The project has been proposed for five years, with the fall of 2022 being the first seeding season. For the first year of the project, 29 producers participated and used single- or multi-species seed mixes depending on their needs and goals. This cover crop seed was applied near the R5 stage of corn across the selected fields. Due to the dry 2022 growing season, fields with irrigation were prioritized to allow for successful germination and establishment. Fields were irrigated right after the seeds were placed, with irrigation rates ranging from 0.6 to one inch.

For future seasons, the project plans to expand into additional areas and increase the scope of research and demonstration. This will open opportunities for additional producers to participate and select from various levels of involvement. For example, beginning in 2023, producers will be able to select from simple one-year demonstrations where the machine will seed up to 200 acres, to being involved in multi-year evaluations that will span crop rotations as well as evaluate aspects of water usage, nitrogen availability to the cash crop, yield impacts and more. Parallel research on cover crop interseeding using the highboy will also commence at the university’s Eastern Nebraska Research Extension and Education Center (ENREEC) in Ithaca, Neb. 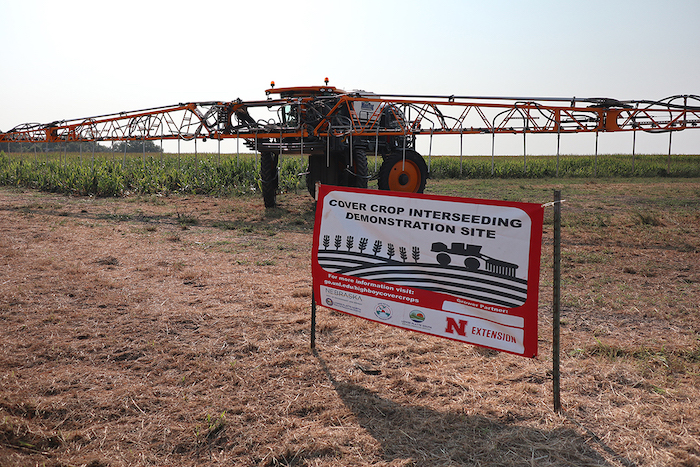 Growers interested in having acres seeded in either the single-year or multi-year project options are encouraged to reach out to their local NRD office to determine eligibility and start the application process. There are a limited number of openings in 2023 and priority watersheds will remain a focus, so not all applications will be selected.

Through this project, there is the opportunity for a service provider, such as an agricultural cooperative or private custom applicator, to receive a grant from the NDEE to assist in purchasing a similar highboy machine. This will allow interseeding to continue to grow in the state and provide economic opportunities for a Nebraska business.