Cover Cropping for Hunting and Grazing

During the most recent calving season, Holsing Farms was home to over 1,100 head of cattle — the most in 40 years. In the summer of 2021, the operation ran “about 300 of our own cow-calf pairs, a little over 300 of our own yearlings and then just shy of 500 custom grazed pairs that we manage for another producer,” Gene Holt says.

The formula to success never stays the same. “I’m still learning every year, I’ll be learning forever,” Gene says, but the utilization of cover crops is a key part of it. The Holts began planting covers almost a decade ago, mainly for two reasons: grazing and wildlife.

“It’s good to have something green out there, it’s a magnet for animals.”

They started with turnips, which didn’t go over too well with the pheasant hunters because “it’s like walking on tennis balls,” Kurt Holt says. “You can’t make everyone happy. The cattle like them. The hunters don’t,” he adds.

Rye is the “go-to” cover for their wildlife food plots. They enjoyed success with aerial applications in the past, but now Gene says they use a 3-point mounted broadcast spreader to get the job done more quickly. They use it for a winter green to attract deer and pheasants, before grazing it in the early spring.

“We like rye because it’s hearty and doesn’t take much moisture to get going,” Gene says. “We’re coming off a drought and couldn’t get anything established. But last fall, we put some rye in the low ground, and that will work for a couple years if it’s managed correctly.”

The Holts rely on covers for about one-quarter of the grazing schedule. They graze a mix of sudangrass, millet, turnips, milo, oats and rye from January to March.

“Then from April on, it’s predominantly grass grazing and corn stalks in early winter unless the snow gets too deep,” Gene says.

South Dakota ranks among the top 15 states in annual snowfall with an average of just under 38 inches per year. With that in mind, the Holts always prepare for arduous conditions, keeping a baseline inventory of hay in case Mother Nature throws a wrench in the plans.

“There are times we have to feed hay because of snow, or we guessed something wrong and ran out,” Gene says. “We always have those checks in place. We make sure there’s at least 30 days of feed in the yard. Most of the time the corn stalk is good enough where we can go all the way through, but 2019 was a tough winter. We probably fed hay for close to 60 days that year. It’s always our challenge to see how long we can graze out.”

The ranch and farm are separated by name only, with both operating under one roof. The covers used for hunting are the same ones used later for grazing.

“Most of the wildlife food plots will be corn with rye broadcasted onto it,” Gene says. They also like milo because birds flock to it even more than corn for the protein and energy. It’s also shorter than corn, so it’s more advantageous for the hunters as well. 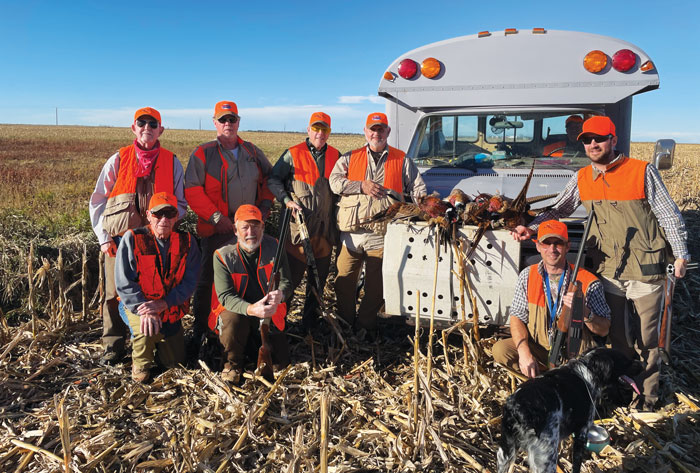 HOLT RANCH: Upwards of 60 hunters make the trip to Holt Ranch every fall for an all-inclusive pheasant hunting excursion. The group started small in the mid-90’s and continues to grow every year. Hunting season is a 35-day sprint from October to November.

Their approach doesn’t require termination. They let turnips and rye stand for as long as possible to hold the wildlife. Then after hunting season ends, the cows take care of the rest.

“Our system is different with our crop ground that we’re using covers on,” Gene explains. “We’re not searching for maximum yield.”

They’re also OK with a certain amount of weed growth because Gene says it serves as a nice welcome mat for the pheasants.

“If the plots are too clean like a conventional corn field, the birds won’t stay in them,” he explains. “Whereas if you have a percentage of weeds, they’ll spend more time there. The birds like the security of it.”

Naturally on a rangeland, perennial grass is atop the Holts’ power rankings. They have a little bit of everything in the mix.

“We’re cool season dominant,” Gene says. “Heavy on smooth brome — we tried to change it, but it wants to be dominant. We get a lot of green needle and western wheat in certain areas that flood after snow melts. Sub-irrigated areas will get bluestem more so than switch grass. There’s also Indian grass.”

The Holts hire a neighbor to air seed additional covers into the crop land, including turnips in May and August, and sudangrass and millet in early June. They cut the sudangrass in October and Kurt says it holds up well in the winter

“Those cows will dig it out,” he explains. “It doesn’t matter how deep the snow is.”

““We’re trying to use cover crops as a way to attract and hold as much wildlife for as long as possible...”…”

They’re noticing a significant decrease in soil erosion where covers are planted. “Good things are happening under the soil,” Gene points out, and it’s paving the way to their main goals.

“We’re trying to use cover crops as a way to attract and hold as much wildlife for as long as possible,” Gene explains.

“We get the income from the hunting and the joy of seeing all the wildlife,” Kurt adds. “But the thing we always have to fall back on is the cows going in and cleaning it all up.”

Grazing 365 days a year is the goal, even though Gene admits it doesn’t always work out as planned. He says they calve in May and June, which allows for 12 months of rotational grazing.

“We run our cattle in large herds to shorten the graze period,” Gene explains. “Most of the time it ends up being a 5-day graze.”

The Holts consider several variables before pinpointing the right time to move pastures.

“If it’s time to go then it’s time to go,” Gene says. “But our strategy changes based on how much residual we’re leaving. If it’s a dry year the grasses essentially go dormant and aren’t impacted by grazing to the degree they would be with moisture.”

the Holts are coming off one of the worst drought years in the history of their farm.

Here’s how they managed it:

“We have a flowing well on our place which is a great resource for us,” Gene explains. “Even if we had dugouts that were dry, we would just flood that dugout with the well and use it like a big tank.”

“Sometimes we’ll even set up a portable tank and then just let the water run into it,” Kurt says. “A 2,000-gallon tank. The cows will drink out of it.”

“We’ll let it run into the dam or dugout too, just to fill it,” Gene adds.

The Holts also use a rural water system (dubbed WEB, for Walworth, Edmunds and Brown, the counties that joined together to plan the water system in the mid-1970s) on the south part of their property, which they say can be hit or miss at times.

“It’s WEB water and we had issues with it this year with not enough volume or pressure,” Kurt explains.

They started rotationally grazing 40-acre paddocks, before eventually doubling up to 80 this past summer.

“I think rotational grazing really pays,” Kurt says. “I don’t want to be the guy that moves cattle every 6 hours. I’m not going to do that. But by running them in large herds for 5 days, the grass has 5 days it’s working and 360 that it’s resting.”

Gene will be the first to tell you what works for them, might not for others when it comes to raising cattle.

“We’re doing everything backwards,” Gene says. “We don’t provide many supplements. We’ve done it both ways. We’ve tried no mineral and then tried chelated mineral, just to see if there was a difference. Some years we had better conception with no mineral than we had with chelated.

“I’ve seen more of an impact by shortening the graze period than I have by any other thing, in terms of performance and fill on cattle,” Gene says. “Most winters, we don’t feed grain to weaned calves. So, we don’t get the breed ups that you’d want to brag about in town or anything. But we don’t have the cost in them and that’s our game. We play small ball more than for the home run.”

Plotting for the Future

Kurt Holt can hardly contain his excitement for 2022, especially after such a dry 2021.

“We’re excited for this year because we’re hoping to get moisture,” he says. “The grass is in a good position for the spring. We had over five inches of precipitation in October, so things would’ve gone dormant in a very positive way.”

The Holts will also look to add sunflowers, which start tipping over after a freeze. Hunters aren’t big fans because as Kurt says, “it’s like walking through a jungle,” but it further satisfies their main objective of encouraging wildlife to stick around.

“I’m optimistic about the future. Getting custom cattle and just trying the game all over again, seeing if we can play it a little better than we played it this past year.”