By Libby Wawzenek posted on May 30, 2022 | Posted in Seeding Practices, Economics

Farmers have a variety of tools at their disposal for managing weed populations in their fields. However, when it comes to pigweed, the options available can be frustratingly limited.

“Generally speaking, the two major pigweeds — Palmer amaranth and waterhemp — are considered the most troublesome weeds of the U.S. corn, soybean and cotton production systems, and they have evolved resistance to multiple herbicides,” says Prashant Jha, an associate professor and extension weed specialist with Iowa State University.

Because there are so few herbicides that successfully combat pigweed, it’s important that farmers look to non-chemical methods to eliminate it from their fields, says Tom Barber, a professor and extension weed scientist with the University of Arkansas.

“Anything we can do that’s non-chemical — meaning cultural practices, mechanical practices — is good, because that reduces the selection pressure on our herbicides that still work on the pigweed,” Barber says. “It’s one of those weeds that adapts very easily to control methods.”

For some soybean and cotton growers in Arkansas, Barber says, planting cover crops to aid in weed management has proven to be a reliable practice in recent years.

“A lot of acres that have cover crops probably wouldn’t if it wasn’t for the amount of herbicide resistance that we have in the pigweed populations,” he says.

Herbicide resistance isn’t the only problem with pigweed.

“It’s a prolific seed producer,” Barber says. “One plant that’s not competing with other plants can produce a half a million to a million seeds per plant. In competition with soybeans or cotton or other weeds, that number will be reduced to about 200,000-300,000 seeds per plant, and those seeds germinate very easily.”

According to Barber, pigweed is one of several weeds that germinates from a shallow depth — somewhere within the first inch of soil — and its ability to break dormancy and germinate is reliant on temperature fluctuations. That’s where the cover crop comes in.

“That cover crop prevents drastic up and down temperature fluctuations in the germination zone for our weed seed,” Barber says. “Without that fluctuation, we won’t see nearly as many of our weed species germinate — especially Palmer amaranth.”

Pigweed is most likely to germinate readily once high temperatures are in the 80s and lows are in the 60s, Barber says.

“The cover crop acts as a physical barrier, providing shading and cooler temperatures that delay germination…”

Jha says another way the cover crop can act as a weed suppressing agent is by creating a shaded canopy that stops pigweed seeds from getting enough light to properly emerge.

“The weed seeds are beneath that [cover crop] residue, under dark conditions, and that prevents germination for light-sensitive species like Palmer amaranth and waterhemp,” Jha says.

Jha has seen tremendous benefits from the use of cereal rye as a tool for weed management, particularly because of its rapid growth rate, which leads to a heavy production of biomass.

Jha recommends that farmers wait until the cereal rye grows roughly waist-high before terminating it — that should yield close to 4,500-5,000 pounds of biomass per acre, which he says is an optimum level for weed suppression.

Barber says cereal rye is especially beneficial to farmers who are just beginning to learn about cover crops, both because of how easy it is to establish and how readily it can be killed off.

Barber advises that farmers plant roughly 50 pounds of cereal rye per acre. That’s comparable to Jha’s recommendation of 55-60 pounds per acre, although Jha notes that his suggested rate may change depending on planting method.

“Some growers broadcast the cereal rye in standing corn just before harvest, but the stand is pretty patchy. If you don’t have the drill seeded cereal rye with a good stand, you probably have to delay your soybean planting because you’re not getting enough biomass.”

While cover crops can play a big role in preventing the growth of pigweed, it’s not the only option Barber advocates for.

“We have a lot of producers roving the fields, pulling the pigweed up so they don’t add to the seed bank,” Barber says. “The seed bank management for Palmer amaranth and pigweed is critical. If we let it go to seed in the field, we’re losing the battle — they produce so much seed that it’ll take 3-4 years to get rid of the seed they produce in one year. 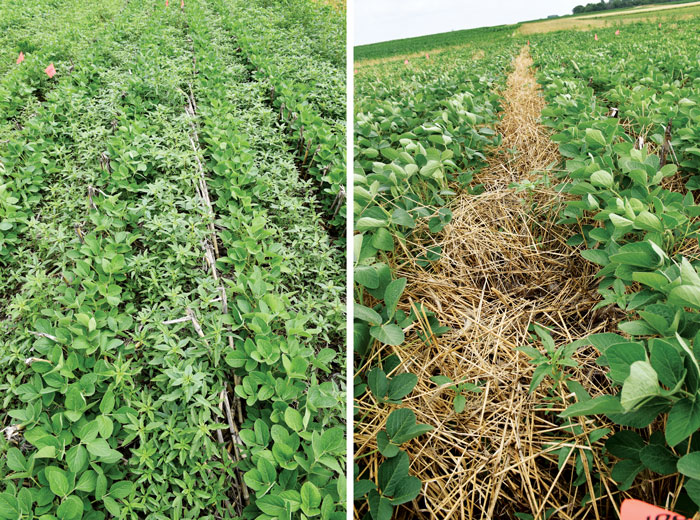 “It really takes diligence to reduce that seed bank and get them down to a manageable level.”

That diligence extends beyond the fields to equipment, Barber says. He stresses the importance of farmers cleaning their machines to prevent unintentional pigweed spread.

“Palmer amaranth seed are very small — the size of a pinpoint,” he says. “They can move in dirt particles that are left on a piece of tillage equipment or in tires of tractors. We’ve always said that combines are the best pigweed seeders we have.”

Although farmers in Arkansas frequently embrace no-till farming methods, Barber says tilling is another way to support pigweed elimination because of how far beneath the soil surface it pushes the pigweed seeds.

“When we put the flood on in rice, it really eliminates our pigweed competition because pigweed hates wet feet.”

Jha says narrower soybean rows can be a highly successful method to employ in tandem with cover crops. One option he suggests is reducing soybean rows from the standard 30 inches to 15-inch rows.

“We have seen great benefits from the reduced row spacing effect — an almost 20-30% reduction in the emergence of waterhemp and Palmer amaranth,” Jha says. “You are definitely getting that suppression from the early canopy effect and the reduction in the light quality. These strategies improve the efficacy of your herbicides, because now you’re looking at less dense weed pressure and smaller sized weeds.”

While Barber lauds the benefits of narrower soybean rows, he says that strategy won’t work for cotton fields.

“Cotton is still a wide-row crop,” he says. “Narrowing the row space on cotton is not as easy. We can only go so narrow because we’re limited based on the equipment that we have right now.”

Even though herbicides aren’t an effective standalone tool for combatting pigweed in soybean and cotton fields, Barber is concerned when he hears about farmers who have abandoned the use of chemicals altogether.

“[Some farmers] expect the cover crop to be a weed control program within itself,” he says. “Although it does help, we tell them to continue to use residual herbicides. A lot of them try to get away with not using those.”

If a farmer is interested in getting started with cover crops as a weed management tool, Barber suggests taking the time for appropriate research before beginning.

“You have to figure out which ones work best for your soil type. It also may depend on what you’re planting.

“It’s something that farmers should ease into versus going whole hog across the whole farm with. They really need to talk to experts or agronomists in their state to get the big picture.”

6 Tips for Establishing Cover Crops with a Grain Drill