Creating a Blanket of Benefits with Cover Crop Creativity

By James DeGraff posted on October 7, 2018 | Posted in Seeding Practices

For Clare, Ill., grower Trent Sanderson, leaving his comfort zone and working with trial and error is the best way to determine which cover crop mixes work best in his fields.

The greatest of growing seasons has little effect on Trent Sanderson’s approach to cover crops across his family’s 2,000-acre corn, soybean and wheat operation in Clare, Ill. In his mind, more can always be done to maximize the value of every field, whether it’s a new seed variety, application method or frugal machinery investments.

Erosion concerns contributed to Sanderson’s adoption of strip-till in 2007, along with the benefits of an improved seedbed and organic matter provided by untilled crop residue. After experiencing initial improvements to soil health, he doubled down with implementing cover crop practices in 2012.

Experimenting with a series of seed mixes including cereal rye, radishes and red clover, along with different seeding strategies to minimize seasonal risk, Sanderson has tracked the tendencies of his fields.

Ultimately, he says there’s no substitute to a trial-and-error approach for farmers in search of the best personal methods with cover cropping success.

“I get so many questions on what our results are from people that haven’t tried anything at all,” Sanderson says. “Get your hands dirty and dig up some roots to understand what’s going on.”

Now is the time to improve and evolve your no-till system. Experts say some farmers have been overdoing the seeding rates for cover crops, spending entirely too much money without much of an outcome. So, what’s the perfect balance? How does a farmer gauge whether or not enough seeds are being planted? What is the minimum amount of seeding needed so costs can be reduced? Read on and get a handle on your cover crop costs! Download now »

From the onset, Sanderson’s mentality for cover cropping was to utilize all of his pre-existing equipment to get the job done. Looking to implement an intensive cover crop mix for his wheat acres, he took his 1200 Case IH planter and equipped it with different sized sugar beet disc plates, first planting radishes in 30-inch rows at 2 pounds per acre. The setup worked effectively on the 90-acre field, as Sanderson reflects on how they flourished after 60 days.

“On the base of the radish, the entire row might as well have been strip-tilled with a knife-style tool bar,” he says. “It was lifting the whole row, which was amazing to see. The biggest base of that plant was over 2 inches in diameter.”

With the help of RTK row guidance on the planter, Sanderson moved 15 inches in between the radish rows and planted Austrian winter peas, also in 30-inch rows, but at 20 pounds per acre. Key to the success for winter pea survival as a cover crop is proper inoculation timing, a concept Sanderson says isn’t always a point of emphasis.

“The winter peas were inoculated the day of planting” he says. “A lot of us might be used to inoculating just our soybean crops to help with nodulation and N fixing, but that’s very key in cover crops as well.”

Both the radishes and Austrian winter peas winterkilled, and once the snow melted and Sanderson could evaluate the growth, the radishes had grown to about the size of a half dollar, with the winter peas clearly visible in between rows. Looking to capitalize on the organic and nutrient benefits of both cover crops, Sanderson then strip-tilled and planted corn in between the winter peas and radishes, hoping the corn roots could reach both cover crops.

One thing Sanderson points out about radishes are the holes that can be left over in the soil afterwards, especially when planted in 30-inch rows. In certain soil types, those holes left over can be large enough to spell trouble for yields if the corn is planted nearby. For Sanderson, however the loamy, clay-style soil minimizes concern on his farm.

“If the radishes had broken off, those holes are no more than a half-inch deep, so it’s never a big deal,” he says. “Eventually, they just become part of the soil profile.”

Since 2014, Sanderson has interseeded cover cops into V5 to V8 stage corn, partly due to time restrictions in north central Illinois for fall cover crop seeding after harvest. In most years, the only feasible route for cover crop seeding in the fall is aerial application, a costlier option Sanderson wishes to use sparingly.

Aerial seeding still plays a partial role in Sanderson’s operation, but overall he prefers a variety of seeding methods. Whether it’s frost-seeding red clover behind wheat in early March, or planting a mix of Austrian winter peas with radishes after wheat harvest, Sanderson says cycling application methods offers learning experiences about the best cover crops for different fields, but also a safety net that can’t be provided with universal applications. 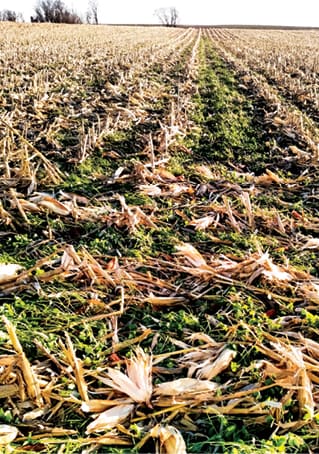 Interseeding Success. When it comes to interseeding, Trent Sanderson has enjoyed a 90% success rate with cover crop survival. When evaluating the health of varying fields during the fall harvest, he says even the sickest-looking crimson clover and annual rye grass end up surviving most of the time.

A typical corn field interseeded for Sanderson includes a 20-pound cover crop mix of annual rye grass and crimson clover. Specific compositions depend on what crop, corn or soybeans, is to follow.

By interseeding in the V5 to V8 growth stages, Sanderson says the cover crops can absorb sunlight and moisture, germinate, and grow just enough to get established.

“As the corn grows to form a canopy and the row shades, both cover crops go dormant and get spindly and thin, so there aren’t going to be any yield-robbing situations,” he says.

When it comes to interseeding, Sanderson has enjoyed a 90% success rate with cover crop survival. When evaluating the health of varying fields during the fall harvest, Sanderson says even the sickest-looking crimson clover and annual rye grass end up surviving most of the time.

“Fields that have thinner stands of corn actually have a taller, more mature cover crop stand due to increased sunlight penetration through the canopy quicker” he says. “In fields producing higher yields of corn, the cover crops seem to die off, but then they come back to life. It’s remarkable.”

While seasonal rainfall has varied considerably over the seasons, Sanderson says cover crop survival has remained consistent due to improved moisture retention in his soil, an advantage he credits to the strip-till transition. While 2016 produced only 6-7 inches of rainfall in June; residue in the inter-row regions of the strip-tilled fields helped the soil retain water, allowing for respectable yields in a dryer season.

Compared to June rainfall totals of 12-17 inches in 2014 and 2015, the only difference among the cover crops through the years was time of germination and cover crop height prior to dormancy.

Looking for the most affordable yet affective way to broadcast his cover crop seed, Sanderson’s current method combines an 8300 John Deere tractor, an old row cultivator, and a Gandy air seeder box into one interseeding system.

For Sanderson, the key was cutting costs at each possible step of the configuration process. The row cultivator was gathering dust in the fence row on his property, yet served as an effective base for the broadcast seeder. Sanderson also found and economic solution for his air seeder.

“We were able to buy for half the cost of a new seeder box which would have been $14,000 for a 16-outlet,” Sanderson says. “Then we got some hose equipped with deflector plates on the bottom from a local fertilizer dealer, so the seed strikes them and spreads it out in an even pattern.”

The lower 19-inch clearance height of the 8300 requires Sanderson to interseed before the V8 stage for corn with little flexibility, but from an operational standpoint, Sanderson considers the economical mixing and matching of tools and machinery a definite success.

“We used to use a three-point broadcast seeder and just drive as fast as we can across the field to spread it. It worked pretty well and was similar to an aerial application, but we wanted to get past the tops of the corn plants,” Sanderson says. “Our current setup allows us to get down closer to the soil profile and have a more consistent stand from row to row.”

Location: WI
The Fall 2021 National Cover Crop Summit is free-to-attend, 2-day online event that will feature a series of knowledge-building presentations led by 30+ of the foremost authorities on cover crops today. Requiring no travel expense or time away from the office or farm, you will be able to participate from the comfort of your own office through a series of online presentation videos delivering practical tips and information on managing cover crops to improve soil health, protect the environment and enhance on-farm profitability.
View Event
More Events